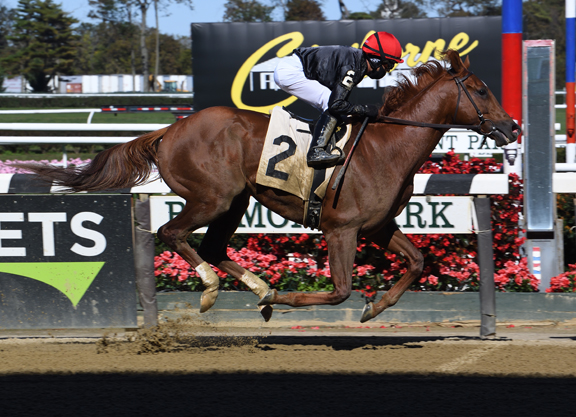 Phipps Stable and Claiborne Farm's Performer (Speightstown) looks to continue his hot streak as he takes his first crack at the highest level Saturday in Aqueduct's GI Cigar Mile. Graduating at second asking at Belmont in June 2019, the chestnut captured a 6 1/2-panel allowance at Saratoga that August and a 1 1/16-mile optional claimer at Belmont last September. Closing out his sophomore season with a victory in this venue's GIII Discovery S. just over a year ago, Performer was subsequently shelved and resurfaced with an optional claimer score in the mud at Belmont Oct. 17.

“He's training well. It has been a while since he ran, but he'll be fit enough,” trainer Shug McGaughey told the NYRA notes team. “He's been over that track before. He seems to be doing as well now as he's ever done.”

Grade I winner Firenze Fire (Poseidon's Warrior) poses one of the biggest threats to likely favorite Performer here. Transferred from Jason Servis to Kelly Breen following the former's federal indictment, the bay was fourth in the GI Carter H. June 6 and scored his first win for his new barn in Belmont's GII True North S. June 27. Fourth in Saratoga's GI Alfred G. Vanderbilt H. July 25, he was a disappointing 11th in a sloppy renewal of that venue's GI Forego S. Aug. 29. Capturing the GII Vosburgh Invitational S. back at Belmont Sept. 26, Firenze Fire rallied from well back to by third in the GI Breeders' Cup Sprint S. at Keeneland Nov. 7.

“He's doing well but right now the main concern is the weather,” admitted Breen. “If the track is sloppy, I don't think we're going to run. There are a couple of other options for him. But if the rain misses us, we're running. He's ready to go.”

Talented sophomore King Guillermo (Uncle Mo) takes on his elders in this return to action. Graduating in dominant fashion on turf in his second start at Gulfstream West last November, the bay was third in the grassy Pulpit S. in Hallandale Nov. 30. Switched back to the main track, he blew up the tote with a decisive score at 49-1 in the GII Tampa Bay Derby Mar. 7 and ran second to Nadal (Blame) in their division of the GI Arkansas Derby May 2. King Guillermo was a late defection from the Sept. 5 GI Kentucky Derby after spiking a fever just days before the race and displays a series of speedy drills at Gulfstream in the interim.

“He's good. He's ready,” conditioner Juan Avila said. “He's getting ready to face that challenge. The mile will be good for him because he's had seven months without a race.”

Mind Control (Stay Thirsty) could make some noise at a price here. The MGISW has not been at his best since racing resumed in June, but he is four-for-five at Aqueduct, including wins in the GIII Toboggan S. and GIII Tom Fool H. earlier this year.

“He's been right on cue and has been full of himself and he really loves training at Belmont,” said trainer Greg Sacco. “His energy level was high. We were happy with everything coming into this race.”

Earlier this season, the 4-year-old produced sub-par performance in sloppy renewals of the GI Carter H. at Belmont and Saratoga's GI Forego S., and according to Sacco, if Saturday's stormy forecast comes to fruition, the bay would likely bypass Aqueduct's feature race.

“It's unfortunate because he's training as good as ever and came out of the last race well,” Sacco said. “We were just hoping for a fast track and a little wetness on the track isn't the end of the world, but if the forecast holds true, it doesn't look like we'll be running [Saturday].”