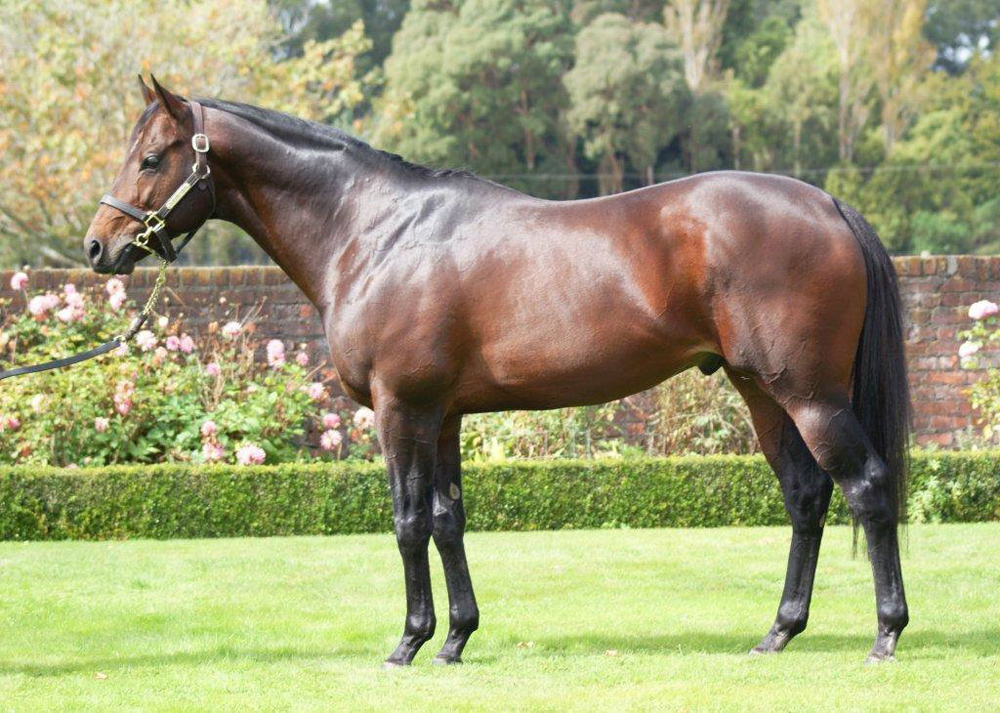 It would be wrong to say that Street Cry (Ire) (Machiavellian) was a rags-to-riches hero, bearing in mind that he started his stud career not in obscurity but on the Darley roster at a fee of $30,000. However, he far exceeded the expectations which could justifiably have been held about him, to the extent that his fee had multiplied by five within seven years of his going to stud. His premature death at the age of 16 in 2014 really was a blow not merely to Darley but to the whole bloodstock world.

Unsurprisingly, he is now turning out to have been an excellent sire of sires. One of his sons in particular is shooting up the rankings just as Street Cry himself formerly did: with his oldest offspring currently aged four, Per Incanto is shaping up as one of the most upwardly-mobile stallions in New Zealand.

Despite being placed in the GI Breeders' Cup Juvenile as a youngster in 2000, Street Cry did not win in graded stakes company until the age of four. Even though he retired to stud in 2003 with victories in the G1 Dubai World Cup at Nad Al Sheba and the GI Stephen Foster H. at Churchill Downs to his name, he still had plenty to prove in many people's eyes when he set out as a stallion. However, starting out by shuttling between Jonabell Farm in Kentucky and Northwood Park Stud in Victoria, he quickly proved his merit. His first-crop son Street Sense wrote himself into the record- books by becoming the first horse to complete the double of the GI Breeders' Cup Juvenile and GI Kentucky Derby, while his first-crop daughter Zenyatta went on to show herself to be one of the greatest race-mares in history.

His impact was almost as immediate Down Under, when his crop of 2005 included the high-class 3-year-olds Whobegotyou (Aus) and Predatory Pricer (Aus), as well as the excellent Shocking (Aus), runner-up in the G1 Queensland Derby at three before taking the G1 Melbourne Cup at four and the G1 Australian Cup at five. Street Cry continued to come up with high-class horses with each subsequent crop. His current representatives include a race-mare to rival Zenyatta for sustained excellence: Australia's reigning Horse of the Year Winx (Aus).

As Winx continues to thrive, so do several of the Street Cry horses who are standing at stud. Street Sense has so far come up with five individual U.S. Grade I winners, headed by three-time Grade I heroine Sweet Reason; while his two Australian Group 1 winners include Hallowed Crown (Aus), who now stands on the Darley roster in both hemispheres. Street Boss also has had top-level winners in both hemispheres, with his four U.S. Grade I winners headed by last year's GI Kentucky Oaks heroine Cathryn Sophia. Street Hero has struck in the U.S. with 2015 GI Eddie Read H. winner Gabriel Charles, while Shocking has made a good start in New Zealand where his three pattern winners are headed by last year's G1 NZ Oaks victrix Fanatic (NZ). Young unproven sires by Street Cry include the former dual Group 1-winning 2-year-old Pride Of Dubai (Aus), who is currently on a reverse-shuttling trip to Coolmore in Ireland; and 2013 GI Breeders' Cup Juvenile winner New Year's Day, who stands at Hill 'N Dale Farms in Kentucky. Carlton House, a Group 1 performer for the Queen in both hemispheres, entered stud at Darley's Kelvinside Stud in New South Wales in 2014 but no longer appears on the Darley roster.

Under the circumstances, with the benefit of hindsight we can say that the Williams family of Little Avondale Stud near Masterton in New Zealand pulled off a great coup when recruiting the lesser-known Street Cry horse Per Incanto in advance of the 2011 breeding season. The Williams family has been breeding good horses such as 1957 Melbourne Cup winner Straight Draw (NZ) (Faux Tirage {GB}) since the 1940s. At the same time they have made a habit of unearthing excellent stallions. Their first stallion was the excellent Sabean (GB) (Blue Peter {GB}), a relative of the mighty Hyperion (GB) (Gainsborough {GB}) who arrived from England in 1947. The following years brought both Agricola (GB) (Tiberius {GB}) and the outstanding Oncidium (GB) (Alcide {GB}), three times winner of the Dewar Trophy as leading NZ-based stallion on total Australasian seasonal progeny earnings. Per Incanto obviously has some way to go before he could be ranked alongside that trio, but he could hardly have made a better start.

Per Incanto was not an obvious horse to choose. He had been one of Italy's best 2-year-olds in 2006 before developing into a very good young sprinter there the following year, winning the G3 Premio Tudini over 1200 metres in Rome in the spring of 2007. His promise was clear at that stage, so much so that Sheikh Hamdan bin Rashid al Maktoum bought him and brought him to join his team in England in John Dunlop's stable. However, the horse lost his way after that. He achieved little for Dunlop during that season and the next one. A move to Kiaran McLaughlin's barn in the U.S. did not spark much of a revival, although he did win an allowance optional claimer over six furlongs at Aqueduct as a 5-year-old. By the time that Per Incanto was ready to find a place at stud, his credentials for such a job were easy to overlook. His merit was a distant memory even for people au fait with Italian form; for everyone else he was totally obscure.

Not for Little Avondale's Sam Williams, however. The bloodstock world had changed since the days of Oncidium. Nowadays breeders aspiring to produce Classic horses and high-class stayers are few and far between, even in New Zealand where the South East Asian export market for sprinter/milers is a now a bigger factor in most breeders' plans than the Melbourne Cup. Per Incanto's pedigree was interesting as it provided potential appeal to both old-school and modern-day breeders. Street Cry was showing himself capable of siring high-class horses at pretty much any distance, but the female side of Per Incanto's pedigree is stuffed with good sprinters. His fourth dam Waterloo (GB) (Bold Lad {Ire}) had been a Classic winner in England, taking the 1000 Guineas in 1972 over a mile. Waterloo's mating with the 1968 2000 Guineas and Derby winner Sir Ivor (Sir Gaylord) produced the good Henry Cecil-trained filly Water Frolic (Per Incanto's third dam). Water Frolic, a listed winner in the Ebbisham S. at Epsom in 1978, became a terrific sprinting broodmare. Her half-sister Water Woo (Tom Rolfe) produced the 1991 G1 Eclipse S. winner Environment Friend (GB) (Cozzene), but the best horses descending from Water Frolic have all been sprinters, many coming via her daughter Daffodil Fields (Ire) (Try My Best). Daffodil Fields's best colt was the Group 3-winning sprinter Naahy (GB) (Bahamian Bounty {GB}), while her best daughter was Pappa Reale (GB) (Indian Ridge {Ire}). The latter was a terrific sprinter in Italy before breeding not only Per Incanto but also another top Italian sprinter, Patapan (Stravinsky).

The upshot is that Per Incanto is turning out to be a massive asset to New Zealand's breeding industry. His arrival in the country at a first-season fee of NZ$4,000 attracted little fanfare, and his early books contained some unremarkable mares. From this low-key start he became the leading first-season sire in New Zealand in 2014/15 by winners, and runner-up in that season's 2-year-olds' sires' table. Last season he was the country's leading sire of 3-year-old winners and the country's leading second-season sire by numbers of winners. He had seven stakes-performed 3-year-olds during the term, second only in that respect in the country behind the proven top-class stallion Savabeel (Aus) (Zabeel {NZ}), who was represented by eight.

Per Incanto's outstanding start with his first juveniles in the 2014/15 season was headlined by the Group 1 performers Rocanto (NZ) and Dal Cielo (NZ). The former became his first stakes winner when taking the Matamata Slipper S. before being placed in both of New Zealand's principal 2-year-olds' races: the G1 Ellerslie Sires' Produce S. and the G1 Manawatu Sires' Produces S.; while Dal Cielo became his first Group 1 winner when landing the Ellerslie Sires' Produce S. in which Rocanto finished third. Also excelling that season was G2 Matamata Breeders' S. runner-up Nahema (NZ).

The following season Dal Cielo went over to Australia to register minor placings in some of Melbourne's top 3-year-olds' races, while Per Incanto's second crop quickly threw up another smart juvenile when Tennessee (NZ) landed the Wellesley S. at Trentham in the spring. Saracino (NZ) emerged as one of New Zealand's top juveniles later in the season before going on to show himself to be a high-class 3-year-old this term on both sides of the Tasman. In Melbourne he won the G2 Danehill S. over 1200 metres at Flemington early in the spring. Back home he had already defeated older horses in the G2 Foxbridge Plate over 1200 metres at Te Rapa, while he has subsequently finished third in New Zealand's principal weight-for-age sprint, the G1 Waikato Sprint over 1400 metres at Te Rapa last weekend. Another Group 1 performer for Per Incanto this season has been G1 NZ 1000 Guineas place-getter Sweepstake.

Per Incanto's success has not gone unnoticed. His only yearling sold in the recent NZB Premier Sale at Karaka fetched NZ$250,000. He had four six-figure lots in the Select Sale headed by the Little Avondale Stud-consigned daughter of Grable (NZ) (Pins {Aus}) who was knocked down to Redgum Racing of Victoria for NZ$300,000. Having started out at a stud fee of NZ$4,000 and then NZ$5,000, he commanded NZ$15,000 last spring, and it is easy to see his fee rising further still. He was a sprinter himself and comes from a family of sprinters, so it is no surprise that his good winners so far have come at distances no farther than a mile. However, Street Cry was an influence for class across the distance spectrum (the 47 Group/Grade 1 victories so far registered by sons and daughters of Street Cry have come at distances from 1200 metres to 3200 metres) and it is easy to see Per Incanto siring high-class winners over middle and longer distances once he is being represented by sons and daughters from more stoutly-bred mares than he has generally covered so far.

These are exciting times in breeding circles in New Zealand. Some very good horses have retired to stud in the country in recent seasons. Per Incanto has quickly established himself as one of the country's best stallions, setting standards of maximising opportunities and upgrading mares to which all sires should aspire.