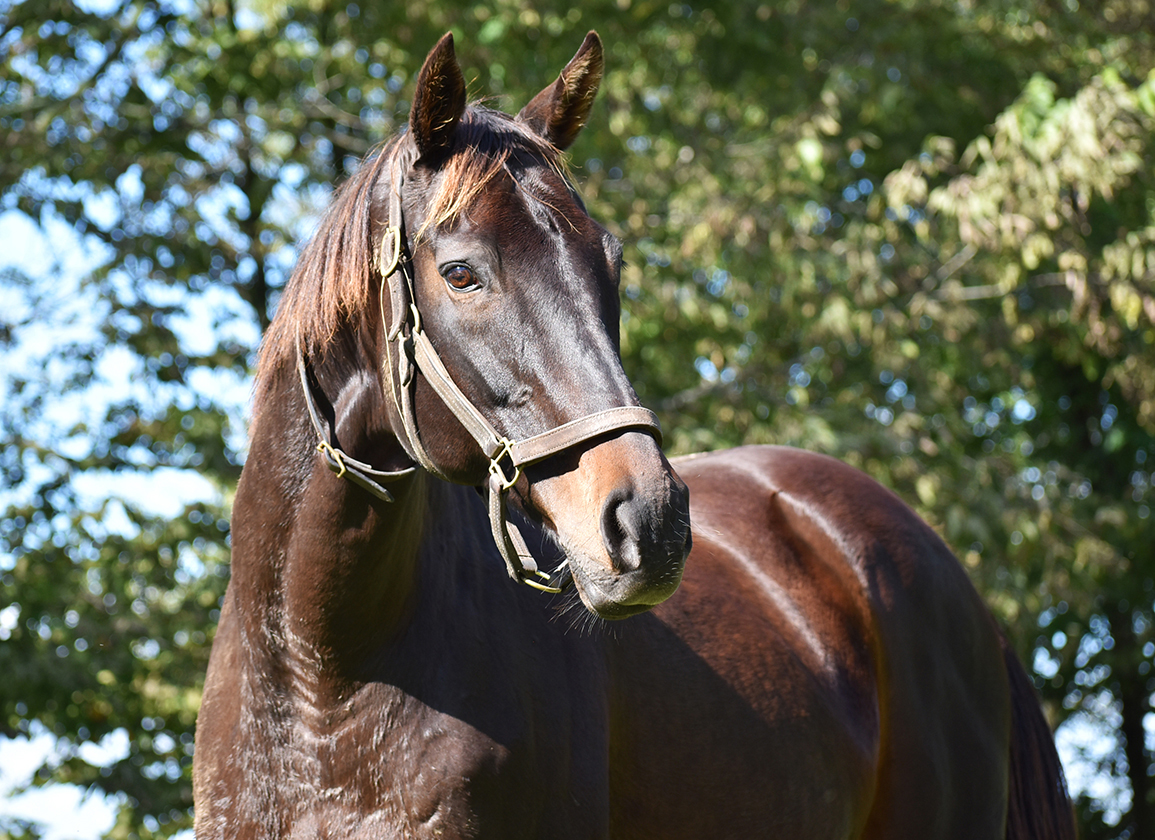 New Vocations Thoroughbred Program Director Anna Ford will never forget the excitement she felt watching the 2009 GI Breeders' Cup Ladies Classic as 16-1 shot Mushka (Empire Maker) kept passing one horse afer another in the stretch to close for second. As a horse taking part in the first ever New Vocations Breeders' Cup Pledge program, Mushka's performance meant a $36,000 donation from owner Betty Moran. It was a lifeline for a growing charity dedicated to finding second homes for the sport's retirees.

After finishing her racing career, Mushka, now 16, wound up with SF Bloodstock as a broodmare. Over the years, she produced five foals and had two winners. But she had fertility problems as she got older and was barren in each of the last three years. It was time to find her a new home.

“As time has gone by it's become impossible for her to maintain a pregnancy,” said Tom Ryan of SF Bloodstock. “Rather than continuing to force the issue with a 90% chance of the same outcome we felt it was time to let her retire.”

Ryan reached out to New Vocations asking about retirement options. New Vocations itself was not a perfect fit as its focus is on retraining retirees for second careers. At her age, Mushka was not a good candidate for that program. So Ford turned to New Vocations' partners at Mereworth Farm. 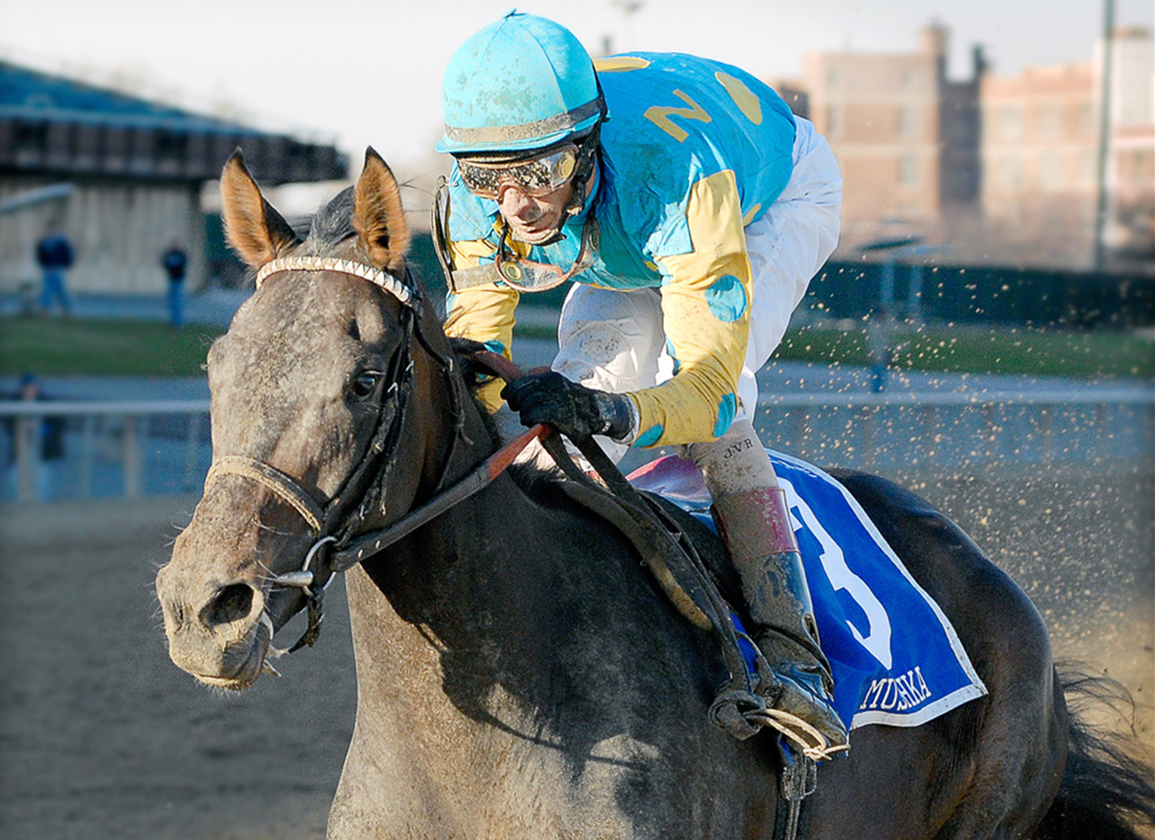 Mushka wins the Demoiselle as a 2yo in 2007 | Sarah Andrew

In 2015, New Vocations was given a free long-term lease of 85 acres on Mereworth Farm in Lexington by the Susan S. Donaldson Foundation. When Donaldson, who acquired the farm in 1986, passed away in 2011, Mereworth was home to 130 retired broodmares, all of which she owned. She left money for the farm to be run so that her retired broodmares could spend their lives roaming around the fields.

Soon thereafter, Mereworth opened its doors to outside horses and now cares for 170 retirees. The farm's mission is to provide lifelong care for unwanted horses that would otherwise be threatened with euthanasia because of injury or old age.

Mereworth is still guided by Donaldson's vision, that all retired race horses deserve a home and pampering.

“Mereworth the best kept secret in the horse business,” said Mereworth Farm Manager Jimmy Boyd. “Its like working in a nursing home. But at the same time if we have a 25-year-old mare who is colicking she's going to go to the hospital and get colic surgery. And she'll be well taken care of.”

With New Vocations and Mereworth having joined forces, the farm has the best of both worlds. New Vocations handles the horses that are good candidates for a second career and adoption. Mereworth takes in those who aren't able to go on to another career.

“It's been a great partnership, a dream partnership,” said Ford, who added that New Vocations normally sends about five or six horses a year to Mereworth.

“There are those horses who can't go on to a second career. Mereworth Farm does such a phenomenal job with the long-term lifetime care of these horses. That's something that we, unfortunately, are not able to provide on our own. That they can do this means the world.”

New Vocations was founded in 1992 and has grown into the sport's largest racehorse adoption program. To get there, it has had to be creative and proactive when it comes to raising money. In 2009, it came up with an initiative in which owners of Breeders' Cup horses were solicited to pledge a portion of the horse's earnings from the Breeders' Cup races to New Vocations. They had just five pledges that first year. Among them was Moran's promise to donate 10% of Mushka's earnings.

“I'll never forget the first year that we came up with the idea of doing the Breeders' Cup pledge in 2009,” Ford said. “It was an unknown and we didn't know if it was going to work or how it would be received. Going into the Distaff, we were really rooting for Mushka. Betty was such a great supporter and there was the fact that her pledge was so generous. She ran second and that really meant a lot. At the end of the day, that donation lodged what we've now been doing for 12 years.”

During her career, Mushka won the GI Spinster S. via disqualification as well as the GII Demoiselle S. and the GIII Glens Falls H. She earned $1,067,788.
That New Vocations, which serves more than 600 horses each year is able to take in so many horses has a lot to do with the success of the Breeders' Cup pledge program, which has become its largest fundraiser. Many of the biggest owners and trainers in the sport have come on board. The list of those who have taken part over the years totals more than 150 individuals, stables and farms and includes the likes of Sol Kumin, Bobby Flay, WinStar Farm, Spendthrift Farm, Todd Pletcher, Chad Brown, Stonestreet Stables. Mrs. John Magnier, Seth Klarman and West Point Thoroughbreds. Last year, 50 Breeders' Cup starters were part of the pledge program and New Vocations raised $150,000.

That's allowed New Vocations to open its doors to thousands of horses. Now, Mushka, who kickstarted the pledge program, is among them, which means she'll live out her life in comfort.

“When SF reached out to us saying they had a retired broodmare for us and it was Mushka we were thrilled,” Ford said. “It's great to be able to give her the special type of retirement she deserves.”

New Vocations and Mereworth Farm are both accredited by the Thoroughbred Aftercare Alliance, the official aftercare partner of the Breeders' Cup.