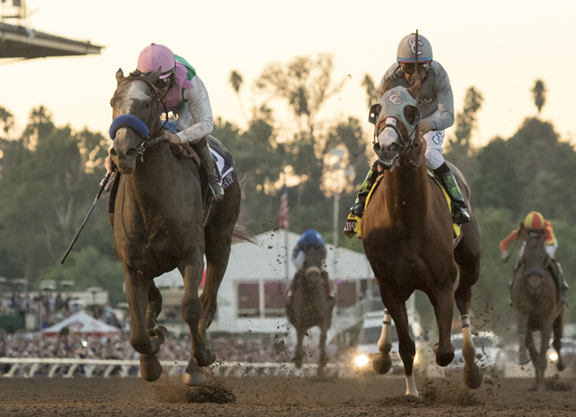 Already contemplating changes that could make future runnings of the $12-million GI Pegasus World Cup bigger and better, the Stronach Group is seriously considering moving the race to Santa Anita for the 2018 edition.

“Nothing has been confirmed, but, yes, there have been internal discussions about going to Santa Anita next year,” said Mike Rogers, the Stronach Group's President of Racing. “The ultimate decision will be made by Frank and Belinda Stronach. While a beautiful facility, Gulfstream is a small facility and that has created challenges for us, challenges we are trying to work through. Santa Anita is a much bigger facility and many big events have been pulled off there.”

Rogers added that should the race move to Santa Anita, that does not mean the Southern California track will become its permanent home and that a Santa Anita-Gulfstream rotation is a possibility.

One downside of moving the Pegasus to Santa Anita is that the symbol of the race is the mammoth Pegasus statue at Gulfstream. It is 110 feet tall, 200 feet in length and 115 feet in width, and is the second biggest statue in the U.S., with only the Statue of Liberty being larger. It is far too big to be moved to Santa Anita, at least at any sort of reasonable cost. Rogers believes the Pegasus and Stronach brands are strong enough that running the race some 2,300 miles removed from the statue won't be a major issue.

“No matter where the race takes place, our branding is strong, Santa Anita and Gulfstream are both Stronach tracks and we think the race is going to develop a great reputation,” he said. “The race will still be branded the same way, even if it is in a different location.”

One complaint often heard about this year's race is that it should be run at 1 1/4 miles instead of 1 1/8 miles because at Gulfstream horses breaking from outside posts in nine-furlong races are at a disadvantage. Rogers said that changing the distance to 10 furlongs is one of many things on the table.

“The stakeholders are becoming an integral part of the process,” Rogers said. “Right now, everybody is excited about this year's race. After the race we are going to sit down as a group and talk about adjustments we can make that will make the race even better. That could include changing the distance. It's great to see how engaged the stakeholders have become in the process. We're trying to create a big event. It is unfolding well and we hope that it will grow and that everyone will have a great experience this year. Afterward, we're going to have a white board and look at ways of making it better. Nothing is off the table.”

Though the Pegasus is just one month away, the field is still far from certain as several stakeholders do not have horses that fit the race and have yet to make a deal with people owning top class horses that can take their slots. Yet, the Pegasus has attracted the top two horses in racing in California Chrome (Lucky Pulpit) and Arrogate (Unbrided's Song). No matter who else may run, the presence of the “Big Two” all but ensures that the inaugural Pegasus will be a big hit.

“Without this race, we never would have seen a rematch between Arrogate and California Chrome,” Rogers said. “Just a little more than two months after they put on an incredible race in the [GI] Breeders' Cup [Classic] they're going to do it all over again. That provides a very important milestone for this race and, I think, guarantees it will be a success.”

One thing the Stronach Group will continue to do is search for foreign horses to take part in the race. Not only does that add an international flare to the event, but it has the potential to open up important simulcasting markets across the globe. There will be at least one foreign starter this year as stakeholder Jim McIngvale has purchased Eragon (Arg) (Offlee Wild), a three time Group 1 inner in Argentina, to fill his spot.

Rogers said the connections of at least two other foreign horses have expressed interest in competing in the race. One is Gun Pit (Aus) (Dubawi {Ire}), who is Hong Kong's top dirt horse and is undefeated in seven dirt tries at home. He was also second in the G1 Maktoum Challenge Round 3 last year. The other is Big Daddy (Chi) (Grand Daddy), who is based in Chile. He is a three-time Group 1 winner.