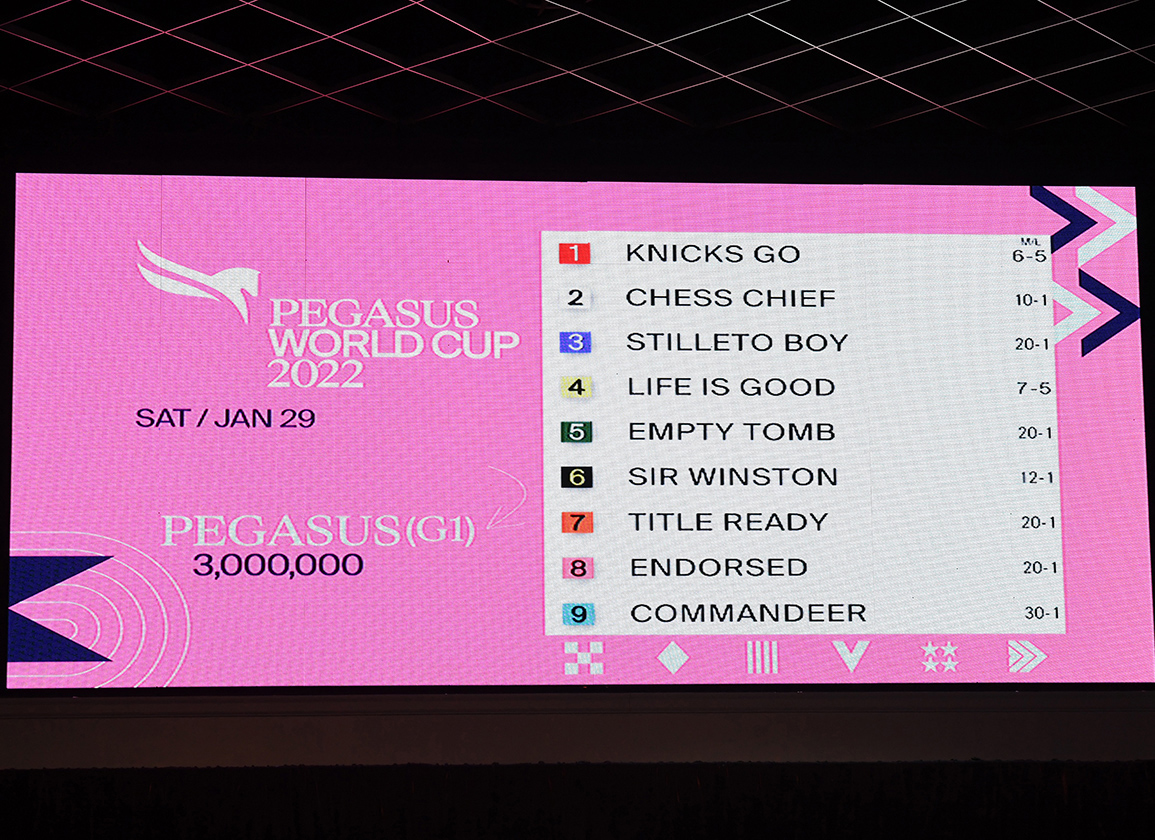 HALLANDALE, FL–During Tuesday's Pegasus World Cup Invitational post-position draw in the Sport of Kings Theatre at Gulfstream Park Tuesday, the stage was set for what is shaping up to be another intriguing renewal of Pegasus World Cup Invitational, including the PWC Turf and the newest addition to the World Cup series, the Filly and Mare Turf Invitational, which replaces the GIII Marshua's River S. Heading Saturday's Pegasus card is the nine-furlong main-track test for older horses, led by defending champion Korea Racing Authority's Knicks Go (Paynter) and WinStar Farm and CHC LLC's Life Is Good (Into Mischief).

Regular rider Joel Rosario is set to ride the 6-5 morning line favorite in his final race before retiring to Taylor Made Stallions.

He added, “It's the same approach we took in the Breeders' Cup. We'll see how it goes. He's proven at a mile and an eighth and he does like the surface there. He likes the configuration of the racetrack there at Gulfstream–he proved that last year. We're just going to come out of there running and see what happens.”

Pletcher confirmed soon after the draw that he was pleased with Life Is Good's position in the gate. Reunited with Irad Ortiz Jr., the bay was installed the second choice on the morning line at 7-5.

“You've got two super talented horses with similar running styles, so it makes for a very exciting race,” said Pletcher. “It's going to be very exciting to see how the pace unfolds. Speed is our horse's weapon and we're not looking to take it away from him, and I'm sure the Knicks Go team knows what works for their horse. We'll just see how it plays out.”

Also in the field is 2019 GI Belmont S. winner Sir Winston (Awesome Again), victorious in the GIII Valedictory S. at Woodbine Dec. 3. The Tracy Farmer-owned 6-year-old drew post 6 and will be accompanied by Edwin Gonzalez. He is 12-1 on the morning line.

“He needs a lot of things to go his way,” said trainer Mark Casse. “He's feeling really well, and we believe he deserves a chance.”

It's All About the Turf..

As is the case in the day's big race, the Pegasus World Cup Turf Invitational also features a returning Pegasus champion. Hoping to defend his Turf title is Robert and Lawana Low's Colonel Liam (Liam's Map), who will be breaking from post 6 after being installed the 3-1 early choice. The dual Grade I winner hasn't been seen since finishing eighth in the GI Manhattan S. last June. Prior to that effort, the grey won the GI Turf Classic at Churchill Downs in May.

“I think over the years we've done pretty well in layoff situations, so I think it was important that we got the works into him that we did and we were fortunate enough that everything went according to the way we mapped it out,” explained Pletcher. “So, I feel good about that. You never know if they're going to be quite as sharp off a layoff, but he's certainly trained well enough and has run well fresh before. Hopefully, we can get the same type of effort. He's given us every indication that he's come up to it as good as ever.”

The 5-year-old will be ridden by Irad Ortiz Jr.

Pletcher is also represented by Repole Stable's Never Surprised (Constitution), who drew less favorably than his barn mate in post 12. Scheduled to be ridden by Luis Saez, he is the 7-2 second choice on the morning line.

“That's not really an ideal post for him,” Pletcher admitted.

The 4-year-old won his last two stakes starts over a mile and a sixteenth, including the most recent in the Tropical Park Derby Dec. 26.

New to the series this year, the GI Pegasus World Cup Filly and Mare Turf Invitational offers up a competitive group, including a pair of top-shelf winners–GI Natalma S. heroine Lady Speightspeare (Speightstown), who exits post 3 (8-1) and early 2-1 favorite Regal Glory (Animal Kingdom), who will break from the 4 hole. Trained by Chad Brown on behalf of Peter Brant, the latter broke through at the highest level in her latest start in the GI Matriarch S. at Del Mar Nov. 28.

Also in the fray is Sweet Melania (American Pharoah), victorious in Gulfstream's GIII Suwanee River S. in her latest start. From the same connections as Pegasus World Cup contender Life Is Good, the chestnut, who is 5-1 on the morning line, drew the rail and will be accompanied by Luis Saez.

Representing long-time Fort Lauderdale resident Chris Pallas is Shifty She (Gone Astray), who was second most recently in the Suwanee River. The Florida-bred won three of four starts as a 3-year-old in 2019 before going to the sidelines with a tendon injury. Since her return in April with new trainer Saffie Joseph Jr., she won three of seven starts, including Belmont's GIII Noble Damsel S. Oct. 23. Listed at 6-1 on the morning line, she breaks from post 9.

“I was numb for three days after [the Noble Damsel],” said Pallas. “It was amazing. She had two really sharp works [at Gulfstream] and when you're an owner and you can come and watch the workouts, you learn a lot more about your horse than at a race. I knew she was ready to run..She ran them off their feet. She just did her thing.”

Trainer Michael McCarthy will saddle Nicest (Ire) (American Pharoah), who exits post 7 under Tyler Gaffalione. Listed as 6-1 on the morning line, she was third behind the ill-fated Snowfall in the G1 Juddmonte Irish Oaks and G2 Ribblesdale S. at Royal Ascot before arriving stateside. In her most recent start, she was second in the off-the-turf GI American Oaks at Santa Anita Dec. 26.