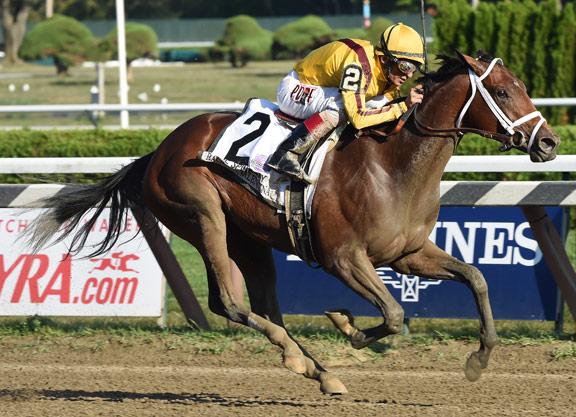 To the unbridled joy of Rachel Alexandra's countless admirers, the 2009 Horse of the Year appears to be making an ideal start to her broodmare career. Each of her first two foals–the Curlin colt Jess's Dream and the Bernardini filly Rachel's Valentina–were named a 'TDN Rising Stars' during the Saratoga meet in August. And now Rachel's Valentina has wasted no time in justifying this accolade, returning to Saratoga to become a GI winner in the Spinaway S.

Of course the birth of Rachel's Valentina wasn't without a price. Soon afterwards Rachel Alexandra was found to have suffered a damaged section of colon, which required removal, and she hasn't been bred since. Fortunately Stonestreet at least now have a daughter of similar promise, plus a winning sister in the $700,000 Samantha Nicole.

The uninitiated much think it is simply a matter of course that a mare of Rachel Alexandra's huge talent would quickly become the dam of a Grade I winner, but I'm afraid that the breeding of racehorses is rarely so straightforward.

In 2010, when the Blood-Horse used the Jockey Club's database to analyse the records of more than 65,000 broodmares, they did find that Grade I-winning mares were indeed more successful as broodmares than less well-qualified individuals. Apparently, foals from Grade I-winning mares earn more than 2.3 times the average and are five times more likely to win a graded stake than the norm.

I should quickly add, though, that the 462 Grade I-winning mares in the study produced 4,226 named foals and only 103 of the 4,226 became Grade I winners. That's 2.44%, or one in every 41, which puts into perspective Rachel Alexandra's feat of producing a Grade I winner as her second foal. For the record, the study showed that only 0.39% of all second foals develop into Grade I winners. If that sounds frighteningly low, it is one of the highest percentages in the birth order of foals, very similar to the figures for third, fourth and fifth foals.

Although this study told us that Grade I-winning fillies have the brightest future as producers, there are inevitably some serious disappointments among the very good fillies and mares which occasionally proved equal to defeating the males.

I thought it might be interesting to look at the other mares which, like Rachel Alexandra, have been voted Horse of the Year in living memory.

Calumet's Twilight Tear was the standout performer of 1944, when this daughter of Bull Lea enjoyed an 11-race winning sequence in building a record of 14 wins from 17 starts. In beating the males in the Pimlico Special, she equalled Seabiscuit's time for the event.

So how did Twilight Tear fare as a producer? The answer is pretty well. Her Blenheim II filly A Gleam compiled a record of 30-12-8-7, ranking among the best 2-year-old fillies of 1951 before becoming the queen of the 3-year-old fillies on the West Coast.

Twilight Tear's Alibhai gelding Bardstown wasn't nearly as precocious, but he shone from the ages of four to seven, retiring with earnings of over $600,000–a very large figure for that era–thanks partly to valuable victories in the Gulfstream Park H. and two editions of the Widener H.

Another filly was voted Horse of the Year in 1945, this being the highly accomplished Busher, whose impressive list of awards included those for 2-year-old filly, 3-year-old filly and handicap mare. In a year when racing was prohibited for four months, Busher still managed to clock up nine stakes victories and compile record earnings for a filly. The daughter of War Admiral and Baby League didn't have many foals, but one of them was Jet Action, who received 121 on the Blood-Horse Handicap for 3-Year-Olds in 1954. Busher's grand-daughter Bushfield also made an impact as a broodmare, with the Grade I winners Beau's Eagle, Favorite Funtime and Bishop Court Hill among her descendants.

Next in line comes the remarkable 1965 2-year-old filly Moccasin–that is, if you are prepared to include the awards from the Thoroughbred Racing Association and Turf & Sport Digest, rather than just the Daily Racing Form (which opted for the 4-year-old gelding Roman Brother).

Moccasin's claims rested on an unbeaten record of eight victories. This daughter of Nantallah and Rough Shod II was once described by Frank Talmadge Phelps as an “immense filly of 161/2 hands with feet nearly as large as a draughthorse's.” She made the most of her physique, with a sequence of impressive displays. Such was her charisma that she topped two polls for Horse of the Year, even though she was weighted 6lb below the best of the juvenile colts–an individual called Buckpasser, who had triumphed in nine of his 11 starts.

Many of you will recognize that Moccasin's parentage made her a sister not only to the high-class Ridan and the very smart Lt Stevens, but also to the stakes-placed Thong. Needless to say, few broodmares make as enormous an impact as Thong, who numbers Nureyev, Sadler's Wells, Fairy King and Blame among her many notable descendants. That said, Moccasin also had an impressive record, producing the champion 2-year-old Apalachee, his fellow Irish Group winners Nantequos, Brahms and Belted Earl and the stakes-winning fillies Scuff and Flippers. More recently there have been Grade I wins for Bandini, out of a grand-daughter of Flippers, and Winning Prize, out of a great-grand-daughter of Scuff.

It is highly unusual to see a foreign-trained horse take Horse of the Year honors in the U.S., but Daniel Wildenstein's filly All Along did so in 1983. This grand-daughter of Round Table did so by adding decisive wins in the Rothmans International, Turf Classic and Washington D.C. International to her victory over 25 others in the Arc.

It is hard to imagine nowadays that fillies occupied the first four places in that particular Arc or that All Along was the fifth consecutive filly to win the Arc. Indeed she was the eighth in the space of 12 years. The next 24 years saw only one filly or mare win the Arc–Urban Sea in 1993–but we appear to be back in a female-centric period, with Zarkava, Danedream, Solemia and Treve taking five of the last seven editions.

All Along made an encouraging start as a broodmare in 1988, when her unimaginatively-named son Along All figured among the best European juveniles. Sadly she failed to produce another group winner and the family doesn't appear to be flourishing. Another of these Arc-winning fillies, the magnificent Allez France, produced just one foal of any note–her Group 3-winning Nureyev filly Action Francaise, who has two Group 3 winners to her credit.

On a much more positive note, Urban Sea ranks among the best broodmares of all time, as the dam of Galileo, Sea The Stars and six other stakes winners. Then there's Detroit, the 1980 winner who matched Urban Sea's feat of producing an Arc-winning son, namely the 1994 winner Carnegie. And don't forget Gold River, the 1981 winner who had three smart performers among her first four foals, only to fall victim to a lightning strike.

To get back to America's female Horses of the Year, Lady's Secret justifiably became everyone's favorite during a career which saw her amass 25 wins and nine seconds during a 45-race career. One of her wins came against the males in the GI Whitney H. Sadly the grey daughter of Secretariat proved nowhere near as effective as a broodmare, with only five winners–none of them a black-type earner–among her 12 foals. The only silver lining has been a Group 2 Japanese winner out of one of her daughters.

Japan, of course, is now also home to Azeri, where the 2002 Horse of the Year has 2013 and 2014 colts by the outstanding Deep Impact. She hasn't yet hit the Grade I target as a broodmare, but she wasn't far off with her Ghostzapper filly Wine Princess, a Grade II winner who was also Grade I placed.

It is going to be fascinating to watch the development of the broodmare careers of the latest female Horses of the Year. The ultra-charismatic Zenyatta hasn't had much luck so far, as her 2014 War Front filly died and she wasn't bred that year. However, there is her 2-year-old Tapit colt Ziconic to look forward to and she was bred to War Front this year. It's hardly surprising that the 2011 heroine Havre de Grace has visited the same two stallions. This $10,000,000 daughter of Saint Liam has a 2014 Tapit filly and a 2015 War Front colt.

Rating: A+. Click for the eNicks report & 5-cross pedigree.

Click for the Equibase.com chart, the TJCIS PPs or the free Equineline.com catalogue-style pedigree. VIDEO, sponsored by Fasig-Tipton.

This story was posted in Shared News and tagged Pedigree Insights, Rachel's Valentina.