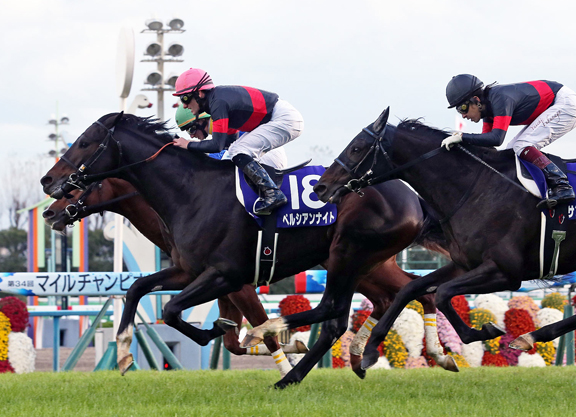 Almost exactly 30 years ago, I was lucky enough to visit Japan as a guest of the JRA, to report on the Japan Cup and international jockeys’ series. Because of my interest in bloodstock, I was also treated to a tour of the stallion farms on Hokkaido.

The vast majority of the stallions I saw were imports, including the Derby heroes Grundy and Empery and the Irish Derby winner Tyrnavos. Other notables included Northern Taste, a Prix de la Foret winner who had become the dominant force in Japanese breeding, and Linamix’s classic-winning sire Mendez. Then there were the likes of Junius (Middle Park S.), Pas de Seul (Prix de la Foret), No Lute (Prix Lupin), Gay Mecene (Grand Prix de Saint-Cloud), Saint Estephe (Coronation Cup) and Crystal Glitters (twice a winner of the Prix d’Ispahan).

This foreign invasion was reflected on Japan’s leading sires’ table for 1987. With Northern Taste leading the way, there were 14 imports among the top 20, comprising eight from the U.S., two from Canada, two from Ireland and one each from Britain and France. Only one Japanese horse, Tosho Boy, ranked among the top eight.

It was a similar situation here in Europe. The top 20 on the 1987 Anglo-Irish table featured 11 stallions carrying the (USA) suffix and another from Canada, with the American-breds Mill Reef, Riverman, Nureyev, Alleged and Be My Guest occupying five of the top six places.

Despite their birth place, all five of these stallions had done their racing in Europe and they demonstrate how breeders worldwide usually prefer to use stallions which have proved themselves under local conditions.

American-bred stallions are few and far between on this year’s leading sires’ list in Britain and Ireland, the highest-ranked being War Front in 14th place. The Japanese industry has gone very much the same way, thanks largely to the remarkable Sunday Silence. This American-bred transformed the Japanese thoroughbred to such an extent that his sons still occupy seven of the top 12 places on the current sires’ table. In fact, there are only three stallions in the top 20 who did their racing outside Japan (although the likes of King Kamehameha, Kurofune, South Vigorous, Kinshasa No Kiseki and Symboli Kris S. were conceived or foaled elsewhere).

The few exceptions in the top 20 include 13th-ranked Empire Maker (now back in the U.S.) and 20th-ranked Sinister Minister. These two, together with the American-breds Kurofune and South Vigorous, owe their high positions largely to their Japanese dirt runners.

The only European interloper among the top 20 is the British-bred Harbinger, who will always be best remembered for his imperious 11-length victory over Cape Blanco in the 2010 King George. That performance–on his first appearance at Group 1 level–was a marked step up on Harbinger’s previous form, even though he had won the G3 Gordon S. at three and was unbeaten in three previous appearances at four.

Timeform considered his King George display to be worthy of a rating of 140, which put him among some very select company, and Harbinger was officially rated the best horse in the world. Unfortunately, within weeks, Harbinger had fractured his near-fore cannon bone and his career was over before he had had a chance to confirm his superstar status. By early September the son of Dansili had been sold to the Shadai Group.

Shadai’s interest in Harbinger no doubt owed a lot to the farm’s need to find a suitable outcross for the legions of Japanese mares descending from Sunday Silence. The ploy seems to be working. Harbinger’s first runners reached the track in 2014, when he became Japan’s leading first-crop sire. Since then has quickly established himself among the leading sires. Despite having 223 runners, compared to King Kamehameha’s 569, Harbinger reached 16th place on the 2015 sires’ table and he progressed to 13th place last year. Now he is up to eighth and a highly-rewarding autumn has shown he can sire Group 1 winners–not once, not twice but three times.

The first to hit the heights was Deirdre, who in mid-October landed the mile-and-a-quarter Shuka Sho, the last leg of the so-called Triple Tiara. In an 18-runner field, Harbinger was also responsible for the third-placed Mozu Katchan. This filly, who had finished second in the Japanese Oaks, turned the tables on Deirdre when they met again in the G1 Queen Elizabeth II Cup over an extra furlong. This time Mozu Katchan came out best in a three-way finish.

Then, a week later, Harbinger’s son Persian Knight came out on top in another tight finish, this time in the G1 Mile Championship. Persian Knight clearly isn’t short of speed, even though he had tackled Japan’s 2000 Guineas and Derby equivalents over a mile and a quarter and a mile and a half earlier in the year.

Harbinger sired Deirdre from a granddaughter of Sunday Silence, sired by his Japanese Derby and Japan Cup-winning son Special Week. And Persian Knight has a dam by Sunday Silence, so the signs are encouraging that Harbinger is indeed going to prove a very useful outcross at Shadai. Even Mozu Katchan highlights his potential value to the Shadai team. Although she has no Sunday Silence blood, she is out of a daughter of another of Shadai’s champion sires, the Japanese Derby winner King Kamehameha.

Persian Knight also has a second dam by Nureyev, namely the three-time French winner Nikiya. During a long career, Nikiya produced 12 foals in Japan and all but one of them were sired either by Sunday Silence or one of his sons. She struck gold with Sunday Silence when she produced a 1999 colt named Gold Allure. This brother to Persian Knight’s dam Orient Charm developed into a leading dirt performer, with the Japan Dirt Derby and the February S. among his best wins. Gold Allure has since passed on his prowess on dirt to numerous good winners and regularly ranks among Japan’s top two dirt stallions, topping the dirt statistics on two occasions.

With a background like this, Persian Knight surely has a future as a stallion, especially if he can add another Group 1 win or two to his record.