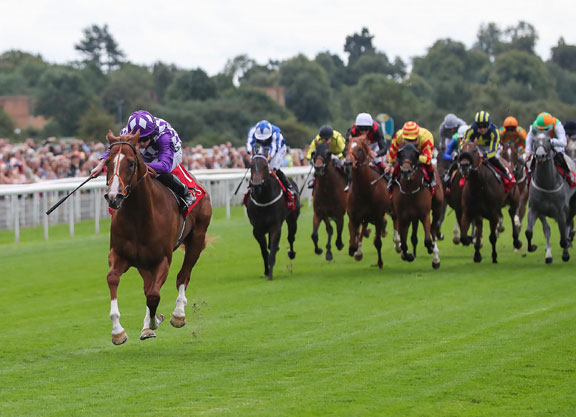 Sadly, the stallion career of the hugely popular Giant's Causeway petered out a little earlier than his many admirers would have wanted, with the champion son of Storm Cat being credited with only 15 foals in 2018, the year he covered nine mares before his death in April. He was 21 at the time, whereas Storm Cat was 26 when his last few foals were born and lived to be 30. However, Giant's Causeway had been considerably busier than his sire, thanks partly to his being shuttled to Australia and South America. Equineline credits him with 2,548 foals of racing age (with his final total set to be a little higher), compared to Storm Cat's 1,452.

It is already clear that Giant's Causeway's worldwide legacy is going to be considerable. The news came a few weeks ago that his top-class turf son Bricks and Mortar, now a four-time Grade I winner following his success in the Arlington Million, will spend his stallion career at Shadai Farm in Japan, where the deaths of Deep Impact and King Kamehameha have left something of a void. American breeders still have several other young sons of Giant's Causeway, such as the promising Creative Cause and the yet-to-be-proven Carpe Diem, Not This Time and Brody's Cause.

Last week also saw several of Giant's Causeway's grandsons continue in fine form, on both sides of the Atlantic. In the U.S., the Eskendereya colt Mitole cruised to victory in the GI Forego S. to record his ninth success in a 13-race career and his third Grade I success of the year. This impressive 4-year-old also earned himself a place in the Spendthrift Farm stallion team.

Over in Europe it was the turn of Footstepsinthesand, winner of the 2005 2,000 Guineas, to make an impact on the 2-year-old scene, in much the same way that another of Giant's

Causeway's European Classic winners, Shamardal, has been doing. Two of Footstepsinthesand's juvenile sons scored valuable victories on consecutive days at York, with Threat taking the G2 Gimcrack S. a day after Mums Tipple turned in a breath-taking display over the same course and distance in the Goffs UK Premier Yearling S. Thanks to their efforts, the Coolmore veteran–he's 18 next year–now tops the Anglo-Irish table of sires of 2-year-olds, ahead of No Nay Never, Cable Bay and Galileo.

Noone could say that Threat didn't deserve an important success, following his second places–beaten less than a length each time–behind Arizona in the G2 Coventry S. and Golden Horde in the G2 Richmond S. While Threat's win in the Gimcrack carried more prestige, as a Group 2 event, than Goffs UK Premier Yearling S., his performance left him ranking no higher than joint-eighth, by Racing Post ratings, among Europe's 2-year-olds.

Mums Tipple, on the other hand, shot up to second in the rankings, his figure of 119 placing him between Shamardal's sons Pinatubo (121) and Earthlight (118). Altogether Giant's Causeway ranks as the grandsire of four of the top nine. This isn't too surprising, as Footstepsinthesand and Shamardal were both unbeaten 2-year-old group winners from Giant's Causeway's one and only Irish crop. That said, Shamardal was officially rated the best of his generation, on 123, whereas Footstepsinthesand only scraped into the classification, on 110. Giant's Causeway was also unbeaten at two, when he was officially rated joint second with Distant Music on 120, behind the runaway leader Fasliyev on 125. Although his Classic success suggests that Footstepsinthesand was undoubtedly more effective at three than two, several of his progeny have become group winners at two, with Larchmont Lad, Formosina, Sandiva, Sent From Heaven and Marie's Diamond preceding Threat. It will surely be only a matter of time before Mums Tipple's name is added to the list, judging by the way he strode 11-lengths clear in a 21-horse field at York. This €45,000 yearling has a pedigree which suggests he should have no problems staying a mile. His dam Colomone Cross never finished better than seventh in four starts in Ireland and she has never made a big splash in the sales ring, though her Mastercraftsman colt sold for €55,000 as a foal in 2013. Other foals have sold for as little as 2,800gns and €1,000. However, she has the attraction of being a daughter of Xaar, the outstanding 2-year-old of 1997, when his Group 1 victories in the Prix de la Salamandre and Dewhurst S. resulted in his being rated 8lbs superior to the next-best juvenile. Although less successful at three and four, Xaar was placed in both the Irish Champion S. and Eclipse S., so he was suited by a mile and a quarter. As a broodmare sire, Xaar has already been represented by a star in the dual Derby winner Harzand, and the Australian filly Yankee Rose was a major Group 1 winner over seven furlongs as a 2-year-old and a mile and a quarter at three. Accidental Agent became Group 1 winner number three when he took last year's Queen Anne S. Mums Tipple's dam has a few notable relatives, as she's a half-sister to the Cape Cross colt

Gwaihir, who earned a Timeform rating of 105 during a good juvenile career, and the Mujadil gelding Mombassa, a useful performer at around six furlongs as a 2- and 3-year-old. Mombassa's sister Masai Queen also produced a good 2-year-old winner, with her Choisir colt Chandlery winning the G2 Vintage S. at Goodwood in 2011. This female line has been even more successful in previous generations, as it traces back to Lady Peregrine, dam of the 1928 2,000 Guineas winner Flamingo and second dam of the 1946 Champion S. winner Honeyway. Several of the mares linking Lady Peregrine to

Colomone Cross also made their mark. Mums Tipple's second dam, Twilight Tango, was a sister to the G3 Chester Vase winner Twist And Turn, while his third dam, the useful 2-year-old six-furlong winner Twyla, was a sister to Defecting Dancer, who earned a Timeform rating of 115 in the process of winning the Windsor Castle S. and Sirenia S. The next dam, Nijinsky's daughter Running Ballerina, was a half-sister to several smart middle-distance performers, including the Irish Derby third Sir Penfro.