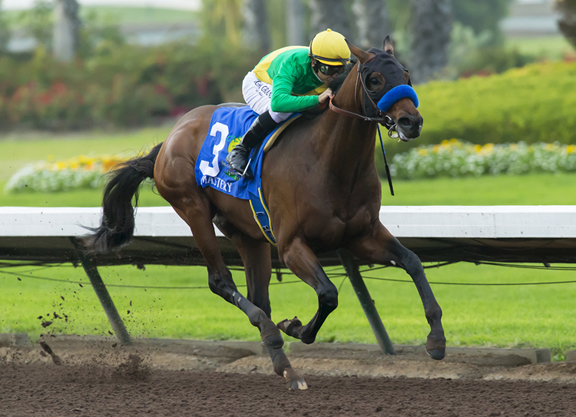 Thanks to alliteration, the words Super Saturday just trip off the tongue and consequently they have been applied to a wide range of events. For Lane's End Farm, though, the latest Super Saturday was just three days ago, when two of the farm's stallions monopolized the Grade I juvenile events at Los Alamitos.

Firstly the GI CashCall Futurity supplied the ever-reliable Candy Ride with his 10th North American Grade I winner, with his unbeaten son Mastery strengthening his claims to being a leading GI Kentucky Derby candidate. An hour later it was the turn of Quality Road, when his daughter Abel Tasman wore down the odds-on American Gal to land the GI Starlet S.

I am going to concentrate here on Mastery, but not before I have seized the opportunity to say how well Quality Road is doing. I rather feared he might struggle initially to reinforce the very bright start he made to his stallion career in 2014, when Hootenanny took the GI Breeders' Cup Juvenile Turf and the unbeaten Blofeld took a pair of Grade IIs. Their efforts earned them 122 and 119 on an Experimental Free Handicap which featured American Pharoah on 126.

The cause of my fears was the fact that Quality Road had not been immune to the fall in demand that young stallions face all too often. From 149 mares in his first year, Quality Road received 91 mares in his second season, and he is credited with only 65 named foals in that second crop. A reduction in his fee from $35,000 to $25,000 helped renew interest in his third year.

I needn't have worried. Quality Road's first crop added another graded winner this year, when Illuminant took the GI Gamely S. and Blofeld has added another Grade II victory to his tally. Even that small second crop has come up with a dual graded winner, in Frank Conversation. The possibility now exists that Quality Road's third crop, which has enjoyed a rush of juvenile winners in recent weeks, is destined to outshine its predecessors. Klimt became its first Grade I winner, in the GI Del Mar Futurity in September, and now Abel Tasman has taken the Starlet. The efforts of Klimt, Abel Tasman and Blofeld will also have forced a change of mind for anyone tempted to pigeon-hole Quality Road as primarily a turf sire.

Candy Ride is also having a very good year–to the extent that he seems likely to achieve his third consecutive top-five finish. This time the basis of his success is an eight-strong team of graded winners, headed by Grade I winners Gun Runner and Mastery. Even so, his fee remains at a very reasonable $60,000

Candy Ride's finest achievement was to sire the champion 2-year-old Shared Belief, who coincidentally gained the first of his five Grade I successes in the CashCall Futurity, in its days at Hollywood Park. It is an enlightening exercise to look at the race's roll of honor over the last 20 years. Victory went to a future winner of a Triple Crown event on three occasions–to Real Quiet in 1997, Point Given in 2000 and Lookin At Lucky in 2009.

It is hard to know exactly what the opposition amounted to at Los Alamitos, but Mastery covered the 1 1/16 miles nearly 7/10ths of a second faster than Abel Tasman. It was also encouraging that this May 3 foal was at his most impressive in the later stages of the race, as he has one of those pedigrees that raises the odd doubt about whether he will be fully effective at a mile and a quarter.

Candy Ride, of course, stayed well enough to set a track record over a mile and a quarter in the GI Pacific Classic, a race which later fell to Shared Belief. However, his admirable son Gun Runner seemed to run out of stamina in the final stages when third to Nyquist in this year's Derby.

Mastery is the second graded winner to emerge from the six foals of racing age sired by Candy Ride from daughters of Old Trieste. His predecessor is the smart turf performer Chocolate Ride, who has gained three of his four graded successes over a mile and an eighth and the other over 1 1/16 miles.

Old Trieste himself challenged for the 1998 Kentucky Derby, on the strength of an impressively fast 10-length victory in a Santa Anita allowance. Although Old Trieste stumbled and pitched on his nose at the start, the son of A.P. Indy was in no mood to hang around and he proceeded to set fractions of :45.75 and 1:10.62. Still third behind Real Quiet and Indian Charlie after a mile, he faded into 10th place.

Old Trieste's subsequent career confirmed that his natural inclination was to run as fast as he could for as long as he could. His Derby failure was followed by four consecutive front-running victories. He took the GIII Affirmed H. by 4 1/2 lengths, the GII Swaps S. by 12 lengths and the GII Del Mar Breeders' Cup H. by five. Even a break of nearly nine months didn't end the sequence and Old Trieste was especially impressive in taking the GII California S. by seven lengths in 1:46.55.

The long absence before the California S. was caused largely by a deep-seated hoof abscess. Sadly, Old Trieste failed to build on this outstanding effort and three defeats followed. He suffered from a quarter crack prior to his final start, in the Breeders' Cup Classic, and finished a tired eighth. Old Trieste died young, leaving fewer than 200 named foals. However, his daughters have produced three other Grade I winners in the fillies: Belle Gallantey, Killer Graces (Hollywood Starlet S.) and Room Service. Encouragingly, both Belle Gallantey and Room Service were Grade I winners over a mile and a quarter, although neither was sired by a noted stayer.

Mastery's dam Steady Course did win a dirt route during a brief second season. Her main claim to fame, prior to Mastery's emergence, was that she shares the same dam, Storm Cat's very useful daughter Steady Cat, as Jump Start. With A.P. Indy as his sire, Jump Start represented the same cross as the GI Met Mile winner Honor Code. Jump Start didn't last long enough to become a Grade I winner, but he showed unusual speed and precocity for a son of A.P. Indy.

Despite always being a big, imposing type, Jump Start was quick enough to win a maiden over 5 1/2 furlongs at Churchill Downs in June and the GII Saratoga Special over an extra furlong in August. Trainer D. Wayne Lukas speculated after the Saratoga Special that the Overbrook homebred “could take us to the Promised Land.” Such dreams took a knock when he could finish only fifth in the GI Hopeful S. and second in the GI Champagne S., and Jump Start then suffered a career-ending injury in the GI Breeders' Cup Juvenile.

Mastery's third dam, Hopespringsforever, was sired by Mr Prospector from Hopespringseternal, which made her a sister to Miswaki. Although he was a Group 1 winner over seven furlongs as a 2-year-old in France, it was mainly as a sprinter that Miswaki plied his trade after his return to his homeland. He proved less one-dimensional as a stallion, famously siring Urban Sea, the G1 Prix de l'Arc de Triomphe winner who became the dam of Galileo and Sea The Stars.