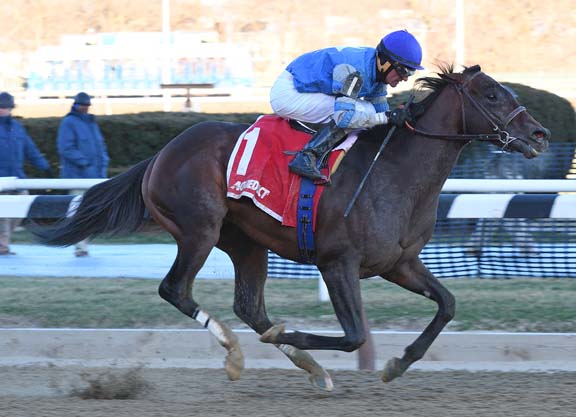 If anyone needed a reminder of the scale of A.P. Indy's legacy, it was vividly provided by last weekend's graded stakes action for 3-year-olds, with this male line providing five of the six winners.

This charge by the A.P. Indy clan was spearheaded by Tapit, a grandson of 1992's Horse of the Year. Of course, Tapit has already overtaken his grandsire's tally of two sires' championships. Taking a fourth consecutive title has been made potentially more difficult by the $7-million first prize landed by Arrogate in the Pegasus World Cup, but Tapit appears to have a powerful squad of 3-year-olds. Thanks to the exciting Unique Bella and the turf specialists Ticonderoga and Dream Dancing, Tapit supplied the winners of the GIII Santa Ysabel S., GIII Palm Beach S. and GIII Herecomesthebride S. This crop also features those GI-winning fillies Pretty City Dancer and Sweet Loretta.

However, when it came to the races carrying Kentucky Derby points, it was the turn of a different branch of the A.P. Indy male line. The first blow was struck by A.P. Indy's son Mineshaft, whose son J Boys Echo proved much too strong in the closing stages for hot favorite El Areeb in the GIII Gotham S. Then Mineshaft's son Dialed In added to his bright start, with his tough and progressive son Gunnevera running out a decisive winner of the GII Fountain of Youth S. Gunnevera now heads the points table with a total of 64, while J Boys Echo has moved past Girvin into second position, with 53. Although there are still many more points to be allocated over the next six weekends, it's possible that the A.P. Indy line will land its third Derby in the space of five years, following Orb in 2013 and California Chrome in 2014.

As I covered Gunnevera's pedigree Nov. 22 following his win in the GIII Delta Downs Jackpot, I will concentrate on J Boys Echo– but not before adding that Dialed In added another first-crop stakes winner when It's Your Nickel won three days ago, taking his total to an encouraging four.

J Boys Echo's sire Mineshaft has always–to me–been a rather puzzling individual, both as a racehorse and a sire. Bearing in mind that his elder sister Tomisue's Delight had raced exclusively on dirt, winning the GI Ruffian H. in 1997 and the GI Personal Ensign H. a year later, it was rather surprising that Mineshaft's connections decided to send him to be trained in England. Perhaps they were influenced by his May 17 birth date, which suggested that he might benefit from a patient approach.

John Gosden didn't ask him to race until he was three, when seven starts on turf yielded just one win, plus a creditable third in a Group 3 in France. By the time he left Gosden to join Neil J. Howard, the son of A.P. Indy had attained a respectable official rating of 106.

As A.P. Indy was never to flourish as a sire of European runners, I was prepared to see Mineshaft show improved form following his return to his homeland, but the scale of his improvement must have surprised even those closest to him.

Within a few months of leaving England, he had won his first three starts on dirt. By the May of his four-year-old season, he had earned a shot at Grade I company and he seized his chance, winning four of his five starts at the highest level, including the Suburban H., the Woodward S. and the Jockey Club Gold Cup. His four Grade I successes all earned Beyer figures of 115 or 118. Although Mineshaft didn't contest the Breeders' Cup Classic, the Horse of the Year title was his.

When Mineshaft retired to Lane's End at the end of 2003, he had plenty to offer in addition to his first-rate record on dirt. His dam Prospectors Delite had once enjoyed a streak of six wins from seven starts, with the GI Ashland S. and GI Acorn S. among her wins. She was one of three Grade I winners produced by Up The Flagpole, herself a winner of the GII Delaware Oaks, so Mineshaft had bloodlines worthy of a Horse of the Year.

There was also the fact that–with A.P. Indy as his sire and a Mr Prospector mare as his dam–Mineshaft was bred to the same pattern as two young stallions which had already shown considerable potential. The dual Grade II-winner Pulpit had caught everybody's eye by siring the high-class juvenile Sky Mesa in his second crop and a very promising colt called Tapit– an impressive winner in 2003 of the GIII Laurel Futurity–in his third. Then there was Malibu Moon, who, despite starting his career at only $3,000, came up with Perfect Moon (119 on the Experimental Free H.) in his first crop in 2003 (and was to be represented by Declan's Moon, the champion two-year-old of 2004, in his second). Since then we have seen Grade I winners by Flatter and Congrats, two other members of the elite A.P. Indy-Mr Prospector club.

Pulpit and Malibu Moon still lead the way in terms of Grade I winners, with Pulpit's score standing at 12 and Malibu Moon's at 11. Mineshaft lags behind, with a total of six, but his sextet aren't just ordinary Grade I winners. Dialed In won the Florida Derby; It's Tricky the Acorn S. and CCA Oaks; Weep No More the Ashland S.; Discreetly Mine the King's Bishop S.; Bond Holder the FrontRunner S.; and Effinex the Clark H.

Mineshaft's career has fluctuated in more ways than one. Having stood his first four seasons at $100,000, his fee for the last nine seasons have been between $20,000 and $35,000. The size of his crops has also ebbed and flowed, once falling as low as 35 named foals in 2010, but that crop was conceived at a time when Mineshaft was still awaiting his first GI winner.

He sired the high-class sophomore fillies It's Tricky and Weep No More from daughters of Tale of the Cat and Storm Cat, and J Boys Echo is also out of a Storm Cat line mare. His dam Letgomyecho is by Storm Cat's grandson Menifee. A winner of the GI Blue Grass S. and GI Haskell Invitational, Menifee is possibly best remembered for running Charismatic to a neck in the 1999 Kentucky Derby. He was also second in the Preakness.

Menifee was sold to Korea as a 10-year-old, having struggled for support. He left behind half a dozen Graded stakes winners– all fillies–one of the best being J Boys Echo's dam Letgomyecho. She won three of her four starts, including the GII Forward Gal S. over seven furlongs early in her 3-year-old season. Second dam Echo Echo Echo is also the second dam of One Lucky Dane, the Lookin At Lucky colt who was second in the GI Santa Anita Derby. The fifth dam of J Boys Echo is Leallah, the champion juvenile filly of 1956 who was a sister to that influential broodmare Lea Lane. This family produced the Preakness and Belmont runner-up A.P. Valentine to A.P. Indy and the smart turf filly Wend to Pulpit.

J Boys Echo's pedigree suggests he has a good chance of staying the Kentucky Derby distance. Hopefully we will have a better idea of whether this progressive colt is good enough when he contests the Blue Grass or the Wood Memorial.