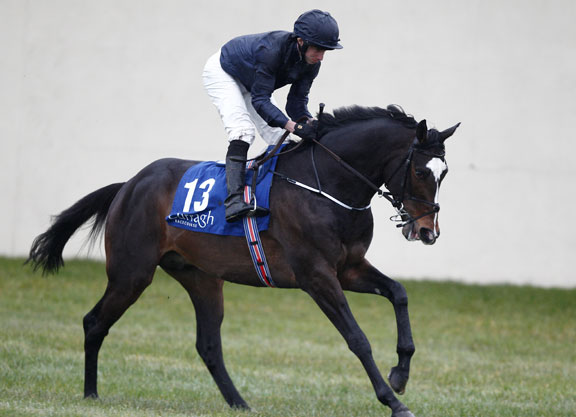 There was a time, before the advent of the GI Breeders' Cup Juvenile, when being named champion 2-year-old virtually brought with it a ticket to GI Kentucky Derby success. Thanks to Riva Ridge, Secretariat, Foolish Pleasure, Seattle Slew, Affirmed and Spectacular Bid, the double was achieved six times in the space of eight years during the 1970s.

Since then, of course, increased specialisation appears to have made it much more difficult for a future Kentucky Derby winner to dominate his generation at two. Perhaps that is starting to change. With Nyquist producing such a thrillingly smooth display at Churchill Downs, he follows Street Sense and American Pharoah as the third Eclipse Award winner in the last 10 years to take the Kentucky Derby, and the fourth to win a Triple Crown event, the other being GI Preakness S. hero Lookin At Lucky.

Logically, it shouldn't be such a giant leap for horsekind for a champion 2-year-old to take the Derby. Graduating to the Derby from the Breeders' Cup Juvenile–the race which usually confers champion status–involves a step up of only 330 yards.

Its margin is much, much bigger in Europe, where the champion 2-year-old usually wins either the G1 Dewhurst S. over seven furlongs or the G1 Racing Post Trophy over a mile. Stepping up to a mile and a half at Epsom therefore constitutes more than a giant leap, and helps explain why only three top-ranked juvenile colts (Camelot, New Approach and Reference Point) have gone on to win the G1 Investec Derby in more than 40 years.

The last six winners of the Derby had very mixed records as 2-year-olds, ranging from very little experience to championship-winning form. Workforce and Golden Horn had each won a maiden race on their only start, whereas Pour Moi had taken a conditions race on the second of his two starts. Ruler of the World hadn't even raced at two. The two exceptions were Camelot and Australia, a pair of group winners sired by Montjeu and Galileo–the biggest influences on the Derby in recent years.

There was always a good chance that this year's Derby renewal would again rely heavily on colts which were largely unexposed in 2015, as the highest-ranked colts on the 2-Year-Old Classification featured sons of War Front, Invincible Spirit, Exceed And Excel, Dream Ahead, Dark Angel and Iffraaj.

The unexposed nature of many of the leading Derby contenders means that the betting is currently headed by Galileo's Classic-winning daughter Minding (though I can't help thinking that the ever-shrewd Coolmore team would much prefer to win the race with one of their blueblooded colts, thereby turning him into a very valuable stallion prospect).

There is certainly no shortage of very likeable Derby contenders with bloodlines worthy of a Derby winner.

Midterm, a lazy colt who is unbeaten in two starts, has the potential to be anything. Like Minding, he is by Galileo, who has already hit the target three times on Derby Day, with New Approach, Ruler of the World and Australia. Midterm is the first foal of that admirable mare Midday, who was beaten only a head in the G1 Investec Oaks, a race once won by her dam's half-sister Reams of Verse.

Midday went on to win six Group 1s, gaining three of her wins in the G1 Nassau S. over a mile and a quarter, the others in the GI Breeders' Cup Filly & Mare Turf, G1 Yorkshire Oaks and G1 Prix Vermeille. Her annual Timeform rating went from 98 at two, to 122 at three and 126 at four, so there is good reason to expect Midterm to continue improving.

A colt with a similar background is US Army Ranger, as he too is by Galileo and he is also out of mare who finished second in the Oaks. However this mare–Dalakhani's daughter Moonstone –went on to win the G1 Irish Oaks, gaining the only victory of her career. There is no shortage of stamina in US Army Ranger's pedigree, as his dam was tried over 1 15/16 miles and Moonstone's close relative Cerulean Sky produced Honolulu, winner of the G2 Doncaster Cup over two and a quarter miles, as well as the Queen Alexandra S. over even further.

Many considered US Army Ranger a little fortunate to beat his stablemate Port Douglas in last week's G3 Chester Vase, and he was in receipt of four pounds from the short-head runner-up. He clearly needs to continue improving if he is to win the Derby, but he has raced only twice and is the type who would benefit from a very strongly-run race–something the O'Brien/Coolmore camp would be able to ensure, if–as usual–they go to Epsom mob-handed.

Last Sunday's Classic trials in Ireland and France fell to a pair of very well-connected Godolphin colts, either one of which could carry the Godolphin colours to their first Derby success.

Jim Bolger is confident that the homebred Moonlight Magic has what it takes to win the Derby, and this winner of the

Moonlight Magic is a son of Cape Cross, who has etched his name firmly onto the Derby roll of honor in recent years, principally as the sire of 2009's superlative winner Sea The Stars and of last year's stylish winner Golden Horn. Cape Cross is also the broodmare sire of Australia, winner of the 2014 edition.

The Bolger colt also has a Derby winner–Lammtarra–as his broodmare sire. For a horse who won the Derby, G1 King George VI and Queen Elizabeth Diamond S. and the G1 Prix de l'Arc de Triomphe, Lammtarra had a lamentable record as a stallion, arguably his best representative being Moonlight Magic's dam Melikah. This fine broodmare–already dam of an Arc third–followed up her third in the Oaks with second place in the Irish version. There's a strong chance she owed her talent more to her exceptional dam Urban Sea–the Arc winner responsible for those first-rate Derby winners Galileo and Sea The Stars (as well as the Oaks second All Too Beautiful, herself dam of an Oaks runner-up in Wonder of Wonders).

Mention of Sea The Stars brings us neatly to Godolphin's other trial winner, Cloth of Stars, a 400,000gns yearling who would need supplementing for the Derby. His victory in the G3 Prix Greffulhe was his third at group level, and he is one of the few possible Derby contenders to have won a group race at two.

Cloth of Stars belongs to only the third crop by Sea The Stars, but the Gilltown resident has already sired an Oaks winner in Taghrooda, a Derby third in Storm The Stars and a runaway G1 German Derby winner in Sea The Moon. It is relevant that Sea The Stars's Timeform rating soared from 109p as a 2-year-old, when he was a Group 2 winner, to 140 at three. Cloth of Stars also appears progressive.

He is yet another from a family with proven Classic credentials. His dam, the Kingmambo mare Strawberry Fledge, is a sister to the Oaks winner Light Shift, as well as being a half-sister to a top older mare in Shiva (G1 Tattersalls Gold Cup). His third dam is Northern Trick, a wiry Northern Dancer filly who won the G1 Prix de Diane and was twice runner-up in the Arc.

Cloth of Stars' second dam, Lingerie, was by Shirley Heights, who played his part in the Mill Reef line's domination of the Derby in the later decades of last century. Mill Reef set the ball rolling in 1971 and was followed by his sons Shirley Heights and Reference Point, grandson Slip Anchor, great-grandson High-Rise and great-great-grandson Sir Percy.

It will be interesting to see whether The Gurkha develops into another Derby contender for Coolmore and Aidan O'Brien. Like Minding, he is by Galileo out of a talented miler sired by Danehill Dancer. Whereas Minding is out of Lillie Langtry, a Group 1 winner, The Gurkha is out of Chintz, a seven-furlong Group 3 winner as a 2-year-old. Both have a second dam sired by a winner over a mile and a half, Minding's being by Darshaan and The Gurkha's by Slew O' Gold.

The Gurkha has run only twice, both times over a mile and both times on heavy ground. He was impressive in winning by nine lengths at Navan in April and the runner-up, Saafarr, was beaten only 2 1/2 lengths by Moonlight Magic two days ago.

The flourishing Galileo-Danehill Dancer cross has already produced a group winner over a mile and a half in Quest For Peace, so it is possible that The Gurkha will also stay that far, though his stamina can't be taken for granted.

The weekend's other Derby Trial, at Lingfield, went to Humphrey Bogart, another who would need supplementing for the Derby. As a son of the G1 Prix Morny winner Tagula, this colt doesn't have much stamina on his sire's side, but take a look at the bottom half of his pedigree. With Kahyasi as her sire and Darshaan as her broodmare sire, his dam Hazarama is bred to the same pattern as Enzeli (winner of the G3 Doncaster Cup and the G1 Gold Cup at Royal Ascot), Zainta (Prix de Diane) and Shamadara (a short-head second in the Irish Oaks). Add in the fact that Humphrey Bogart's third dam Hazy Idea was a smart winner at up to 1 3/4 miles and it is easy to see why the colt stays as well as he does. It would take a lot of money–and a lot of courage–to supplement him, but this tough and experienced colt probably wouldn't be disgraced.

The same family is also responsible for the Aga Khan's Sea The Stars colt Harzand, who shares the same second dam, Hazaradjat, as Humphrey Bogart. Harzand has won his last two starts, including the G3 Ballysax S. over a mile and a quarter by just over a length from 'TDN Rising Star' Idaho. Idaho was beaten only a little further by Moonlight Magic two days ago. Harzand appears to be a very smart colt in the making but his highly experienced rider expressed concerns that the colt is too big and heavy to act around Epsom.

No doubt other contenders will emerge over the next week or so. Galileo's squad also includes the Group 3 winner Deauville, whose smart brother The Corsican just about stays a mile and a half; the aforementioned Idaho, a very useful brother to the dual Group 1 winner Highland Reel; and perhaps we shouldn't underestimate Port Douglas, a tough Group 2 winner bred to the same cross as Ruler of the World. Then there's Galileo's grandson Massaat, This G1 2000 Guineas runner-up will have inherited some stamina from his sire Teofilo, but he is out of a sprinting daughter of Acclamation. He may therefore struggle to match the stamina of several of the Classically-bred bluebloods mentioned above.