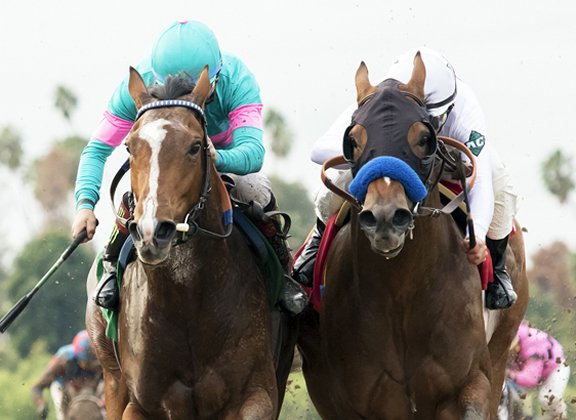 It's a long uphill climb from the GIII Sham S. in January to Grade I success at the Breeders' Cup. Even so, the journey hasn't proved too perilous for some of the horses which have performed well in the Sham since it was brought forward to January in 2011. Two of the winners, Tapizar and Goldencents, jointly collected three editions of the GI Breeders' Cup Dirt Mile, while Secret Circle, a half-length second in 2012, went on to victory in the following year's GI Breeders' Cup Sprint.

The portents are therefore good for Gormley (Malibu Moon) and American Anthem (Bodemeister), the pair who fought out such a prolonged battle in the latest edition. It is going to be fascinating to see which of these talented colts has the brighter future. No doubt many would opt for American Anthem, the highly regarded Bodemeister colt who was beaten just a head on only his second appearance. Don't forget, though, that Gormley was carrying five pounds more than his nearest rival, having become the first horse to defeat the Grade I-winning 'TDN Rising Star' Klimt (Quality Road) when the pair met in the GI FrontRunner S. in October. In view of the ease of Gormley's FrontRunner success, it was disappointing to see his lackluster effort in the Breeders' Cup Juvenile, but perhaps we should forget about that, following his solid display Saturday.

Gormley, the name, may sound uncomfortably close to gormless, a British word meaning stupid, but it also conjures up some of the magical works of the colt's namesake, Sir Antony Gormley. Although arguably best known for his Angel of the North and the hundred life-size figures which comprise his “Another Place” feature on Crosby Beach near Liverpool, I personally enjoyed Sound II, an enigmatic life-size figure in the ancient crypt of Winchester Cathedral (click here).

The equine Gormley RNA'd at $150,000 as a yearling, presumably because of a perceived flaw in the colt's breathing. Clearly, with three wins from four starts, that flaw has proved no hindrance. Other Malibu Moon yearling colts sold for up to $800,000 in 2015, with 25 of them achieving an average of nearly $210,000, off a fee of $70,000. The colts' average was virtually identical to that of the fillies' and Malibu Moon's lifetime figures show his yearling colts have a higher median and a slightly higher average than his daughters.

This always surprises me in view of the imbalance between the sexes among Malibu Moon's graded stakes winners. Gormley is only the third male Grade I winner, following Declan's Moon and Orb, among the Spendthrift stallion's 11 Grade I winners. With the 16 Grade II winners, the split is six males and 10 females, while the 11 Grade III winners comprise four males and seven females. Altogether that's 25 fillies, compared to 13 colts and geldings, among Malibu Moon's 38 Graded winners.

One interesting aspect of Gormley's emergence is that he is the 15th of Malibu Moon's graded winners to have a second line of Mr. Prospector within five generations. Perhaps more significantly, he is the eighth individual with two lines of Mr. Prospector among Malibu Moon's 13 male graded winners. Seven of the eight are inbred within four generations, with Declan's Moon, Orb, Gormley, Stanford and Freedom Child all inbred 3×4, while Noble Moon and Odysseus are inbred 3×3. All three of Malibu Moon's male Grade I winners are inbred 3×4.

It was also in Gormley's favor that he is out of a granddaughter of Storm Cat, by Bernstein. Malibu Moon's results with mares by sons of Storm Cat include 8% stakes winners, which is slightly better than the stallion's overall figure of 7%. In fact, this cross has produced six graded stakes winners from 118 foals, including Gormley's fellow Grade I winner Eden's Moon, the Grade II winners Corfu and Onlyforyou and the Grade III scorers Donegal Moon and Luna Time.

Gormley is the first foal of Race To Urga, who also has a 2-year-old colt by Smart Strike and a 2016 colt by Gio Ponti, who sold for $100,000 as a weanling. The daughter of Bernstein won the Wait A While S. over 1 1/16 miles on turf as a 4-year-old. Altogether Race To Urga won five of her eight starts.

Bernstein was only 14 when he died in 2011, just a few months after two of his best representatives–the GI Breeders' Cup Mile winners Karakontie (Jpn) and Tepin–were born. Race To Urga is bred to the same pattern as Miss World, another of Bernstein's Grade I winners, as both were produced by daughters of Kingmambo. Race To Urga was the first foal of Miss Mambo, a smart performer at around a mile in Europe. Third in the G1 French 1,000 Guineas, after winning three of her first four starts, she later won a Listed race in Ireland.

Gormley's fourth dam, Estrapade, was one of several star daughters of Vaguely Noble bred by Nelson Bunker Hunt. You can get a good idea of her talent from the fact that Allen Paulson had to pay $4,500,000 for her as a 5-year-old in 1985. Paulson was rewarded with some fine efforts by the 6-year-old Estrapade, including victories in the GI Arlington Million and GI Oak Tree Invitational and third place behind Manila and Theatrical in the GI Breeders' Cup Turf. However, this half-sister to Horse of the Year Criminal Type proved less effective for Paulson as a broodmare, producing just one black-type performer in Rice (Blushing John).

Gormley's third dam Troika, a four-time winner on turf, was the product of two parents (Strawberry Road {Aus} and Estrapade) which were Grade I winners at up to a mile and a half on turf. However, the colt's first two dams are by Bernstein, who won at up to seven furlongs; and Kingmambo, a miler, so it is easy to see where his pace comes from. It is in Gormley's favor that Malibu Moon has already sired a Kentucky Derby winner in Orb, but Orb's first two dams were daughters of Unbridled and Cox's Ridge. I would want to see more of Gormley before predicting whether or not he has enough stamina to follow in Orb's footsteps to Churchill Downs.