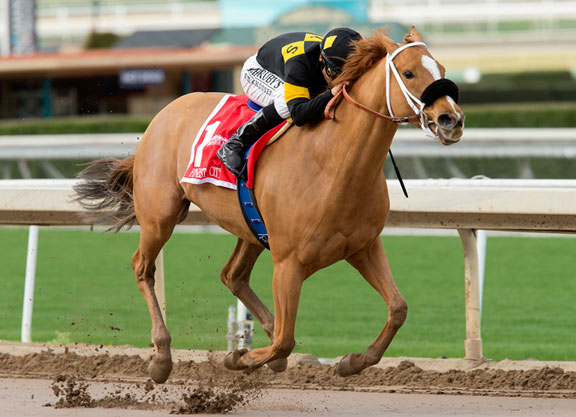 While I’m not sure I totally subscribe to the theory that the market never lies, it is always illuminating to chart the changes in the fees charged for the higher-priced stallions. Among the many changes made between the 2016 and ’17 seasons, the reductions included such notable sires as Pioneerof the Nile, Empire Maker, Distorted Humor, Giant’s Causeway and Malibu Moon, with advancing years being a contributing factor to some of these.

While the fees for Ghostzapper and City Zip haven’t risen nearly as sharply, these Grade I-winning sons of Broodmare of the Year Baby Zip both have records to be proud of.

Ghostzapper, of course, paid the penalty for having been over-priced at the start of his career. At a time when it cost $300,000 to use proven sires of the calibre of A.P. Indy, Giant’s Causeway and Kingmambo, Ghostzapper started out at $200,000–a fee which put him above Distorted Humor, Unbridled’s Song, Awesome Again, El Prado, Gone West, Seeking the Gold and Dynaformer. That’s some competition for an unproven sire, and in next to no time Ghostzapper was plying his trade at fees of $30,000 and then $20,000.

To his credit, the Adena Springs stallion quickly proved to be a very reliable source of graded winners, siring 17 in his first three crops, including five Grade I winners in a single crop. Needless to say, his much cheaper crops have generally failed to match those types of figures, but Ghostzapper has done well enough to set his fee climbing steadily again, from $20,000 in 2012 to $75,000 this year. His unbeaten son McCraken–number two on last week’s first TDN Kentucky Derby 12–was sired at $40,000 and his current 2-year-olds are off a $50,000 fee, with two $60,000 crops to follow.

Ghostzapper’s older half-brother City Zip has never enjoyed the silver spoon treatment and the increase in his fee to a career-high $50,000 this year reflects the fact that his Average Earnings Index stands at 1.71, while his mares’ Comparable Index is only 1.44. After beginning his stallion career with three seasons at $7,500 in New York, he moved to Lane’s End, starting in 2005.

One important fact which mustn’t be overlooked is that none of City’s Zip’s racing age progeny was sired at a fee higher than $25,000–and that includes his 2017 2-year-olds. There is therefore good reason for having high expectations of his 2016 and ’17 crops, both sired at $40,000.

After all, this 19-year-old son of Carson City has managed to sire three Eclipse Award winners. Work All Week and Dayatthespa set the ball rolling by landing the 2014 titles of Male Sprinter and Female Turf Horse. And now Finest City has become his third Eclipse Award winner, having dominated the 2016 Female Sprinter category. These three all won at the Breeders’ Cup, and City Zip has a fourth Breeders’ Cup winner to his credit, with Catch A Glimpse taking the 2015 Juvenile Fillies Turf. For the record, Dayatthespa, Work All Week and Finest City were all sired at fees of $15,000, while Catch a Glimpse is the result of a $20,000 season. City Zip has also enjoyed Grade I success with Palace (Forego S. and Alfred G. Vanderbilt H.), Bustin Stones (Carter H.) and Personal Diary (Del Mar Oaks), with Bustin Stones now doing increasingly well as a stallion in New York.

The exploits of Finest City, Work All Week, Palace and Bustin Stones are proof that City Zip can sire top winners on the main track, but he is admirably versatile. With Catch A Glimpse, Dayatthespa and Personal Diary all enjoying Grade I success on turf, City Zip has become a regular among North America’s top 10 turf sires, finishing 2016 as the fourth highest North American-based turf sire, behind Kitten’s Joy, War Front and Scat Daddy.

Finest City, of course, pulled off another important win, this time under top weight in the GII Santa Monica S. over seven furlongs, on the very day that she was named champion female sprinter. Although this versatile mare has performed respectably on turf–she was beaten only a head in the GII John C. Mabee S. over a mile and an eighth last September–she has done all her winning on dirt.

It is hardly surprising, in view of her heritage, that she handles both surfaces. Her dam Be Envied made only one of her 17 starts on dirt, winning on turf and all-weather. Be Envied’s durable half-brother Burning Roma was versatile enough to earn nearly $240,000 on turf, even though this son of Rubiano also garnered over $1.1 million on dirt, notably winning the GI Futurity S.

Finest City’s third dam Fiddlesticks was by Northern Dancer. Fiddlesticks never ran but she was an extremely well-connected mare and her bloodlines helped her produce Vivano, a smart filly who twice finished second at Grade I level on dirt. The next dam is Princequillo’s daughter Discipline, a high-class performer who produced Squander, one of the best American juvenile fillies of 1976. Squander in turn became the second dam of that outstanding filly Goodbye Halo.

Discipline was also a half-sister to the smart American juvenile In Hot Pursuit (dam of the top English miler Posse), Uncommitted (dam of the GI winner Wavering Monarch and third dam of Derby winner Motivator) and Bold Example (second dam of the top European milers Zilzal and Polish Precedent). Current stallions from this female line include Trappe Shot and Power Broker.

Even though Finest City’s dam sold for only $37,000 while carrying this champion, Be Envied represents a formidable female line and she also has the attraction of being a daughter of Lemon Drop Kid. With his eldest daughters 14-year-olds in 2016, the champion older male of 2000 is still short of full production as a broodmare sire (his daughters had 243 runners last year, when older rivals had contingents numbering in the five, six and seven hundreds).

Lemon Drop Kid is now the broodmare sire of eight Grade I winners, with Finest City, Yellow Agate, Divisidero, Tamarkuz and Forever Unbridled all scoring at the top level last year. It looks a pretty safe bet that this grandson of that remarkable mare Lassie Dear is destined to shine increasingly brightly in the role of broodmare sire.