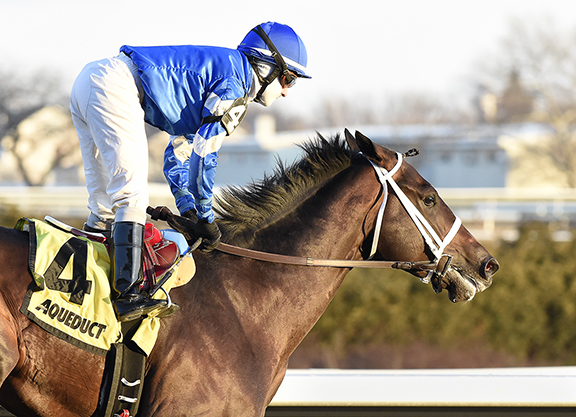 Although the 20-year-old Speightstown got into the act, thanks to Strike Power in the GIII Swale S., it was largely the younger division of Kentucky stallions which dominated last weekend's graded stakes action for 3-year-olds.

Uncle Mo has been having such a sensational run over the last few years that it is easy to forget that he is still only 10 years old. He owes his three graded successes of 2018 to his daughters, the most exciting being Dream Tree, a Grade I winner who kept her unbeaten record intact in the GII Las Virgenes S.

Two other in-form stallions, Into Mischief and Street Sense, were represented by Audible, an impressive winner of the GII Holy Bull S., and Avery Island, a progressive winner of the GIII Withers S. While neither of these two strictly qualifies as young, the 13-year-old Into Mischief is arguably entering the most exciting phase of his career. He sired his current 2-, 3- and 4-year-olds at the higher fees he earned with his bright start in 2012.

Although Street Sense is a year older, the best years could still be ahead of him, as he is no longer in competition with his sire, the highly accomplished Street Cry (Ire) who died in September 2014. Not that Street Sense's crop conceived in 2014 is doing badly. The opposite is true, as it includes not only Avery Island but also McKinzie (and he also sired the dams of Speed Franco, the GIII LeComte S. runner-up Principe Guilherme (Tapit) and the European classic contender Roaring Lion (Kitten's Joy), so he is making a fast start as a broodmare sire).

Of the potential Triple Crown horses among these winners, Avery Island appeals as the one least likely to have stamina problems. The basic facts are that he is by a horse who demonstrated his appreciation of a mile and a quarter with his victories in the GI Kentucky Derby and the GI Travers S. Avery Island also has a dam by the GI Belmont S. and GI Breeders' Cup Classic winner A.P. Indy and his second dam, Isola Piu Bella, was a triple Grade I winner at up to 1 3/8 miles in her native Chile. Isola Piu Bella then became a dual Grade III winner over 1 1/8 miles in the U.S.

Another encouraging aspect of Avery Island's background is that this Godolphin homebred was following in the footsteps of some other Godolphin/Darley color-bearers when he won the Withers. Back in 2006 (when the Withers was contested at the end of April), the winner was Bernardini, who went on to win the GI Preakness S. and Travers.

The Withers has been in its new calendar position of late-January/early February only since 2012, when it was the turn of Bernardini's son Alpha, who also went on to win the Travers. The 2014 Withers winner Samraat (Noble Causeway) took fifth place in the Kentucky Derby, while Revolutionary (War Pass), winner of the 2013 Withers, finished third. Avery Island therefore has plenty to live up to.

Although his dam Kinda Spicy managed only two starts, she won both of these dirt routes. As I mentioned earlier, she is a daughter of A.P. Indy, who is also the broodmare sire of Kentucky Derby hopeful Bolt d'Oro (as well as the dams of 2010 Kentucky Derby winner Super Saver and the 2017 Preakness winner Cloud Computing).

Although Avery Island's second dam Isola Piu Bella was bred in Chile, both her sire–Rich Man's Gold–and broodmare sire–Inchwood–were bred in the U.S. If Rich Man's Gold's name rings a bell it is probably because one of his champion Chilean sons, Lido Palace, was transferred to the U.S., via Dubai, with great success.

A champion at two, Lido Palace became Chile's Horse of the Year as a 3-year-old, when he won the equivalents of the 2,000 Guineas and St Leger. He was seen to even better effect in the U.S., clocking up Grade I victories in the Whitney H. and two editions of the Woodward S. He stayed pretty well but his high-class son Vineyard Haven gained his Grade I successes over six, seven and eight furlongs.

Rich Man's Gold was only a minor winner, his best effort being his second to Mystery Storm in the GIII Rebel S. in 1995. It was in his favour, though, that he was by Forty Niner, a noted sire of sires.

Inchwood, the sire of Avery Island's third dam, was also by a noted sire of sires in In Reality. Inchwood's racing record amounted to two starts, in which he finished fifth and seventh, so you might ask why he was given his chance as a stallion. The answer is that this $475,000 yearling was a half-brother to Bold Reasoning, the 1971 Withers S. and Jersey Derby winner who was to find fame as the sire of the great Seattle Slew. With Avery Island's dam Kinda Spicy having a son of Seattle Slew as her sire, Kinda Spicy is inbred 4 x 4 to Hail To Reason's daughter Reason To Earn.