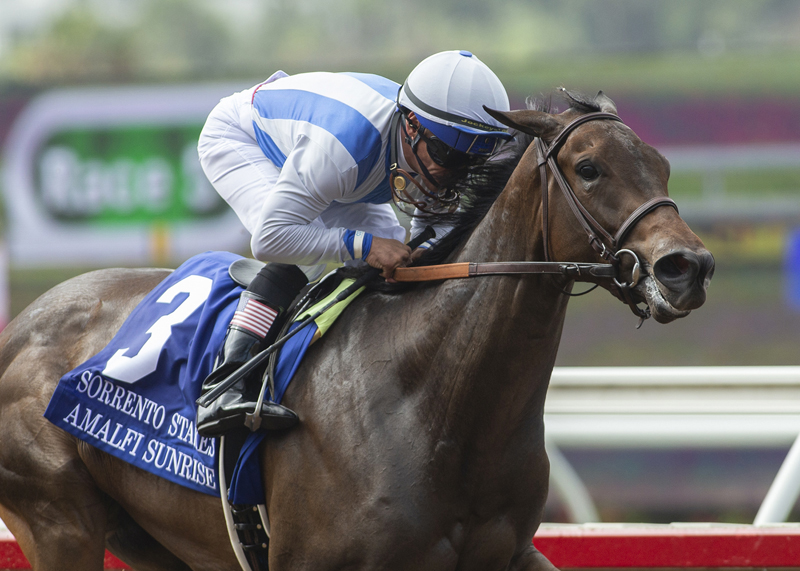 As the TDN Rising Star Amalfi Sunrise drew off for an easy six-length success in the GII Sorrento S., I was reminded of a commission I received in the fall of 2015. With the Breeders' Cup bandwagon due to roll into Lexington and Keeneland, WinStar wanted to promote its extensive team of stallions. I was asked to write 250-word summaries for each of them, including three which were scheduled to be added to the roster in 2016.

Here's how I assessed Constitution:

“If Constitution can follow in the footsteps of his sire Tapit and broodmare sire Distorted Humor, he will represent a gilt-edged investment in his early years at WinStar. After all, Tapit was available for only $12,500 in his third and fourth years, but the tremendous success of his early crops fueled a rise to 10 times that amount by his eighth season. By 2015 his fee was $300,000. It is a measure of Tapit's talent that those two seasons spent at $12,500 produced a total of six Grade I winners, including a champion 2-year-old in Hansen.

“Distorted Humor's story has been very similar. Although his fee in his fourth season fell to $10,000, he too did so well that his fee stood at $150,000 by his eighth season, before rising to $300,000. His first four years, all spent at $12,500 or less, yielded six Grade I winners, including the GI Kentucky Derby and GI Preakness hero Funny Cide and the GI Travers S. winner Flower Alley.

“Constitution was arguably more accomplished than either of these excellent stallions. Having defeated future GI Belmont S. winner Tonalist on his second start, Constitution took his record to a perfect three-for-three with his victory in the GI Florida Derby. Unfortunately, a shin fracture ruled him out of the Triple Crown events, but Constitution later gave another demonstration of his class in winning the GI Donn H.

“Constitution's dam, the group-placed 2-year-old Baffled, is closely related to Awesome Humor, one of the best juvenile fillies of 2002, when she won the GI Spinaway S.”

That concluding sentence needs a bit of updating, as the quick-maturing Baffled now has three graded/group winners to her credit, the other two being the English-raced Group 2 juvenile winner Boynton and the Grade III-winning Jacaranda, who defeated Paulassilverlining to take the 2014 Tempted S.

Of course, books of over 100 mares in those first three years will, with a bit of luck, still give him enough ammunition to avoid the types of peaks and troughs which can result from pronounced fluctuations in crop size.

Although it's still too early to be drawing many firm conclusions about a young stallion, the comparison of Constitution to Tapit and Distorted Humor is looking far from fanciful. He is making a dream start, with Amalfi Sunrise's Grade II success coming only three weeks after Constitution's son By Your Side had maintained his unbeaten record in the GIII Sanford S. over six furlongs. He is therefore one black-type winner, and some $90,000, ahead of the similarly promising American Pharoah on the freshman sires' table, which augurs well for a fascinating summer and fall.

If Amalfi Sunrise fulfils the promise of her first two victories, Constitution should become the third son of Tapit to sire a Grade I winner, following Concord Point and Tapizar, who were respectively responsible for those fine fillies American Gal (GI Test S. and GI Humana Distaff H.) and Monomoy Girl (whose terrific run of important successes culminated in the GI Breeders' Cup Distaff).

Although confident of Constitution's potential, I am a little surprised that he is making his mark so quickly, as he didn't race at two. I think his dam Baffled can take some of the credit, as she gained her first success in the May of her juvenile season and then improved on that effort when third of 20 in the G3 Albany S. at Royal Ascot the following month.

As I mentioned earlier, she has also produced two other smart performers which were successful at group/graded level as 2-year-olds. And don't forget her close relationship to Awesome Humor, whose unbeaten juvenile campaign featured victories in the GIII Debutante S., GII Adirondack S. and GI Spinaway S., all before the end of August. Awesome Humor and Baffled share the same sire, Distorted Humor, and Baffled's second dam Horns Gray was the dam of Awesome Humor.

There is also plenty of evidence in the bottom half of Amalfi Sunrise's pedigree to suggest that she should continue to thrive as she matures. Her broodmare sire, the Belmont S. winner and Kentucky Derby runner-up Empire Maker, was much more of a classic type than a noted 2-year-old. I think the same could be said of his stallion career, though he did enjoy Grade I 2-year-old success with Pioneerof The Nile, Country Star and Grace Hall (there may well be another in the shape of his spectacular son Eight Rings, who earned TDN Rising Star status last Sunday).

Of the previous 14 graded/group winners out of Empire Maker's daughters, only one has scored at that level as a 2-year-old, that being the GI Frizette S. winner Separationofpowers.

Amalfi Sunrise's second dam, the Phone Trick mare Bella Chiarra, didn't race at two and didn't reach her peak until she was five, when she landed the GII Rampart H. over 1 1/16 miles. Bella Chiarra's half-brother David Copperfield did win at two, on his only appearance, but made his name as a smart turf over the next three seasons.

The other noteworthy aspect of Amalfi Sunrise's pedigree is that she is inbred 4X3 to Unbridled. Others with two lines to the 1990 Kentucky Derby and Breeders' Cup Classic winner include Unique Bella (3X3), Sweet Loretta (3X3), Tacitus (3X4) and West Coast Belle (3X3). All of these four Grade I or Grade II winners were sired by Constitution's sire Tapit.