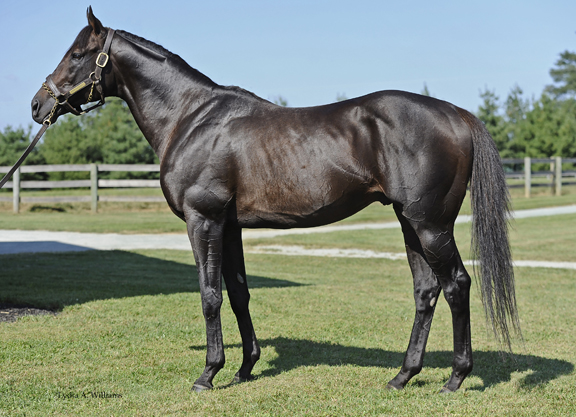 The sale-topping weanlings were bred by Steve Young’s A1A Racing, which owns Peace and Justice, and were consigned by Northview Stallion Station. Peace and Justice was relocated to Northview’s Peach Bottom, Pennsylvania division for the 2018 breeding season after standing his first season at another Keystone State nursery.

“We knew that both of those colts would sell well, but we didn’t have any idea that they would sell that well,” said David Wade, Northview’s General Manager and Director of Sales. “We were pleasantly surprised. They were both nicely conformed, free-walking colts–very athletic-looking. Obviously, they caught the eye of a couple prominent buyers.”

David Ingordo purchased three-time-winning miler Peace and Justice himself as a $425,000 yearling. Hip 141 is out of a Discreet Cat half-sister to GSW Azar (Scat Daddy) and from the family of MGSW Woodlander and speedy MGSW and ‘TDN Rising Star’ Coal Front.

Hip 145 hails from the extended female family of European Horse of the Year and sire Peintre Celebre.

“If they were by War Front themselves they would’ve brought a lot of money,” said Northview Bloodstock Manager Paul O’Loughlin, who noted that Peace and Justice’s progeny look very much what you’d expect of descendants of their powerhouse grandsire.

O’Loughlin said Peace and Justice was bred to almost triple as many mares in 2018 as he was in 2017 and that he has remained popular among Pennsylvania breeders.

“He bred nearly 80 mares his second year [in 2018], and hopefully his representation today [continues to attract breeders],” he said. “There are people inquiring about him already, which is a big thing in the Mid-Atlantic region in November and December–people calling up about stallions, which is great.”

The sale’s top racing prospect was 2-year-old gelding Halstaat (Munnings), who had finished sixth in his Aqueduct maiden special weight unveiling Nov. 2 and improved one spot when in for a $50,000 tag last Friday. Consigned by Marshall W. Silverman as hip 269, he was purchased by trainer Carlos Martin for $50,000.

Eight-year-old Line of Best Fit (Trajectory) (hip 60), a stakes-winning, Grade I-placed earned of nearly $660,000, was the top broodmare prospect thanks to a $33,000 winning bid from Joseph Besecker. She was part of the Bill Reightler draft.

A South Carolina-bred daughter of Cross Traffic (hip 211) consigned by Gracie Bloodstock and purchased by Al Klerlein III was the highest-priced yearling at $30,000.