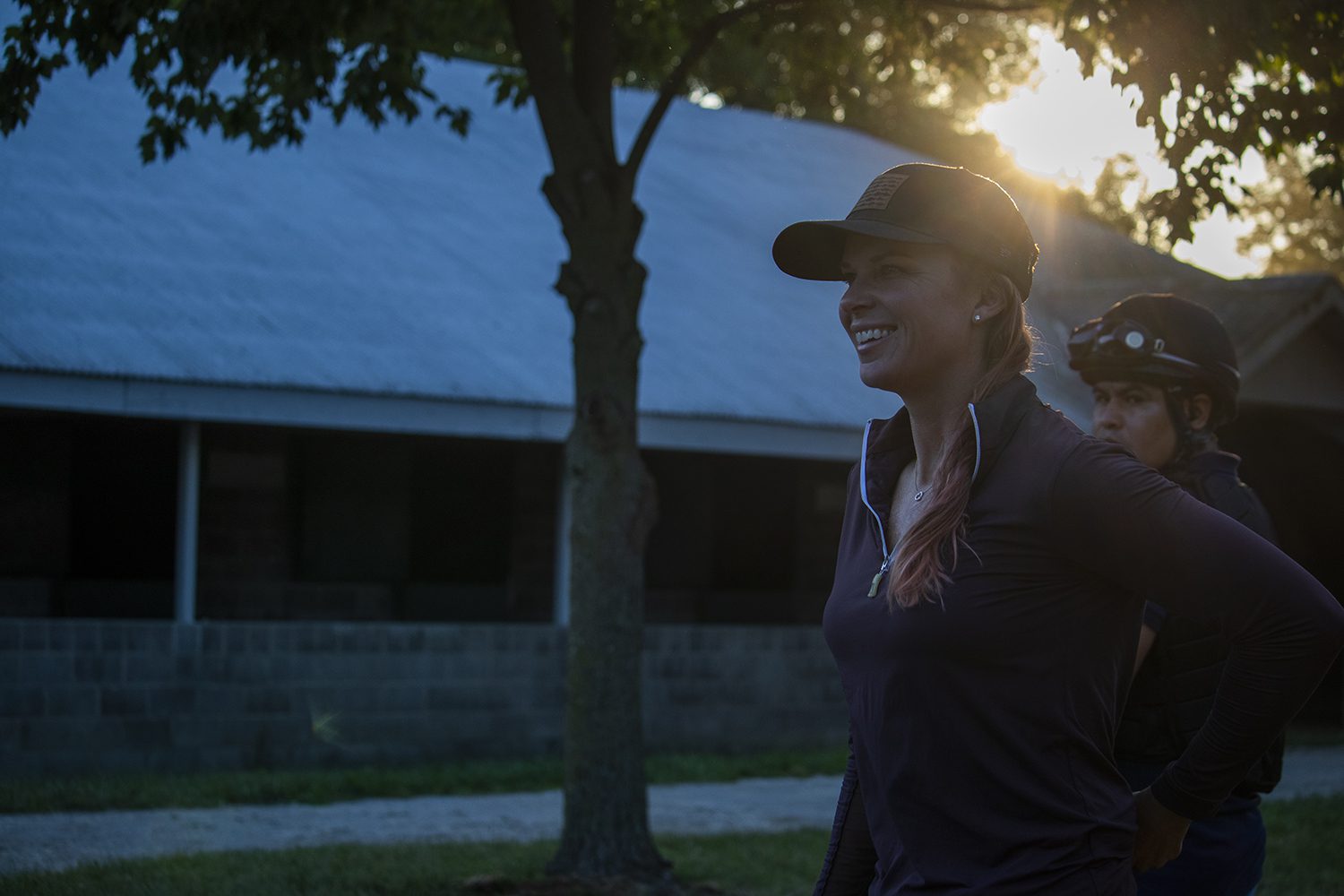 Impressive GIII Sanford S. victor Mo Strike was the first Brad Cox-trained 2-year-old to make it to the winner's circle at Saratoga this year, but the son of Uncle Mo probably won't be the last. At last year's meet, Cox saddled five juveniles winners at the Spa, including the future multiple stakes-winning filly Bubble Rock (More Than Ready).

In recent years, the Cox barn's arsenal of talented 2-year-olds has rapidly developed in terms of both quality and quantity. While many of the stable's runners have reached future success alongside their back-to-back Eclipse Award-winning trainer, nearly all of them received their early schooling at Keeneland under Cox's assistant trainer Tessa Bisha.

Mo Strike was one of the first juveniles to arrive at the Brad Cox barn at Keeneland this spring, putting in three recorded works in May. When the colt showed early talent, he was among the first group that Bisha sent on to Churchill Downs. A few weeks later, he broke his maiden there on debut and is now pointing toward the GI Hopeful S.

Bisha is passionate about training 2-year-olds. While she enjoys overseeing the older horses, she said that they usually have a good handle on their job already. With 2-year-olds, however, she has the opportunity to teach them and get their racing career off on the right foot.

“I'd say judging the two-year-olds is the biggest part of my job–making sure that they get on the right pathway for success for whatever life has in store for them as far as racing goes and I feel like beyond that as well,” Bisha said. “What I look for is I want them to be comfortable with what we're asking them to do. They need to come in with an open mind and a good attitude, and we try to help them get there if they're not when they come in. We go back to the gate early and often and we make it a laid-back and calming experience. We really focus on making everything a good experience for them.”

Every year after the Keeneland Spring Meet has wrapped up, Bisha's incoming class of 2-year-olds starts to arrive. During her busiest months of May and June, she will have up to 85 juveniles under her care. The most precocious among the group will head to the Churchill Downs race meet and later, other promising youngsters will ship to Saratoga. When training at Keeneland concludes for the summer, the remaining pupils will stay under Bisha's care either at Ellis Park or Turfway Park. 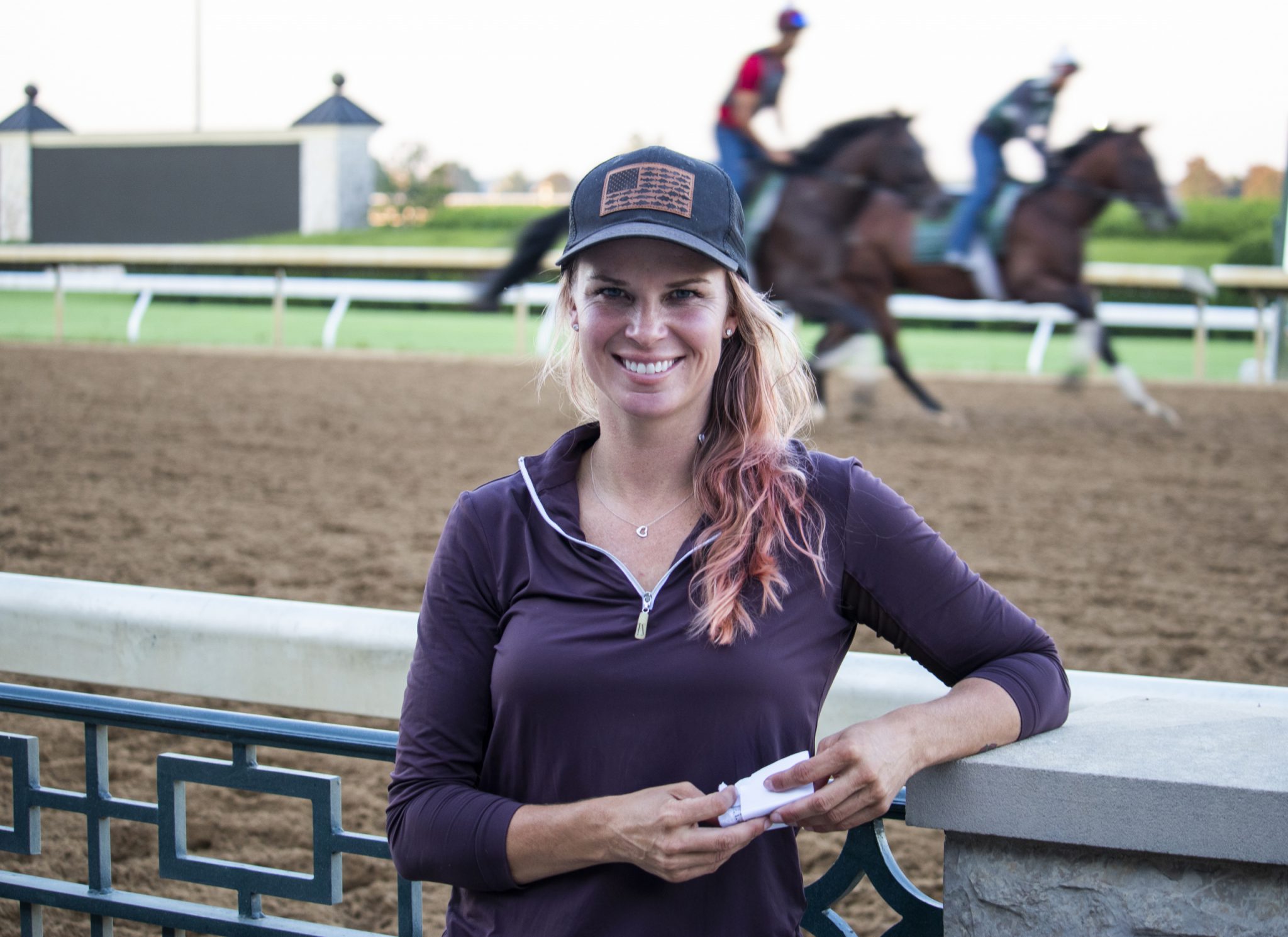 “It's a bit of a revolving door in that sense,” she said. “We really try to watch them breeze every week without trying to say if this horse is going to win the Derby or if it's going to be an absolute bust because they can grow and develop so much. They love proving you wrong and showing you how little you know, so we try to make sure that they all have the opportunity to basically become the best individual they can be with whatever talent and heart they bring to the table.”

With that mindset, Bisha said she aims to keep an open mind when a horse joins her stable, regardless of any reputation that might precede them.

“You have to create an environment where they know what's expected of them,” she said. “With the babies, you have an opportunity to develop them into being an individual that's not too tough on the track, not silly in the gate and not fractious in the barn. If you can get them to act right, they're usually kinder on themselves and handle their job better.”

Bisha first began working for Cox in 2016 as an exercise rider before taking on the role of assistant trainer. In her first year overseeing the incoming 2-year-olds, she estimates that she had about 30 or 40 juveniles in her care. When stable star Monomoy Girl (Tapizar) came onto the scene, the influx of new trainees began soon after.

With the growth of their program, Bisha said that she has had to evolve her managerial role. She finds herself spending more time in the office checking and rechecking registration papers and set lists, going over charts with Cox, and putting in notes from blacksmith visits or for vaccination schedules.

“We have a staff that helps with all that, but I always feel better if I have a hand in it too,” she admitted. “The more people that can check the boxes, the more you know it's thoroughly done.”

Countless top-level horses have been under Bisha's care since Monomoy Girl's outstanding career. Essential Quality (Tapit) will always be one that stands out to Bisha. The four-time Grade I winner spent his early days at Keeneland and returned to Lexington to race several times during his juvenile and sophomore campaigns.

“He came in here and was just head and shoulders above everybody else,” Bisha said. “Things with him were really streamlined, so there was no guesswork. He followed his own mind and liked to do his thing, but for the most part he never missed a work, he went straight to the races, and that was just him.”

Asked which horses she is most proud to have had a hand in bringing up, Bisha named off a few trainees that required a bit more legwork. One recent favorite is GIII Ohio Derby winner Tawny Port (Pioneerof the Nile), who was in her care almost all of last year as a juvenile. 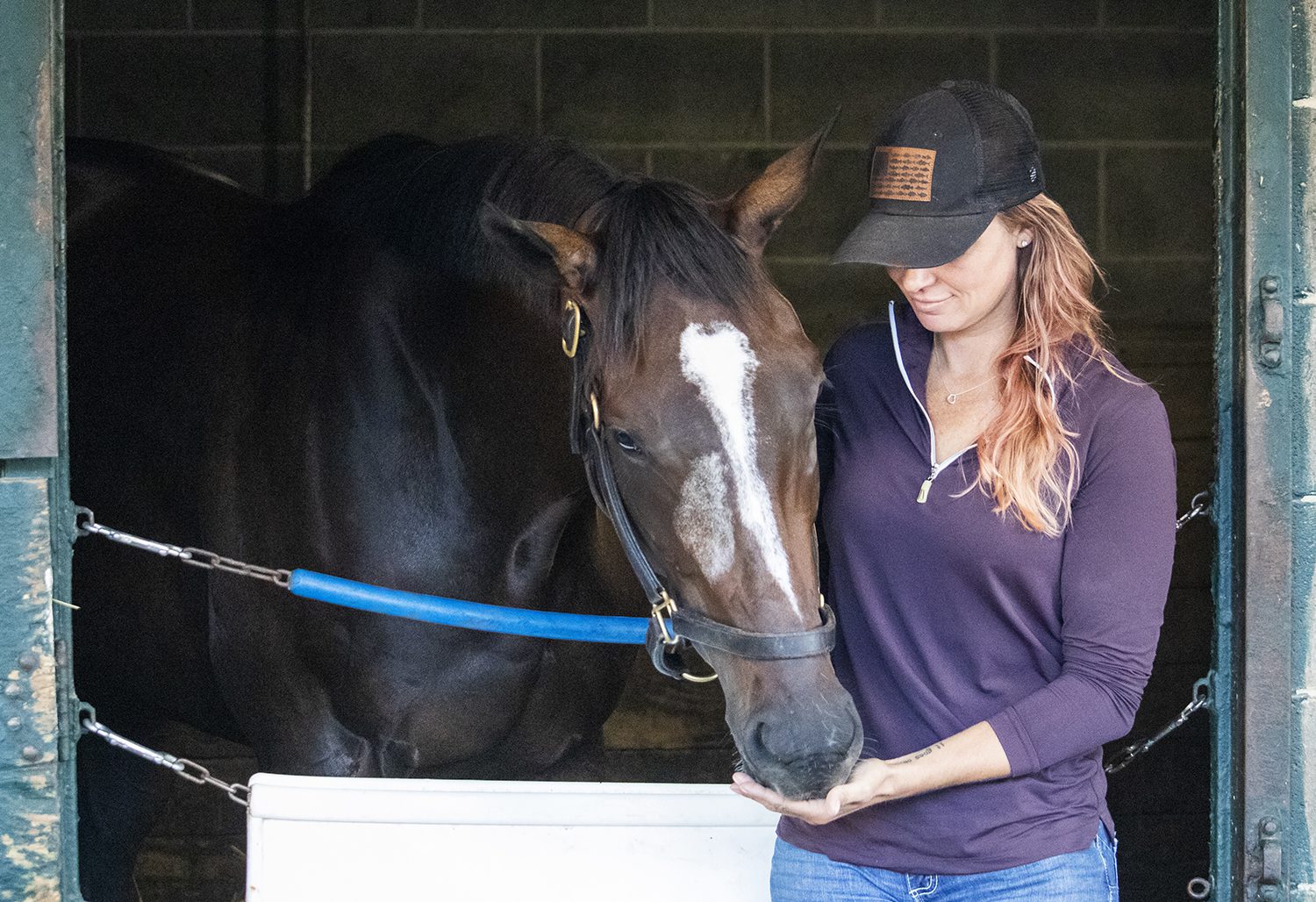 “He actually broke his maiden at Turfway over the winter,” she recalled. “I think those types of horses are really rewarding because they have more of, I guess a long-shot feel in our barn. To know that you helped develop them and you let them go on their schedule, that can be very hard, but it's a big success when it works out.”

Bisha said that as their program has continued to develop, one thing she believes they do best is keeping an open mind when it comes to helping their trainees progress.

“When we launched into this 2-year-old program and it started to really take off and get the numbers behind it, Brad and I would have heated discussions over how it was working out and what we were seeing,” she said. “After horses showing us how wrong we were and us eating crow a few times, I think we kind of learned that you really just have to let the horse develop and show you who they want to be.”

Bisha explained that every year, they make an effort to try something new or use a certain tool more frequently–maybe putting blinkers on more readily for a workout, warming up without the pony with a first-time starter, or going back to the starting gate one extra time before breezing.

“It might just be something small, but we try to stay open minded and focus on improving all the time and not just using our ego or what we think we know to get in the way of improving the program,” she noted.

Last year, Bisha was a finalist for the TIEA Dedication to Racing Award. Prior to her time with Brad Cox, the Washington native worked at tracks in Southern California and all along the East Coast. These days, as her former pupils are making headlines at high-profile racetracks like Saratoga, she prefers to stay back home in Lexington training up the next class of future stars.

“I've been to a lot of different tracks so I feel like I've seen enough and done enough to where I'm pretty content just staying here and doing this,” she said. “I don't mind traveling, but I find myself most fulfilled by training the 2-year-olds, so I don't feel any need to stray away from that.”