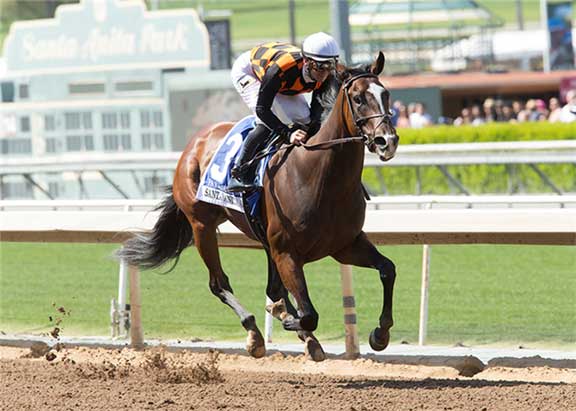 “TDN Rising Star” Paradise Woods (Union Rags) makes her first start back since disappointing as the favorite in the May 5 GI Kentucky Derby in Sunday's GIII Torrey Pines S. at Del Mar. Runner-up to reopposing fellow “TDN Rising Star” Delitefull Lady (Dialed In) on debut at Santa Anita Jan. 26, the bay returned to earn her own Rising Star badge with a decisive graduation in Arcadia Mar. 11. The Richard Mandella pupil demolished her rivals next out in the GI Santa Anita Oaks Apr. 8, finishing 11 3/4 lengths clear of subsequent Kentucky Oaks heroine Abel Tasman (Quality Road), who has won two more Grade Is since, and third-place finisher It Tiz Well (Arch), who finished second in last weekend's GI Alabama S. Heavily favored in the Run for the Lillies, Paradise Woods led early, but called it quits in the stretch, fading to 11th, and has been on the shelf since.

Third on debut to highly-regarded “TDN Rising Star” Unique Bella (Tapit) on debut at Del Mar last November, Delitefull Lady could not have looked better when earning her own Rising Star title in that Jan. 26 test. Subsequently shelved, she returned in a July 26 allowance here, finishing fourth behind the reopposing Bernina Star (Harlan's Holiday).