Palace Pier To The Test In Marois Treat 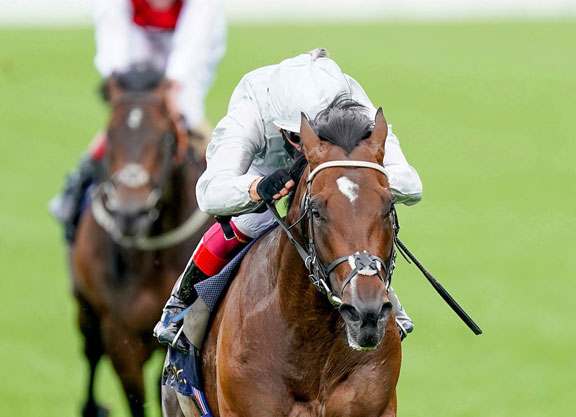 With Kameko (Kitten's Joy) heading to York, Europe's leading 3-year-old miler status is there for the taking and 'TDN Rising Star' Palace Pier (GB) (Kingman {GB}) might prove in Sunday's G1 Prix du Haras de Fresnay-le-Buffard Jacques le Marois that he already holds the rights to that title. Stepping straight to the highest level from novice and handicap company to land Royal Ascot's G1 St James's Palace S. with relative comfort on June 20, Sheikh Hamdan bin Mohammed Al Maktoum's unbeaten colt is in that unique position of being open to further progression despite having already crested one of racing's summits. With Deauville's ground reported as “really heavy” by Frankie Dettori on Saturday, an unknown element is in play and we will learn a lot more about the Clarehaven luminary after the event. His sire Kingman won this on similarly easy ground in 2014 and the fact that Frankie gave up the whole of York's Ebor meeting to take the ride speaks volumes of the regard in which he is held.

“He is very laid-back at home and goes through his routine in his own way, but is well,” he said on Saturday. “It's a tough task, but he's on an upward curve. Staying here was a very hard decision to make, but hopefully it will be the right one and Palace Pier can show us why.”

Frankie's memorable final day at Royal Ascot was also made up of an emphatic G1 Coronation S. success on the Niarchos Family's Alpine Star (Ire) (Sea the Moon {Ger}) and that homebred subsequently lost nothing in defeat when going down by a short neck to the subsequent G1 Nassau S. heroine Fancy Blue (Ire) (Deep Impact {Jpn}) in a strong renewal of the G1 Prix de Diane over 10 1/2 furlongs at Chantilly on July 5. A half-sister to the 2018 title-holder Alpha Centauri (Ire) (Mastercraftsman {Ire}) descended from the 1994 winner East of the Moon (Private Account) and the 1987 and 1988 heroine Miesque (Nureyev), she is better-qualified in that respect than the owner's other runner Circus Maximus (Ire) (Galileo {Ire}) to become a 10th Marois winner in these silks. Whether going this testing will help Alpine Star remains to be seen, but all three of her last starts have come on ground on the easy side of good and the Niarchos Family's racing manager Alan Cooper is in the dark. “We've had quite a lot of rain in Deauville over the past few days, which may play a part in what happens,” he said. “Both horses merit their place in the field–they're both Group 1 winners over a mile and both Jessica and Aidan are happy with their horses. Circus Maximus is a 4-year-old and Alpine Star is a 3-year-old filly, so it will be an interesting clash of the generations in what looks a good, competitive race.”

Taking on the 3-year-olds is Robert Ng's defending champion Romanised (Ire) (Holy Roman Emperor {Ire}), who confirmed that he was at least as good as ever if not better when registering back-to-back wins in The Curragh's G2 Minstrel S. over seven furlongs last time on July 18. The 2018 G1 Irish 2000 Guineas hero, who was controversially beaten by Circus Maximus in the G1 Prix du Moulin at ParisLongchamp in September, would appreciate any drying of the ground.

“After a long lay-off, we were delighted with his performance in the Minstrel,” trainer Ken Condon said. “The horse gave Billy [Lee] a great feel throughout the race and when he needed to he had that potent turn of foot he possesses. It was lovely to see it. He was able to get out of a tight-enough spot and quickened up very well. I'm sure he's come on plenty for that race. He's in good shape and we're looking forward to Sunday. It looks a really good championship race, but we're happy with his condition.”

Circus Maximus took his tally of Group 1 wins to three in Royal Ascot's June 16 Queen Anne S. before beating all bar Mohaather (GB) (Showcasing {GB}) in Goodwood's G1 Sussex S. on July 29 and he is the one main contender who would benefit from testing conditions, which Andre Fabre believes is also the case with 'TDN Rising Star' Persian King (Ire) (Kingman {GB}). He won the G1 Poule d'Essai des Poulains at ParisLongchamp on heavy last May and showed his versatility when scoring on a faster surface in the nine-furlong G1 Prix d'Ispahan at Chantilly last time on July 19. “It looks a really strong race, but Persian King is back to his best now and with storms around I think softer ground will suit him,” Andre Fabre said. “It looks very interesting, especially with the 3-year-olds who won at Ascot. Since he came back from his injury I've been happy with him–he's done all I have asked.”