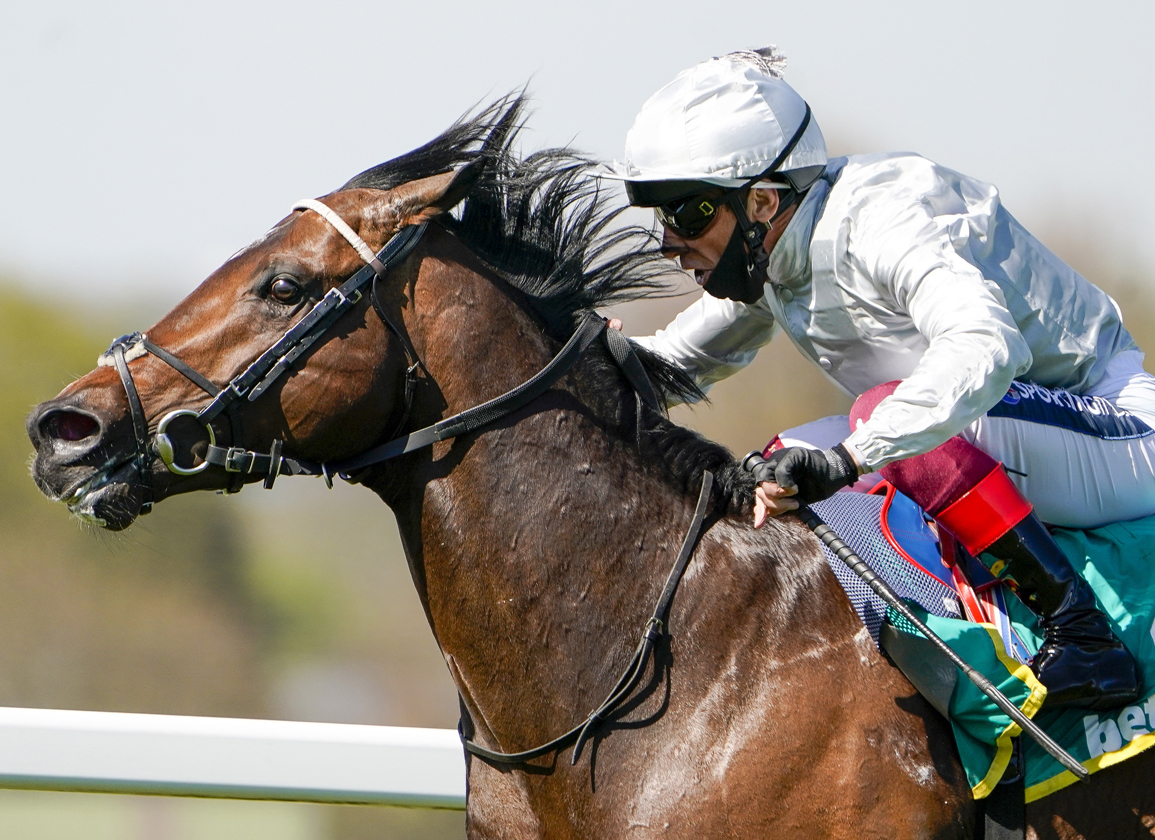 Having missed the G1 Sussex S. due to a minor setback, Palace Pier (GB) (Kingman {GB}) is back in the picture as he defends his title in Sunday's G1 Prix du Haras de Fresnay-le-Buffard Jacques le Marois at Deauville. More workmanlike than impressive when last seen in the G1 Queen Anne S. at Royal Ascot June 15, Sheikh Hamdan bin Mohammed Al Maktoum's TDN Rising Star has a six-pound weight-for-age gift to present to Poetic Flare (Ire) (Dawn Approach {Ire}) and will need to be at his best to contain Jim Bolger's hard-grafting 3-year-old colt miler supreme. Judged on his prior win in the G1 Lockinge S. at Newbury May 15, John and Thady Gosden's 4-year-old is the one to beat even allowing for the scintillating G1 St James's Palace S. victory of his Irish challenger. John Gosden is wary of the effects of his recent problem, however. “He had a blood disorder going into Goodwood and it just took a little time to get over it. We're just finding our way back, he's worked well in towards the race but you could do without those issues coming in the middle of the season,” he said of the bay, who bids to become the first since Spinning World to win consecutive renewals in 1997. “He won the Jacques le Marois last year, but it will be different conditions this year. It's dry and warm and it's a small but elite field. Like most horses, I think he just wants good ground, they can show their acceleration on good ground and that is absolutely his favourite.”

Poetic Flare, who also took the May 1 G1 2000 Guineas at Newmarket, has a definite achilles heel and that is ground slower than good with his defeats this term all on rain-eased going. Brushed aside by Alcohol Free (Ire) (No Nay Never) in the Sussex on soft July 28, he destroyed the opposition on good-to-firm in the June 15 St James's Palace and with the sun beating down on Normandy conditions can work in his favour. Gosden has maximum respect for Poetic Flare and added, “He is a huge threat, obviously, I don't think he was entirely in love with the ground at Goodwood but he's a phenomenal horse and has put in such great performances–he's the top three-year-old colt. It's a very smart race but so it should be, it's the top mile race in France.”

Provided the first two run up to their best, it is difficult to see the winner coming from elsewhere especially as last year's runner-up Alpine Star (Ire) (Sea the Moon {Ger}) was disappointing when turned over on her belated seasonal bow in the Listed Lyric Fillies' S.  over an extended 10 furlongs at York July 23. Ballydoyle's Order of Australia (Ire) (Australia {GB}) was beaten over four lengths when fifth in the Sussex and his GI Breeders' Cup Mile victory is looking a notch or two below this level.

If there is a chance of upset, it could come from Godolphin's unexposed Midtown (GB) (Dubawi {Ire}), who was third on his seasonal return in the seven-furlong G1 Prix Jean Prat here July 11. He may be the pick of the Andre Fabre-trained duo, with Victor Ludorum (GB) (Shamardal) looking a touch exposed despite having enjoyed a confidence-boosting success in the G3 Prix Messidor at Chantilly July 18. “This has been the target for Victor Ludorum all year and it is very exciting to see him back over the straight mile at Deauville on good ground,” Godolphin's Lisa-Jane Graffard said. “It's obviously a very competitive group 1 and he will have to be at his very best, but we feel that he is. Andre couldn't be happier with Midtown's progress since the Prix Jean Prat. He has thought an awful lot of the horse since his debut last year and the only question mark is whether he is more effective on softer ground.”