Owners Who Finished Behind Maximum Security Want Him DQd 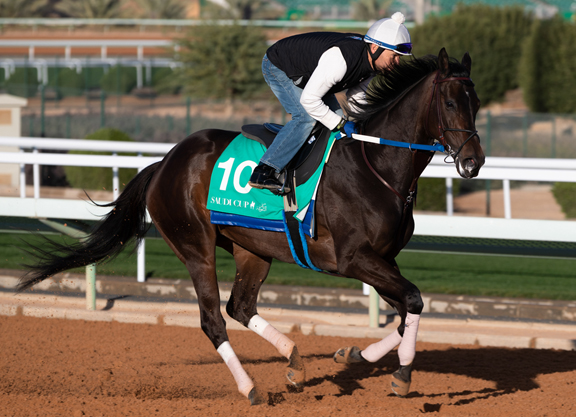 The owners of Midnight Bisou (Midnight Lute) released a statement Wednesday saying they expect Maximum Security (New Year's Day) to be disqualified from all his races, which would include the $20-million Saudi Cup. If so, Midnight Bisou would be placed first in the race.

Bob Donaldson, the owner of Spun to Run (Hard Spun), who was second behind Maximum Security in the GI Cigar Mile H., also weighed in, saying he wants the New York Gaming Association to disqualify Maximum Security from that race.

Midnight Bisou, who was beaten three-quarters of a length in the rich Saudi race, is owned by the partnership of Bloom Racing, Madaket Stables and Allen Racing. Wednesday, Bloom Racing managing partner Jeff Bloom issued a statement which read: “At this time we are following the news as is everyone throughout our industry. We are, of course, deeply concerned and frustrated of the apparent cheating and blatant disregard for the equine athletes that has been pervasive for all the accused in the recent Federal indictments. We could not be more proud of our mare and her accomplishments, in particular her breathtaking performance in the Saudi Cup, where she handily beat 12 of the best horses in the world. One would expect that Maximum Security would be disqualified from all his races, including the Saudi Cup, due to the recent findings of the use of undetectable PEDs in his training and races. Regardless, we are excited to continue the campaign with Midnight Bisou and watch our incredibly talented mare race.”

Maximum Security was trained by Jason Servis, who was among 27 people indicted Mar. 9 as part of a horse doping scheme. The indictment maintained that Servis had used illegal drugs with virtually all of his horses over the last several years.

At stake for Midnight Bisou and her owners is the winner's share of the Saudi race, which is $10 million. By finishing second, the mare is believed to have earned $3.5 million.

When reached by the TDN, Bloom declined to answer follow-up questions.

It was not immediately clear what channels the owners could use to try to have the original outcome reversed or whether or not Saudi racing officials would even entertain an appeal.

Donaldson said he would give New York regulators a chance to disqualify Maximum Security before taking legal action.

“I feel he should be pulled from the Cigar Mile and we should get the winner's share,” Donaldson said. “I have an attorney that is ready to act if he needs to. I hope they do the right thing, pull the horse out and redistribute the purse. I want to see first what they do. I don't want to jump down the Gaming Commission's throat before they have time to do something. If nothing is done, I will file a suit.”

There is no precedent in U.S. racing for disqualifying a horse that did not test positive for a drug in the race in question. According to the FBI's investigation, the drugs Servis had been using were undetectable by standard testing procedures. In addition, a disqualification from the Cigar Mile could lead to massive headaches involving hundreds of races in which Servis horses won or finished in the money.

Donaldson joined the chorus of those who have been saying that the sport will ultimately benefit from the indictment of the alleged cheaters.

“This is going to hurt a long time before it gets better,” he said. “It's going to hurt for a while. I think once we get through this, the sport will be better off and for generations to come. This needed to happen. They sat on those guys like they were in the mob. I don't think we even know a sixteenth of what's been going on.”

The Stronach Group, which owns Gulfstream Park, the primary track Navarro and Servis had been competing at at the time of their indictments, issued a statement saying that all horses trained by those indicted were being prohibited from racing indefinitely.

“Out of an abundance of caution for the health and safety of the horses in the care of those criminally charged, and with the utmost regard for the integrity of our sport, The Stronach Group has scratched all horses that were entered by the indicted individuals indefinitely and will also be refusing any future entries with respect to the horses that have been under their care until stand-down protocols are finalized,” the statement read.

It was not immediately clear what “stand-down protocols” entailed.

In a related development, New Mexico Senator Tom Udall renewed his calls for Congress to pass the Horse Racing Integrity Act, which would put the U.S. Anti-Doping Agency in charge of policing the sport.

“I have been calling for real regulation of horse doping in the United States for many years,” Udall said in a statement. “Every other major racing nation does this. We don't. And horses are dying and it's corrupting a once-great sport. [Monday], federal prosecutors in the Southern District of New York brought charges against 27 people involved in a massively corrupt horse doping conspiracy that was enabled by this regulatory vacuum.”