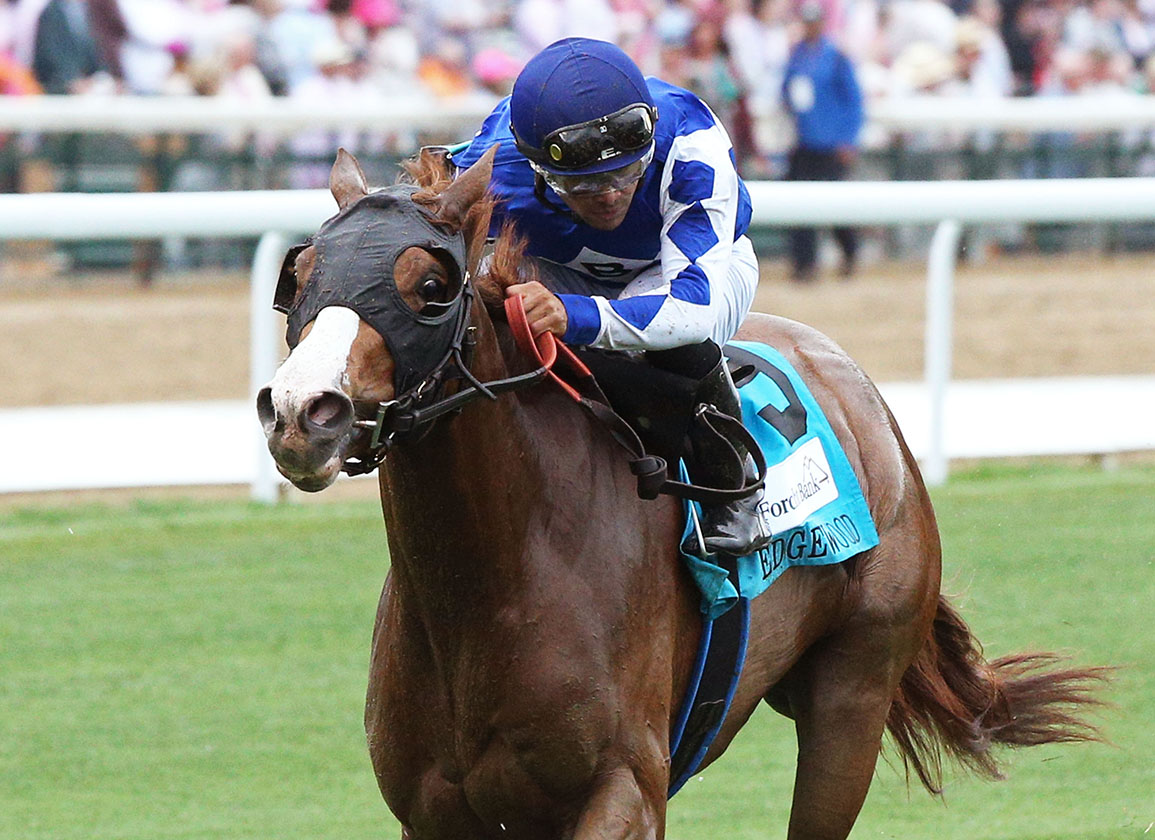 The GII Edgewood S. on the Kentucky Oaks undercard became a milestone victory for owner Marc Detampel when his 'TDN Rising Star' New Year's Eve (Kitten's Joy) rallied from last to first in a competitive 10-horse field to claim the $500,000 turf contest.

Detampel, who hails from Chicago, doesn't get the chance to see his racehorses on a regular basis, but when he visited New Year's Eve two weeks ago at Brendan Walsh's barn, his anticipation for the filly's next start grew.

“I hadn't seen her in a while and she had really matured,” he recalled. “I knew it would be a tough race. Chad [Brown] had three in there. I was hoping she would run her race, come charging at the end and if she grabs a piece of it, that would be great.”

Sent off at 14-1 with blinkers added for the first time, New Year's Eve broke clean and settled in her preferred spot at the back of the pack, but started picking off horses as she approached the far turn. Piloted by Luis Saez, the chestnut swung four wide and surged past her rivals to cross the wire going away.

“To see her win was such a thrill,” said Detampel, who made the trip to Louisville with his son for the Grade II. “I thought Luis did a great job. He sensed they were slowing down in front of him and so he moved her outside and let her go. It was very impressive and she certainly has room for improvement.”

Detampel has been involved in several graded stakes-winning partnerships, including that of MGSW Cary Street (Smarty Jones), but last Friday's score marked his first graded win as a sole owner.

Managing director for the human resource consulting company Felix Global, Detampel was first introduced to racing over a decade ago by his neighbor John Wade, a co-owner in Hunter Valley Farm. The pair watched races together on Saturdays in Chicago, but after Detampel joined Wade on a trip to Lexington, he was eager to try out his hand in ownership. He sought the help of Hunter Valley's Fergus Galvin, who assisted him in getting his racing stable off its feet and now advises Detampel with his 25-horse racing stable.

“Fergus has taught me the industry and answered all my dumb questions,” Detampel said. “After 12 years I certainly can talk about racing with the average person, but when you're around people like Fergus, I learn something new every day.”

Galvin picked out New Year's Eve for Detampel two years ago. The filly failed to meet her reserve at the Keeneland September Sale, but returned to the auction ring a month later at the Fasig-Tipton October Sale. The daughter of Kitten's Joy was out of a two-time winner in Brazil by Elusive Quality with just one Brazilian winner on her produce record at the time of the auction.

“I try to get Marc some value and I liked her at the sale,” Galvin recalled. “There was a little knock on her pedigree in the fact that the mare hadn't produced too much, but she was a very nice physical. She moved well and had a bit of size. I liked that the dam was by Elusive Quality, who is a very good broodmare sire.”

“He called me and told me that we have to buy this filly,” Detampel added. “There was a little something extra in his voice with this one.” 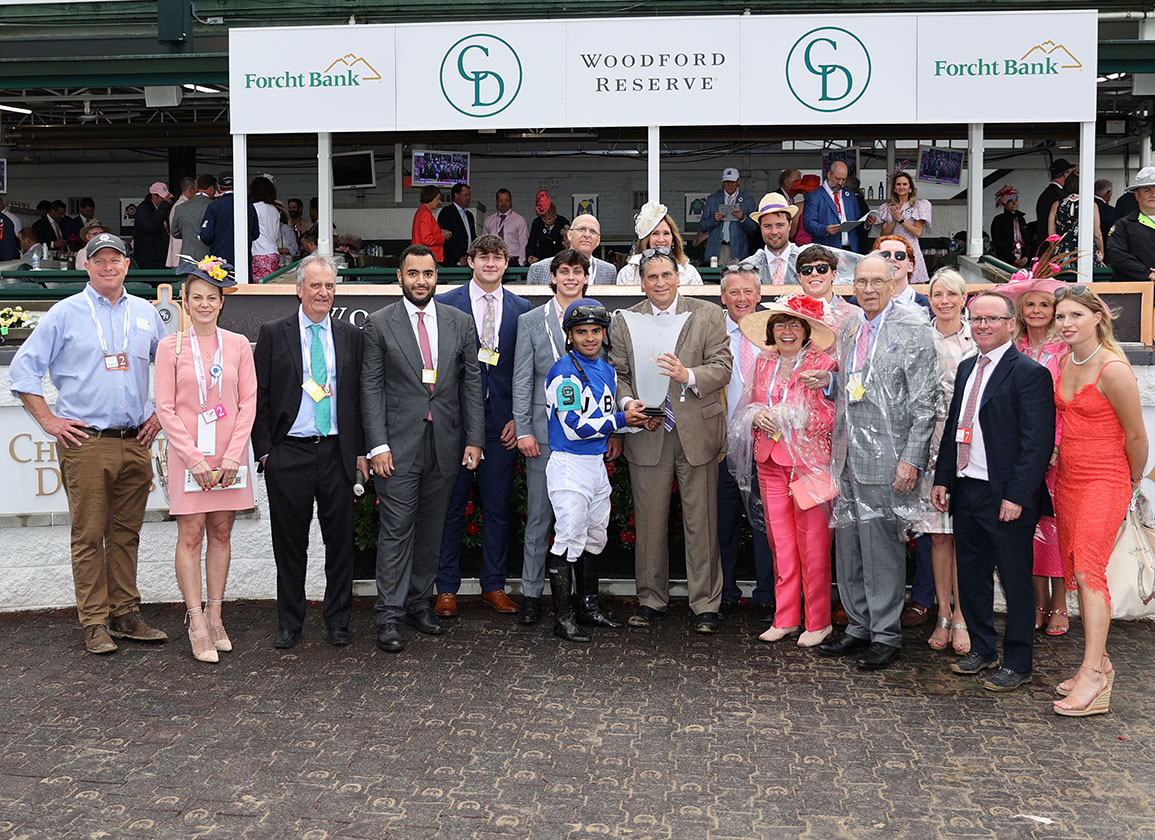 Purchased for $105,000, New Year's Eve was sent to Brendan Walsh and showed promise from the start. Named a 'Rising Star' in her flashy debut at Fair Grounds last December, she added a second win a month later in an optional claimer at the same track and then finished third after a troubled trip in the Allen Black Cat LaCombe S. in her final start before successfully stepping up in class in the Edgeway.

“We've been doing a lot of celebrating,” Detampel said when asked if the team has discussed where the blaze-faced sophomore could wind up next. “She loves Churchill and there's a Grade II coming up there, but we haven't really talked about it. We've enjoyed it and are letting it all sink in. She'll only get better and she may even like to go a little longer.”

An exciting 3-year-old campaign is undoubtedly in store for New Year's Eve, but Detampel has more to look forward to this year with shares in several other recent graded stakes-performing fillies. He owns Family Way, a daughter of Uncle Mo who recently ran second in the GIII Bewitch S., in partnership with Hunter Valley Farm and Debra O'Connor, and is also a partner on GIIISW Caravel (Mizzen Mast) along with Qatar Racing and Madaket Stables LLC.

Detampel said his racing strategies have evolved since he first jumped into the business 12 years ago.

“When I first started, I just wanted action,” he explained. “I remember looking through so many past performances and claiming so many horses. Now I don't claim at all really. I buy more yearlings instead of 2-year-olds and am more international. I've bought in France at Arqana and I have a few in Ireland. We bring those over for the Kentucky Downs meet a lot and have had success doing that. We're focusing on becoming more diversified and more international.”

Detampel added that in recent years, he has increased his involvement in the breeding side of the industry. His current roster of broodmares includes former stable stars GIIISW Outburst (GB) (Outstrip {GB}) and MSW Freudie Anne (Freud). This February, he purchased the dam of New Year's Eve, Awesome Rafaela (Brz), for $95,000. The Elusive Quality mare produced a Volatile filly in March and is back in foal to Kitten's Joy.

With a focus on racing well-bred fillies, Detampel said his next big goal is to someday return to Churchill Downs on Oaks Day, but this time for the main event.

“Last Friday's win was a big one, but we would love to win the Kentucky Oaks someday,” he said. “The Breeders' Cup would definitely be another goal, but even more than that, the social and friendship aspect and the comradery of it is phenomenal. My son Ben, who is a senior in high school, came to the races with me on Friday and brought three friends. It was his first big race and to see him smiling in the winner's circle, I think he's going to like horse racing even more now.”