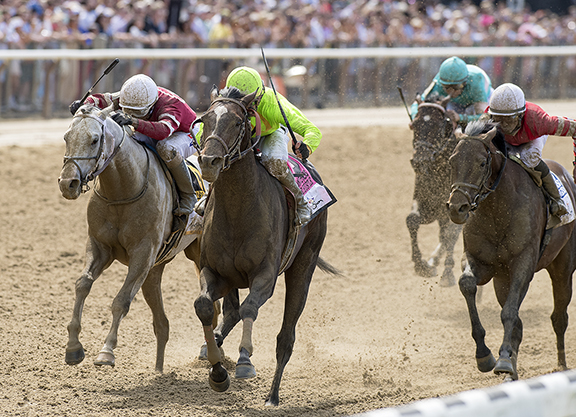 On the board in a trio of stakes this season, including a well-beaten second in the GIII Pat Day Mile on GI Kentucky Derby day last out May 4, Something Special Racing's Hog Creek Hustle (Overanalyze) picked a good time to break through as he led home a parade of longshots in Saturday's GI Woody Stephens S. The 18-1 shot broke sharply, but dropped back to his customary off-the-pace spot with only Nitrous (Tapit) further behind. Steadied ever-so-slightly off of heels heading down the backside and along the fence, he came off the inside and began picking off horses along the bend behind a snappy :44.53 half over a very speedy surface. Hog Creek Hustle shifted in sharply while switching leads in upper stretch, prompting Mind Control (Stay Thirsty) to get squeezed out from between he and Much Better (Pioneerof the Nile), but he leveled off from there to seize the lead late and hold off the fast-finishing Nitrous (Tapit) by a neck. Borracho (Uncle Mo) also rallied at 15-1 for third while pacesetting Strike Silver (Violence) held on for fourth to round out a $34,454.50 superfecta for a buck.

An inquiry was conducted into the move Hog Creek Hustle made at the top of the lane, but no change was made–it appeared that Mind Control was out of horse when the incident occurred.

“He didn't have any speed. I let him fall back and run his own race. When it was time to go I just went around everybody to where he could get some clean running room,” winning pilot Corey Lanerie said. “When I turned for home and tried to switch leads, I had no intention of coming over on [Mind Control], but he does that when you try to grab the right rein, he tries to run away from it. I was lucky that they left him up, because he was the best horse, but he needs to learn how to stay straight.

“I was worried about [the inquiry], especially watching the replay. I know he bothered [Mind Control] a little bit, but the fact he was done helped our cause. If that horse kept running and had gotten a better position, I think they would have disqualified us.”

One of a trio of impressive debut-winning 2-year-olds trainer Vickie Foley unveiled at Ellis Park last summer, Hog Creek Hustle failed to lift a hoof when stretched out for Churchill's GIII Iroquois in September. He bounced back off a brief freshening to annex a key Churchill optional claimer going this distance Nov. 10, but settled for third after a slow start and wide journey in the Sugar Bowl S. at Fair Grounds Dec. 22. He rallied for second at 13-1 behind War of Will (War Front) in the GIII Lecomte S. Jan. 19, and was fourth behind that one and GI Kentucky Derby winner Country House (Lookin At Lucky) in the GII Risen Star S. there Feb. 16. Eighth in the GII Louisiana Derby Mar. 23, he proved one-turn racing was his game when shortened up a furlong for the Pat Day Mile.

“I was nervous during the inquiry,” Foley admitted. “We're from Kentucky and came to the Big Apple, so I was a little nervous. It went our way and I think [the stewards] did the right thing. This is my first Grade I win, and what a thrill. He was tough in the paddock, which he always is, and then with the inquiry, it was stressful. But I knew there would be blistering speed in this race, and I knew that's what we needed. We were going for and hoping for the speed coming back to us. That's why we thought we'd be perfect in this race and why we came. Corey gave him a good ride, too.”