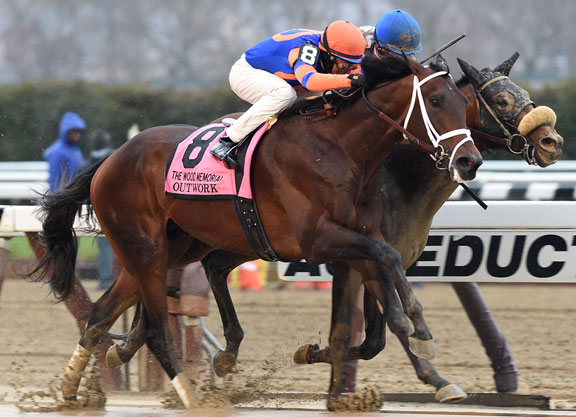 Repole Stable's Outwork (Uncle Mo) exited his victory in Saturday's GI Wood Memorial in fine shape and will now look ahead to the May 7 GI Kentucky Derby, according to trainer Todd Pletcher.

“He seemed very happy with himself, and I'm pleased with the way he's come out of the race so far,” said Pletcher, who will also point GII Lambholm South Tampa Bay Derby winner Destin (Giant's Causeway) at the Derby.

Pletcher hopes Outwork learned something from his win Saturday, when he was nearly caught late by Trojan Nation (Street Cry {Ire}).

“He definitely has a tendency to idle,” Pletcher said of the colt. “In his mind, the race was won when he got to the top of the stretch and made the lead. Thankfully, it didn't cost him the win yesterday. His ears go straight forward and he's looking around. Hopefully that's something he'll continue to mature through and get better and learn how to really polish off his races.”

After nearly upsetting the Wood at 81-1 and still winless in his career, Trojan Nation could also start next in the Kentucky Derby.

“I talked with the owners last night, and he's definitely in consideration for the Derby,” trainer Paddy Gallagher confirmed. “We've got about a month until the race, so he's going to ship back here to California either Tuesday or Wednesday and we'll train him here before making a final decision and deciding when to ship to Kentucky.”

The Wood's third-place finisher Adventist (Any Given Saturday) is on the Derby bubble and trainer Leah Gyarmati said they would keep all options open. Adventist was also third in the GIII Gotham S. and GIII Withers S.

“We'll let everybody else's plans dictate the decision we make on the Derby,” Gyarmati said. “I haven't talked to [owner] Jeff [Treadway] yet, but if it happens that would be great. He came out of the race great, ate up all his feed and we know he can get the 1 1/4-mile distance with the trips he's encountered, so we'll see.”