Out of the Shadows, Drury Could Collect First Graded Win in Blue Grass 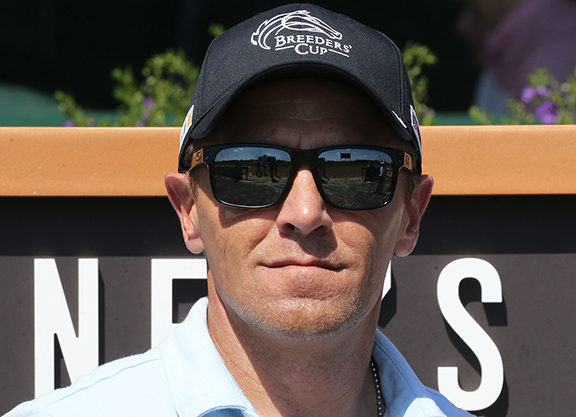 There is paying your dues and then there is the story of Tom Drury, Jr.

Thirty-eight years after he started his training career at age 18, Drury will go into Saturday's GII Toyota Blue Grass S. at Keeneland with an outstanding chance of winning a prestigious $600,000 race that could be a gateway to the GI Kentucky Derby. His Art Collector (Bernardini) is the co-second choice on the morning line at 5-1 and is coming off a 6 1/2-length win in an allowance race at Churchill Downs. A win would be Drury's first in a graded stakes.

Through much of the eighties and nineties, Drury wasn't worried about winning a Blue Grass. He just wanted to make ends meet.

“It took me forever just to win my first race,” he said. “There were a couple of years where I didn't win a race at all. This was when I had three or four horses and was having to gallop on the side. I was getting by, but just getting by and that was a long time.”

From 1984 through 1988, he won a total of two races. In 1992, he went 0 for 25. He was 0 for 4 in 1994.
Despite his record, Drury had managed to impress the right people. Based at a training center, Skylight Training Center in Goshen, Kentucky, and in need of income, Drury was well positioned to work with other trainers who needed someone to work behind the scenes to get their horses ready for the races. Bill Mott was among the first to use Drury's services. Al Stall, Jr., Frank Brothers and Neil Howard were among other trainers who trusted some of their better horses to Drury. The horses that Drury had a hand in includes: Tom's d'Etat (Smart Strike), Madcap Escapade (Hennessy), Lea (First Samurai) and Hansen (Tapit).

Drury tried to do more than just prepare the horses. He made it a priority to take advantage of the opportunity to work with top trainers. He was always watching and learning.

“I have been able to see what the thought process was with these other trainers,” he said. “I followed the way they approached training that kind of horse. l I tell people I got a Harvard education because I have been able to work with those guys. That really helped give me confidence.”

It didn't happen overnight, but word started to get around that several top trainers were working with Drury and that helped bolster his reputation within the sport. He eventually would have 15 to 20 horses of his own and he started winning races. That led even more owners to give him a chance.

“When people start hearing that you are working for Bill Mott that automatically gives you credibility,” he said. “That led to me getting involved with Frankie Brothers and Bruce Lunsford. I've gotten my foot in the door with Claiborne Farm and Spendthrift has given me horses. I feel blessed. We try to do a good job. It's all snowballed into something special.”

His numbers steadily improved. He won 39 races in 2018, with a winning rate of 28%. He won with 25% of his starters in 2019, going 35 for 140. But what he lacked was the type of horse that could break through and put him in the winner's circle for an important race. Art Collector represents the type of opportunity that has eluded him for the 38 years he's been in the business.

Ironically, Art Collector wasn't supposed to land permanently in Drury's barn. Through his 2-year-old season, he was trained by Joe Sharp. Entering the year, Lundsford was looking to make some changes and his intent was to send Art Collector to trainer Rusty Arnold. With Arnold in Florida, the plan was to let Drury oversee Art Collector until Arnold made it back to Kentucky. But COVID-19 complicated Arnold's travel plans, and by the time he got to Kentucky, Drury had already won a May 17 allowance at Churchill with Art Collector. It was decided to just let Drury keep the horse.
His June 13 allowance win at Churchill was the race that put him in the mix for the Blue Grass. It was his first try around two turns on the dirt.

“He certainly answered some questions and really jumped forward,” Drury said. “When Brian [Hernandez, Jr.] called on him, he was full of run. We're hoping to see that same kind of performance this weekend.”

His opposition Saturday will include Mott, Mark Casse, Steve Asmussen, Dale Romans, etc. For them, running in a $600,000 graded stakes has become routine. For Drury, this is far more than just another race.

“It takes a lot of people to get a horse to any race, let alone the Blue Grass,” he said. “For me and my staff, we have been watching from afar with a lot of really good horses. This is our chance to prove ourselves to the world and we are anxiously looking forward to it. For me to be in a situation like this, words can't really describe it. It's a big deal and something I am not taking for granted.”