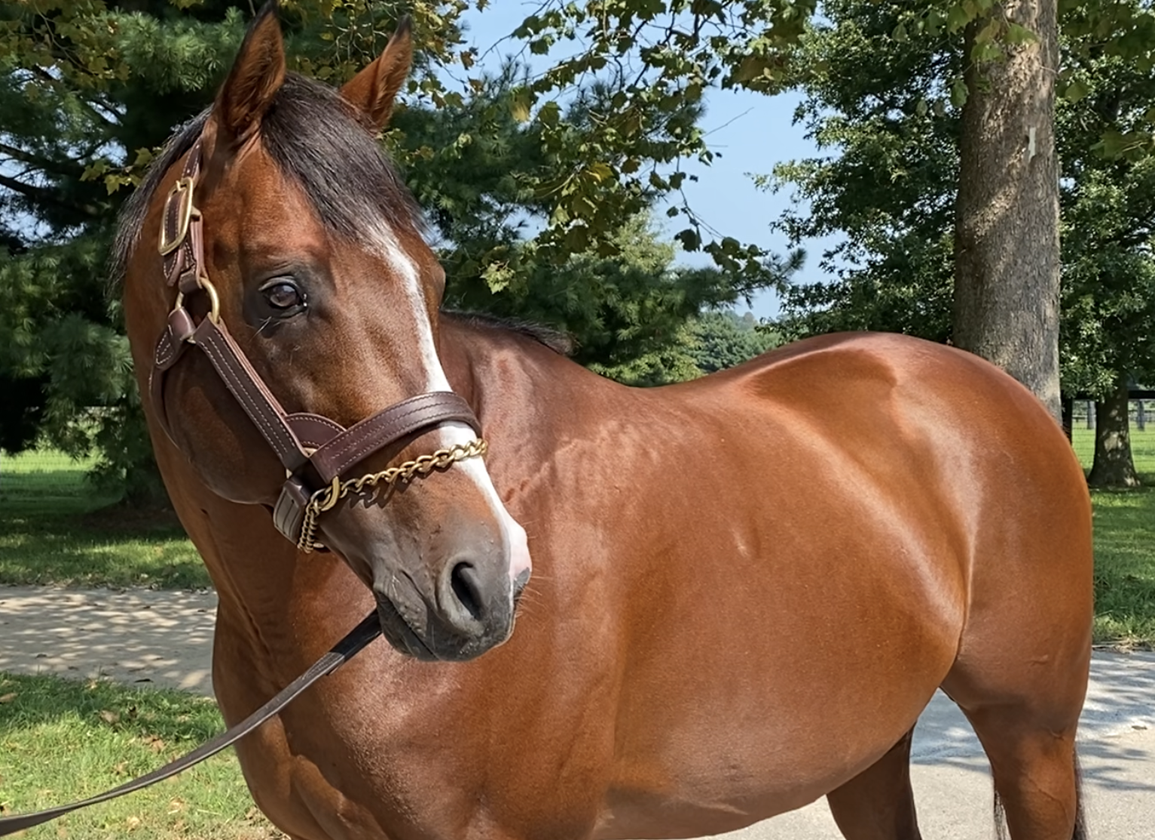 Champion Oscar Performance will be represented by 33 yearlings at the upcoming Keeneland September Sale. | Katie Ritz

With the Keeneland September Sale fast approaching, Gray Lyster of Ashview Farm is looking forward to showcasing his colt by Oscar Performance (Kitten's Joy-Devine Actress, by Theatrical {Ire}). Bred by Colts Neck Stables, the bay catalogued as Hip 892 is a half-brother to the talented MGSW Venetian Harbor (Munnings). The sibling duo is out of the stakes-placed mare Sounds of the City (Street Cry {Ire}), who hails from the family of champion sprinter Safely Kept (Horatius).

“He's actually the fifth generation of the family that we've raised here at Ashview,” Lyster said. “He's a really nice medium size and an unbelievable mover. You can see the Oscar Performance in him, but you can also see the mare and the half-sister Venetian Harbor. They all kind of come together. He looks really racey and his walk is smooth and powerful at the same time.”

But Lyster continued in saying that the yearling's best characteristic is his eye-catching balance, a factor Lyster puts heavy weight upon when determining a yearling's probability of future success.

“His whole body moves together and he's fluid,” he explained. “Everything matches. His hip matches his shoulder, which matches his neck. It's all tied in well together. For me, balance is the most important thing. I think that's what you see in the paddock of these big races. You see all different shapes and sizes, but you always see a balance of the whole horse tied together in front of you.”

Champion Oscar Performance is represented by his first crop at this year's yearling sales. When Price Bell of Mill Ridge Farm was asked to explain some of the qualities he has noticed in the multi-millionaire's first few crops, their consistent balance was the first factor he noted.

“The yearlings and foals that we have on the farm have all had great balance,” he said. “They're nice movers and they really get their hind leg under them well. The way their neck ties into their shoulders, they look like really good racehorses. Time will tell until they get into the gate, but at this stage they certainly exhibit the qualities that we really hoped for.” 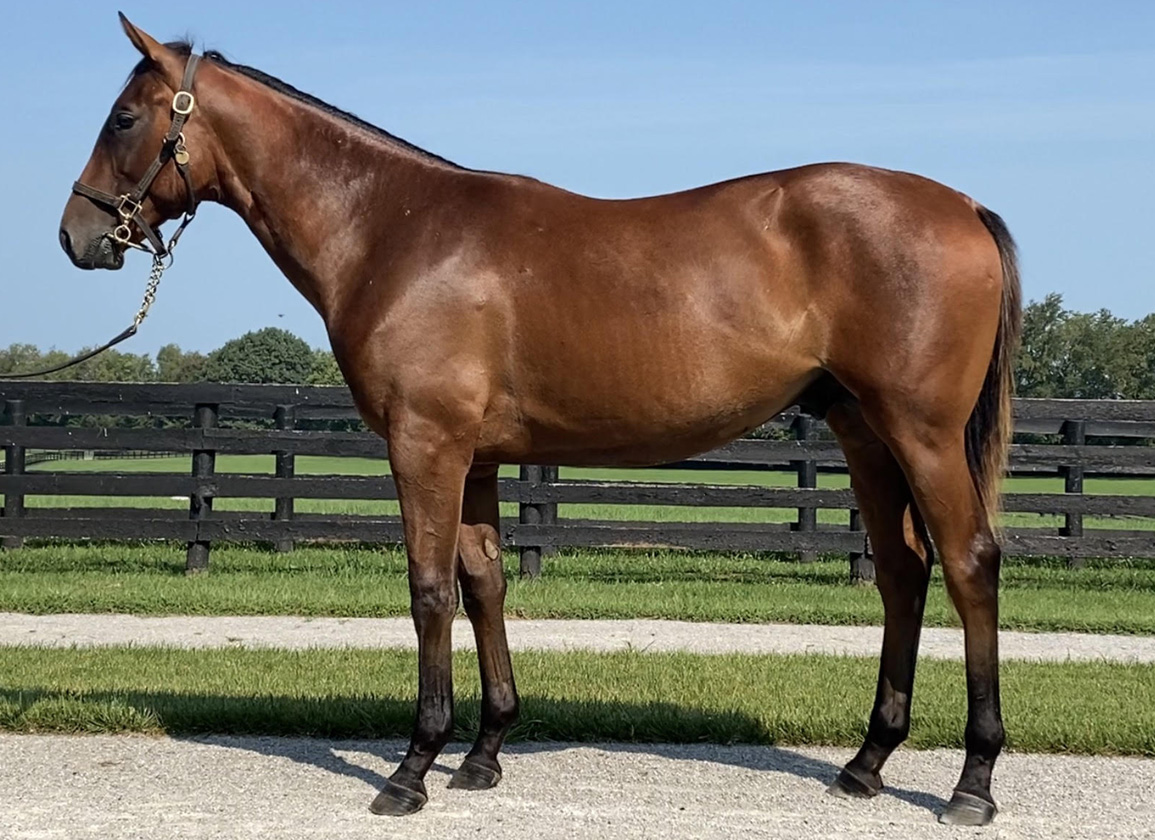 Oscar Performance colt out of Sounds of the City will sell as Hip 892 with the Ashview Farm consignment. | Katie Ritz

Bred and owned by Mr. and Mrs. Jerry Amerman, Oscar Performance was foaled and raised at Mill Ridge Farm. Bell said the son of Kitten's Joy was  well-regarded physically as a youngster and that those traits came to fruition when Oscar Performance went on to prove himself on the racetrack.

“Physically, he's a very imposing horse, especially for a turf horse,” he said. “Oftentimes we don't think of [turf horses] to be very physical, but to stand into him, he's over 16.1 hands. Because he's so well proportioned, you have to really stand into him to see just how big he is. He has a very straight hind leg, which I think helped him accelerate quickly and I think that's a little atypical of some turf horses.”

Campaigned by Amerman Racing, Oscar Performance broke his maiden at second asking as a juvenile. That 10 1/4-length win at Saratoga gave him the 'TDN Rising Star' nod. From there, the Brian Lynch trainee took the GIII Pilgrim S. by six lengths followed by a winning, front-running effort in the 2016 GI Breeders' Cup Juvenile Turf.

“His win in the Breeders' Cup was really something to marvel,” Bell said. “He broke from the 13 hole, beat everyone to the turn, dictated a quick pace and then accelerated down the stretch to really put a good group of horses away. In fact, Channel Maker (English Channel) was in that field and could now be one of the best turf horses in the division today.”

At three, Oscar Performance reeled off consecutive victories in the GIII Pennine Ridge S., GI Belmont Derby Invitational S. and GI Secretariat S. while also placing in the GI Joe Hirsch Turf Classic S. The following year, he shortened back to a mile in the GIII Poker S. and broke a 20-year-old track record to win by 1 ½ lengths in a final time of 1:31.23. He made it to the winner's circle again at four in the GI Ricoh Woodbine Mile S. and retired later that year with earnings of over $2.3 million.

“Oscar Performance was a brilliant racehorse–arguably Kitten's Joy's most brilliant racehorse,” Bell said. “He happened to also be running when Roaring Lion was running and I think the two of them would compete for that title. He competed in all of his races without Lasix or race-day medication and as the standards of racing adjust to medication-free on race day, it will be interesting to see if that has an effect on his offspring.”

Oscar Performance began his career at stud in 2019 with a $20,000 initial fee. He held the same fee the following year and bred 234 mares in his first two seasons.

Bell said the Mill Ridge team did not shy away from the fact that Oscar Performance was a top performer on the grass when promoting their new stallion to breeders, noting that he believes the buying market is finally beginning to seek out turf runners.

“I think the investment that America is making in turf racing attracts buyers to him,” Bell explained. “You no longer have to make excuses for turf horses. If nearly 50% of races are run on turf and the current turf stallions in America are aging, Oscar Performance is a great opportunity to take advantage of the shift into turf racing.” 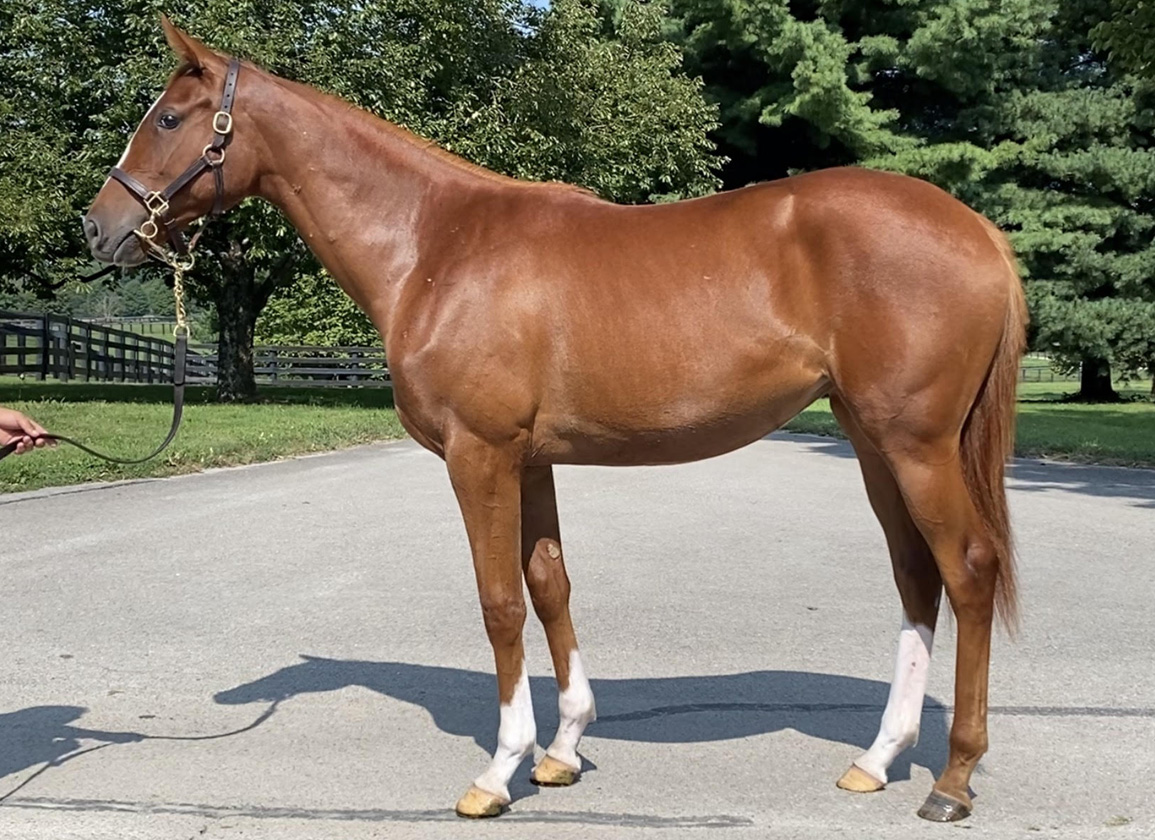 Hip 801, a filly out of Maya Princess, sells with the Mill Ridge consignment at the Keeneland September Sale. | Katie Ritz

This summer, Mill Ridge consigned a filly at the Fasig-Tipton Saratoga Sale that sold for $180,000 to agent Bo Bromagen. The yearling is out of the Street Sense mare Wild Silk, who hails from the family of GISW Joking (Distorted Humor) and MGSW Fed Biz (Giant's Causeway), as well as blue hen mare Yarn (Mr. Prospector).

“She was an outstanding physical,” Bell noted. “She wasn't the biggest filly, but she had such a presence and such an athletic move to her that she really picked up momentum the longer people had to look at her.”

Oscar Performance will be represented by 33 yearlings at the upcoming Keeneland September Sale. Bell said he is especially looking forward to presenting Hip 801, a filly bred on the same cross as their aforementioned star Saratoga yearling. This September-bound youngster is a daughter of Maya Princess (Street Sense), who has already produced the stakes-placed filly Mariah's Princess (Ghostzapper).

“This filly has always had a nice presence about her,” Bell explained. “Physically, she's very smooth and she's a really flashy kind of filly. She's correct and moves with an athletic, cat-like walk. She's light on her feet and she's always willing to do something new. If she's getting on a van or going into a new barn, she is willing to just drop her head and take it in.”

Bell continued in saying that many of the Oscar Performance yearlings at their farm have that same easygoing temperament.

“They all have really great presence of mind and they're confident horses,” he said. “They kind of take a deep breath, take it all in and then go to the task at hand. They have a very nice, laid-back temperament that oozes confidence and class.”

Bell said he has high hopes for Oscar Performance and his yearlings heading into the Keeneland September Sale and is confident that the strong support from breeders in the early days of the Mill Ridge stallion's career will lead to his offspring's success in the auction ring.

“It's an outstanding group [going to Keeneland September] representing a lot of top breeders,” he said. “Two of the last three Eclipse award-winning breeders are shareholders in Oscar Performance in George Strawbridge and John and Tanya Gunther. It's a diverse group of breeders and they've been raised at great farms, so they should be given every chance.”