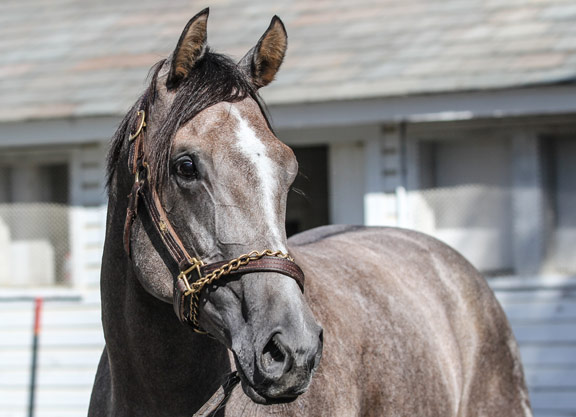 A competitive field of nine sophomore fillies are set to line up in a wide open renewal of Saratoga's GII Prioress S. Sunday. Trainer Linda Rice saddles a filly who is a perfect three-for-three in her young career in Downtown Mama (Speightstown). A debut winner in the mud at Laurel, the $440,000 OBSAPR buy wired a competitive field at Belmont to clear her first-level allowance condition May 27 and bested older rivals last time downstate July 13. The roan won her last two starts on the front end, but showed the ability to rate in her debut, which may serve her well from post eight. Rice, owner Sheila Rosenblum of Lady Sheila Stable and jockey Jose Ortiz know a thing or two about campaigning female sprinters in New York as they are the connections behind champion La Verdad (Yes It's True).

“[The pace] was part of the reason I didn't go to the [GI] Test with her,” Rice told the NYRA notes team. “She's been a little rank in her races and run up close and I was afraid it'd be a recipe for disaster in the Test. I think we've given her a little more time going into this race and, here, it's possible we might be sitting off the pace, we could be on the lead, I'm just going to leave that to Jose Ortiz. He's having a good meet, I'll let him figure it out.”

The morning-line nod goes to St Elias Stable's Nonna Mela (Arch), who does not have a perfect lifetime record, but is two-for-two over this strip. Romping by six lengths in the 6 1/2-furlong GII Adirondack S. here last summer, the Todd Pletcher trainee was subsequently shelved and resurfaced in Belmont's GI Frizette S. in October, where she finished a well-beaten fourth. Sent to the sidelines once again, the dark bay returned in a seven-furlong optional claimer at the Spa Aug. 7, crossing the line a decisive 4 1/2-length winner.

Another runner of interest is Stonestreet Stables' Dawn the Destroyer (Speightstown), trained by Kiaran McLaughlin. The bay splashed home to a three-length score in a sloppy seven-panel allowance over this strip last time July 24 and may encounter a similar surface Sunday given the weather forecast for the Spa.