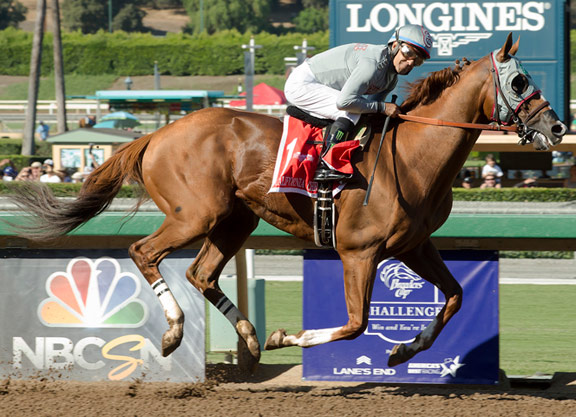 We've heard many times that horse racing needs its star horses, because star horses drive interest in the sport. The wish and want for a Triple Crown winner for years is prime evidence of that. I, like most of you, agree with the supposition in principle. However, I think this wish has many problematic issues and, frankly, even thinking about it is not worth our time.

Something very interesting is happening this fall. The National Football League television ratings are down. Regional telecasts–normally a stalwart in the ratings game–are off 3%, while the national games are getting butchered; off by about 15% on average.

Why? Most of the talk is focused on the loss, or retirement, of star quarterbacks.

In the immediate aftermath of the death of golf legend Arnold Palmer, more than one commentator described Peyton Manning as the closest thing any sport has to golf's now-passed 'King'. Manning is a tremendous pitch man, signs countless autographs, pens hand-written notes to many of those who write him. He was (not coincidentally) quarterbacking on National television more than any quarterback alive, to huge ratings. The NFL leaned on him like a tired construction worker leans on a shovel. He's now retired.

Tom Brady, Peyton's foil in many ways, is suspended. Tony Romo–another prime time ratings darling–is hurt. The prime time match-ups that have taken place this fall are certainly marquee. But when Tom Brady and Peyton Manning are replaced by quarterbacks no one knows, it makes a difference.

The NFL is a league that's married to its stars.

Meanwhile in horse racing, we have had our Peyton Mannings over the years.

We had what was probably the most popular horse since Secretariat–Zenyatta–race 20 times, up to age six. She was on 60 Minutes, ESPN showed her stretch drives live, or near-live on newsbreaks during her win streak. She was everywhere.

In present day, we have California Chrome. Everywhere he races, people watch (and bet) and when Chrome is rumored to be racing, the talk on social media is palpable. If you want handle to move up for your event, if you want to increase chatter about your racetrack, if you want to push ratings, invite Chrome.

But let's examine why we had Zenyatta and Chrome to watch.

Zenyatta was a growthy filly who needed time to mature, and missed most of her 3-year-old season. After she began asserting herself in big races, like her eye-popping win in the Apple Blossom at Oaklawn, she trudged along on the racetrack, because being a mare, her worth was not what a colt could bring off the track.

California Chrome is different, but amazingly similar. He had to earn his stripes on the racetrack. He's been in almost continuous training for years, and he has proven without a doubt he is a wonderful, tough-as-nails racehorse, and represents incredible opportunity in the breeding shed.

California Chrome and Zenyatta were outliers. They were and are a perfect storm of happenstance and serendipity. The chances of two horses like this–horses with the swagger, the following, the ability to do what they did month in and month out at high levels for years–coming along with any regularity are very poor. You can't market something that needs an apple to fall out of a tree, which is why above, I hypothesized it's not even worth thinking about.

The so-called “solutions” some in the sport offer–mandating horses to race past age four–no doubt cause marketing people at dozens of racetracks to salivate. But they're non-starters. They are never going to happen.

I think some in the sport have figured out horse racing's value as a marketing vehicle lies not in equine stars, but in event marketing.

“Big Days” are happening for a reason.

That's fine for the big venues, but what can smaller venues do? For them, my advice is simple: Focus less on attracting a star horse to an event by adding huge money to a purse, or wringing hands over an appearance fee. Instead, focus with every fiber of your being, on the event itself.

I believe there are three big benefits to such a strategy:

i) When your track creates and brands an event, the event feeds itself and breaks new ground with partnerships and new revenue streams. These can be honed and expanded year after year (regardless of what trainer, horse, or riders show up).

ii) Politicians are watching. I have had more than one conversation with political types who saw a successful horse racing event in his or her town or city, where they beamed that their vote for slot money was a smart vote. Slots in some states are a livelihood and it needs to be kept in mind.

iii) In the simulcast world, there is a big opportunity to

introduce your racetrack to bettors

If we need examples of this strategy and its value, there are some.

In little Prince Edward Island (population under 130,000) they link a harness racing event each August with the town fair. Over 25,000 people show up to watch a race for a purse of only $60,000, and horsemen from all over the east coast of Canada and the U.S. ship their horses to be a part of it. This event is a partnership between a city, a racetrack and a provincial (state) government. It's intertwined with tourism, gaming, and sponsorships with private industry. Everyone gets involved to make it special, and special it is. Can your track copy this model?

In Minnesota, over 20,000 fans make it out to Canterbury Park for a couple of cards a summer. Ensuring this small track remains in the eye of Minnesota politicians is crucial, and it's all hands on deck. What are they doing at Canterbury that you can do?

Sponsorships and partnerships are great, but what about a betting product? Woodbine Entertainment garnered the highest handle for a harness racing card in Canada's history at a big event day recently. Over $2 million of the almost $6 million in handle were because of a mandatory payout.

Can your track use marketing money (slots money in many cases) to seed a superfecta pool for your event, creating a negative takeout pool for bettors to take advantage of? If your track has a jackpot bet, what about mandatory payout day on your big day? Instead of adding $200,000 to a purse to attract horses who likely will not move the betting needle, what can $200,000 do added to the betting pools in a creative way?

The National Football league is having television rating issues this fall. For a sport that's married to marketing its stars for viewership and attendance with those stars absent, it's a huge problem.

Racing's sports marketing is not dependent on its stars, because star horses race for seasons, not years. Wishing and hoping that changes, is, in my view, not wise. Racing's on-track attendance and viewership (along with added goodwill to state and city politicos) is dependent on events.

Making events special, incrementally improving them, and being more and more creative to bring people out to the track is important for more than just the event itself–it's good for the long-term health of horse racing.

Dean Towers is a board member of the Horseplayers Association of North America and a director of a Toronto-based digital marketing firm.