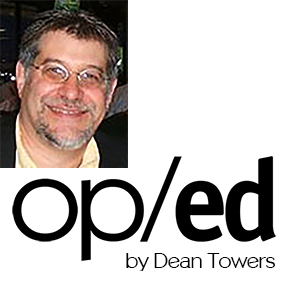 The Final Four goes this weekend in Houston, and after a rip-roaring set of early round games it's sure to be exciting. What might not be quite as exciting this year, however, will be the viewership numbers. According to Brad Tuttle at Time.com, 28.3 million people watched the final last year, but this year nowhere near that will tune in; not because people do not like basketball, or suddenly don't want to watch, but because of reach.

Last season the NCAA decided they were not getting enough money for network coverage and signed a new deal. The Final Four and Championship games would not be on free over the air TV in 2016, they'd now be on TBS, which requires a pay TV package to tune in. This strategy brings in more gross dollars, but the end result is the sport will be watched by fewer fans.

According to some, including Tuttle, this tactic has problems.

“The problem is that such agreements are doing serious damage to fan relationships. And perhaps even worse, they hurt the sport down the road, leaving countless would-be fans in the dust,” he wrote.

When referring to a very similar year-long stalemate currently being resolved to show Los Angeles Dodgers baseball games locally, Jeff Passan of Yahoo Sports says, “This is the consequence of greed, myopia and stubbornness, and no amount of pandering can placate the fans suffering because of it.”

Both authors conclude that for sports which have gone down this road before–pay-per-view boxing in the 1980's being a prime example–long-term viewership (and gross revenue) has been severely hurt.

Perhaps you might think I would dovetail into horse racing and its need to be shown on free television now. Maybe it would be a good column, but I won't be doing that. Unlike the Super Bowl, or NHL hockey, or baseball or the NCAA tournament, racing does not receive even a smattering of its revenues from TV deals. It gets most of its money for purses and profits from wagering. 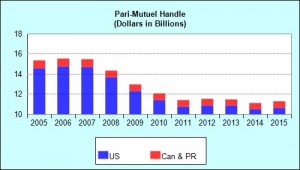 The forwarding of wagering in this sport, through both its price and delivery systems, is the NCAA pay TV deal, pay-per-view, and local baseball rights squabbling, times about a hundred. It's been myopic, solely about there here and now, and frankly, in my view, it is a huge reason why this sport has not seen wagering growth for many years.

In 1957, horse racing enjoyed a near gambling monopoly in the state of California. Do you know what this “monopoly” charged customers in takeout? According to a study called Statistical Report of Operations, commissioned by the California Horse Racing Board, it was 13.75%. In 1977, when lotteries and other forms of competition came online, that rate stood at 16.9%. Today, with poker, and daily fantasy sports and casinos everywhere, the rate is about 21%. Ironically, the same 1989 study warned of squeezing the customer too hard, losing them forever, and recommended lowering takeout to help stem the tide.

Horse racing has been taking more off existing customers, rather than growing them in numbers, long before the NCAA's ever tried.

Price is not the only factor that makes the sport's customers feel under-appreciated, and the means to an end. Although the sport has been handed what can aptly be described as a gift– since 2006 a near monopoly on internet wagering–the customers have seen Scrooge, not Santa.

When a commission or horsemen's group needs money, advance deposit wagering (internet betting) taxes and source market fees have been created. This eats into a customer's bottom line and makes betting on the sport less palatable.

Restrictions on betting over the internet have been enacted in states, like Texas.

Signal fees have been going up and up and up, killing any hope price sensitive bettors have to beat the game via small rebates.

Long term, often-suffering racing customers in 1980 or so would pay $300 for a stock trade by visiting their broker's office–now they pay $4.99 over the internet. How do you think they feel opening up an ADW account and seeing what amounts to the exact opposite happening?

I don't think it has to be this way. With some long-term thinking, and a realization that a customer needs to be cultivated and nurtured (like any gambling customer) things can get better.

Did they do anything differently when compared to racing here? Yes.

If you want to get a bet down in any part of Australia, you can. You can wager–at a fair price with no source market fees, no extra added taxes; from handhelds, or iPads or home computer–without incident.

Has takeout gone up like it has in the U.S.? No, it has not.

Corporate bookies and exchanges have made win betting very lucrative for punters, with low takeout. According to the International Federation of Horse Racing Authorities Annual Report, 89.6% of betting dollars in Australia were returned to punters (as compared to about 78% in the US). 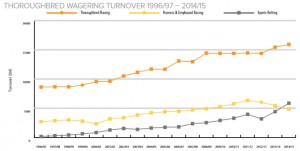 Taking less off a bet has not hurt purses (they're up), and although authorities in Australia are, like here, continually looking for increased margins to squeeze the lemon, often times they find themselves thwarted. Australia's big days, like Melbourne Cup day, continue to introduce new fans to the sport in record numbers.

Australia is not all sunshine and lollipops. But it does possess a system in which customers can place a bet seamlessly and easily, at a fair price. Business in many ways really is that simple, isn't it?

This weekend some of you who are casual fans of basketball may not watch the NCAA Final Four because you can't find it; it is simply not convenient for you. Now, think about how inconvenient it is for horse racing's customers in the U.S.–especially of the new variety–to get a bet down at a fair price. Changing horse racing's pricing, distribution and regulatory betting model, and turning it more towards the customer is, in my opinion, one of the smartest things the sport can do to grow.