Chrome Back for ’18 Pegasus? Why Not? 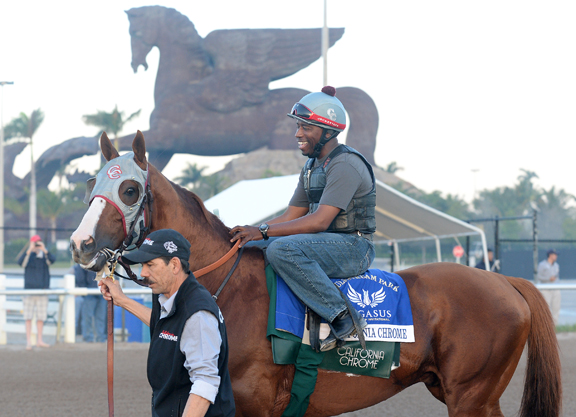 Ask someone in horse racing why things are done a certain way and the answer is usually “because that’s the way it’s always been done.” It’s a terrible answer and speaks to an industry so stuck in the past that it’s afraid to try anything new an innovative. Well, Frank Stronach didn’t just try something different last Saturday with the GI Pegasus World Cup, he turned the entire sport upside down with something so bold and daring that it was one part brilliant, one part crazy. And guess what? It worked.

Now it’s time for breeders and owners to do the same.

Between the GI Breeders’ Cup Classic and the Pegasus World Cup, there will be $17 million in purse money available within an 11-week period and at a time where sires are not busy breeding, that is as long as they don’t go to the Southern Hemisphere. But nobody brings horses back to race after the breeding season. Why? “Because that’s the way it’s always been done.”

Before the Pegasus World Cup came around, there was only so much incentive to bring a horse back after the breeding season. Maybe the $6-million purse in the Breeders’ Cup Classic was not enough. But add the $12 million Pegasus purse and there’s too much money sitting on the table for somebody not to give it a try. What do they have to lose, other than a tradition that, frankly, doesn’t make a lot of sense?

Leave it to the folks at Taylor Made to be ahead of the curve, as they are when it comes to so many aspects of the sport. Taylor Made President and CEO Duncan Taylor told TVG in an interview prior to the Pegasus World Cup that they will examine the possibility of bringing California Chrome (Lucky Pulpit) back for the 2017 Breeders’ Cup-2018 Pegasus double. A prep prior to the Breeders’ Cup might also be in order.

“Yes, we’re thinking about it,” Taylor told the TDN when asked about the possibility of Chrome returning to the races after the breeding season. “You have to do what is right by the horse and consider his temperament, his personality, his fitness. All those things will come into play. I think it’s a real possibility that someone will do it. But it will take a special kind of horse to do it. One with the right personality.”

In other words, there’s no reason not to try it.

California Chrome will be six at next year’s Breeders’ Cup Classic and seven when they run the 2018 Pegasus World Cup. That’s not at all too old to perform at the highest level. If Arrogate (Unbridled’s Song) stays sound, he could have a year for the ages and he’s already the horse to beat in the 2018 Pegasus. Under normal circumstances that would almost certainly be his last race before he goes off to stud. But why wouldn’t he come back to race in the 2019 Pegasus as a 6-year-old or even in 2020 as a 7-year-old?

It’s often been said that once a horse is bred their mind is on one thing and one thing only and they no longer have the focus needed to return to the races. Asked if that were true, Taylor said he had no idea.

The reason no one really knows if a horse can race at a top level after being bred is because there are so few examples to go by. The only U.S. horse in recent memory who has tried it is Bertrando (Skywalker). He was bred in 1994 and returned later that year to win two of six starts, including the GII Goodwood H. He was bred again the following year, made it back for two starts and was unplaced in both.

There will be another test case a little later this year. A top sprinter in Australia named Il Cavallo (Aus) (Choisir {Aus}) was retired following his 2015 campaign, but only managed to get three mares in foal. His connections have gelded him and returned him to the races and he is expected to have first start off the layoff soon.

Though it is a different breed, a Standardbred is still a horse, and in Europe virtually all top male horses breed in the offseason and then return to the races. At times, European trotting sires will actually race against their offspring. Sunday’s Prix d’Amerique in France, one of the biggest trotting races in the world was won by Bold Eagle. His sire is Ready Cash, who did not retire from racing until 2014 at age nine. His first crop was born in 2010.

Perhaps it won’t work and California Chrome, Arrogate or whomever will prove incapable of racing at a top level after being bred. But what if they can? What if some of these superstars can come back after being “retired” for multiple Breeders’ Cups and Pegasus World Cups? Imagine if they tried it this year with American Pharoah (Pioneerof the Nile) and he was in against Chrome and Arrogate? It is absolutely worth a try, and as Stronach has proven, conventional wisdom in this sport is not always, if rarely, a good thing.

PEGASUS PRATTLE — California Chrome lost by 29 1/2 lengths in the Pegasus, so his defeat can’t be blamed solely on the fact he drew the outside post in the field of 12. But, as predicted last week in this space, he was at a severe disadvantage because the of the draw. According to the Trakus chart, California Chrome had to cover 6,082 feet. Arrogate, having drawn the one post, covered 6,026 feet. That 56-foot difference is equivalent to seven lengths. Even if he ran an A plus, plus race, California Chrome was never going to beat Arrogate spotting him a seven-length advantage. Again, if ever raced again at Gulfstream, the Pegasus cannot be a mile-and-an-eighth race.