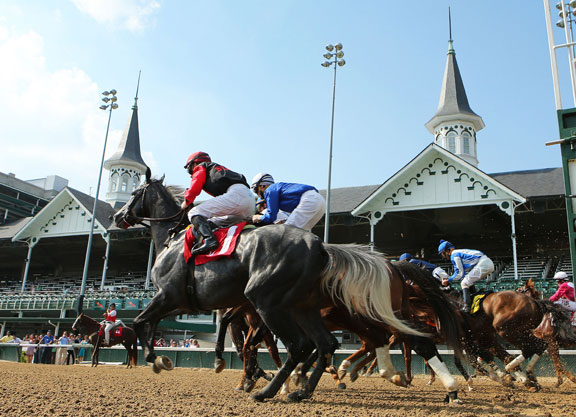 There's never been a horse who earned any money by sitting in his stall all day, but there they sit. The number of average starts made per horse has never been lower, many traditional Breeders' Cup preps fell apart last year because everyone wanted to “train up” to the big day and a place like Aqueduct, which gives away an astronomical amount of money, has the racing office working overtime to cobble together cards with six-horse fields. In 2016, $1.08 billion in purse money was paid out in this country and it sometimes seems that no one wants it.

The definition of insanity is “extreme foolishness or irrationality.” This qualifies.

Everyone knows this is a serious problem for horse racing, one that is choking the betting product with far too many short fields. The conventional wisdom is that the trainers are at fault, that they have adopted a strategy of only running their horses when they are at 100% and in spots where they're no higher in the odds than 5-2 or so. They are culpable, but not as much as their bosses, the owners who let them get away with not running their horses more often. The employee (the trainer) has decided to take the bosses' assets (the horses) and greatly limit their earnings potential by giving the asset a limited opportunity to make money. This would be like the people working the assembly line at the Ford plant deciding to produce half as many cars each year as they could and Ford's CEO signing off on the deal.

Tim Ritvo, the COO of the Stronach Group and a former trainer, has been sent to Santa Anita with orders to improve handle. He knows the easiest way to do that is to increase field size. He's got a lot of good ideas as to how to do that, but he can only do so much if trainers won't run their horses. He, too, is scratching his head, and says the current situation is not about a horse shortage but an owner shortage.

“Yes, the foal crop is way down from what it was 20 years ago, but why is that?” Ritvo said. “There's no demand for horses. You could always go and breed 10,000 extra horses, but who would buy them? It's hard enough to make money in this business, but it's so much harder when your horses run three or four times a year. There are a lot of people who know they can't make money racing horses because the horses don't race enough and have either gotten out of the game or aren't getting into it.”

Ritvo said he believes another area that has to be addressed in order to attract more owners is the cost of maintaining a stable, which he said has to decrease. That's particularly a hot-button issue in New York, where the high costs of workman's compensation stack the deck against owners and trainers.

At any level of the game, it can't be easy for an owner to make money when their horses run four times a year. So, why do owners put up with it? I have never once heard an owner complain that his or her horses don't race enough or gripe when a trainer tries to convince them that it's a good idea to pass a $750,000 Grade I race in which you would be the favorite because the trainer feels more comfortable resting the horse before the Breeders' Cup.

Trainers will tell you that the modern horse can't withstand the rigors of racing, that to run them every three weeks or 15 times a year is just not possible. If there's any truth to that, it would only be because of how long it takes to recover after running while dehydrated and after severe weight loss–the true reason why Lasix is used with what seems like 99.9% of the horses running today. Still, I'm not buying it.

Certainly, there are a number of factors that come into play when it comes to how little horses race today, but the most obvious is that some trainers have become addicted to their winning percentages. It used to be that a trainer would use races to get a horse fit, particularly off a layoff, or run a horse in a race where they had little chance to win to help the racing office, or just take a stab with a 40-1 shot. No more.

Do any of those things and your winning percentage is going to drop. Look up and if you're winning 12% of the time instead of 22%, you're not going to get the owners. Trainers know this. Owners want super trainers and they want trainers that win at a very high percentage. But what makes more sense from an economic standpoint–hiring a trainer that wins 12% of the time but will get 12 starts a year out of your horse or going with the 25% guy who will run the horse three times?

Average field size hit a peak in 1985 when it was 9.03 starters per race, the highest it had been since 1955. That year horses started an average of 8.28 times per year. The average field size in 2016 was 7.59, the smallest since The Jockey Club began compiling figures. While a difference of 1.44 starters per race might not seem like much, it is actually huge when it comes to handle.

The only reason fields have stayed as big as they have is because the number of races run across the country has been cut drastically. In 1985 it was 75,687. In 2016, it was 42,564. One way to increase field size is to further reduce the number of races. A better way is to convince trainers to run their horses more often. If every horse in training ran just one additional race per year and the number of races offered remained the same, the average field size would go from 7.59 to 8.8.

It's not going to happen because owners drank the Kool-Aid. Are they being bamboozled by trainers whose primary concern is their winning percentage? It's something they need to consider. They need to study the economics of horse ownership through a different lens and start demanding their trainers race their horses more often. And if they do, maybe they'll see this isn't working for anybody. Not for the sport. And certainly not for the owners.

Am I missing something? Send me your feedback for publication to [email protected].