Op/Ed: The Stress, Anxiety and Craziness of Haskell 2019: Welcome to Racing’s New Normal 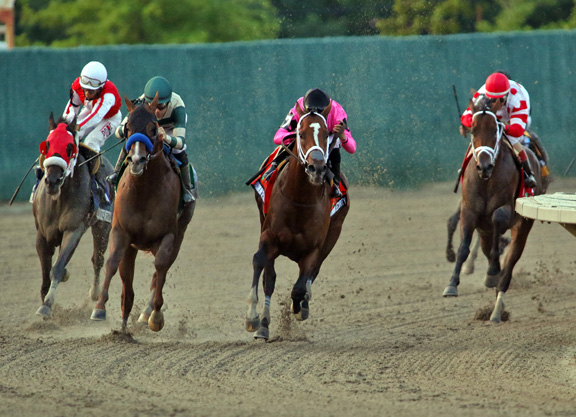 Turning for home in the 2019 Haskell | Equi-Photo

It may or may not have been the hottest Haskell Day ever, but it certainly wasn’t the first time the race had been run amid blistering heat. That’s what happens when you race horses in late July or early August.

It was a pretty rough day when Forty Niner (Mr. Prospector) won the 1988 GI Haskell S. by a nose over Seeking the Gold (Mr. Prospector). According to the charts, it was 94 degrees when the first race began and it likely got hotter as the day went on.

(On Saturday, it was 96 degrees when the first race went off).

But the two degrees in temperature is not what separates those two days. Thirty-one years ago, that it was a very hot day was not an issue. I read as many stories as I could find on the race and not one even mentioned the weather. When the 2019 Haskell was completed, some two hours and 42 minutes after its original post time, Monmouth had somehow navigated through a day that neared crisis proportions, all because it was a hot day.

The first race was delayed by 38 minutes, six races were cancelled and the racetrack sat empty for about four hours before racing continued amid hopes that it would cool down a couple of degrees. When racing resumed a little after 6 p.m., only the stakes races that were left on the card were held. All of this was proceeded by a phone call from New Jersey Governor Phil Murphy to Monmouth’s de facto CEO Dennis Drazin. Murphy had heard from those screaming about the supposed cruelty of asking horses to race under such conditions and he was well aware of the firestorm surrounding the sport. He did not want the headline on the stories written about one of the most important sporting events in his state being all about a horse or two dying in the heat at Monmouth Park.

That bears repeating: a state governor actually got involved in the decision over whether or not a racetrack should or should not hold a scheduled day of racing.

Should Monmouth have cancelled the entire card a few days earlier, like so many other tracks in the East had done? Should they have just kept going after the second race, the last one held before the delay, particularly when you consider the early double went off without a hitch? Did they do the right thing by delaying the card and holding the Haskell while the sun was setting on the Jersey Shore? Considering that no horses broke down during the day and there were no reports of any suffering any severe heat-related problems, arguably Drazin picked the right choice among his many options.

But that was only a footnote when you consider what this day was really all about, that horse racing in 2019, post Santa Anita, is facing a level of scrutiny far beyond anything it has ever faced before. And it cannot afford to make any mistakes.

“Five years ago, if we had this heat, nobody would have said a word or asked us to cancel and we wouldn’t have canceled,” Drazin said. “But now, because of what happened at Santa Anita, there is heightened attention when it comes to people paying attention to horse racing. Look at that Real Sports show they had on HBO with Bryant Gumbel. Look at everything that PETA keeps saying and doing. It’s a big issue with the public that has all of us concerned because we want to protect the industry. Do I think PETA, in and of itself, can take the industry down? No. But people need to be sensitive to doing the right things.”

If you look at things that way, maybe the animal rights activists have done racing a favor. Way back in 1988, was it the right thing to do to hold the Haskell card on such a hot day and not come up with some sort of outside-the-box plan like Monmouth did this year? And what about the 1991 Monmouth Oaks, where the temperature was 95? On the same day, they ran a $500,000 race at Rockingham Park called the New England Classic. A wire service report of the race noted that it was 100 degrees with “high humidity.” I know. I was at Rockingham that day and, looking back, they never should have run.

Though it’s very difficult to know where to draw the lines and what issues are real and what are not, the industry, as Drazin said, does need to be sensitive to doing the right things. Take that approach and nothing bad can come from that.

Things were a lot easier for horse racing on that sweltering day when Forty Niner nosed out Seeking the Gold in the Haskell. People may long for a time when you could run a race on a hot day and not have protestors, calls from a governor and media there more interested in whether or not there would be a calamity than the story of who won the Haskell. But those days are long gone and they are never coming back.

Fate was on Monmouth’s side Saturday as management tried its best to make decisions based on the best interests of the horses while also realizing the tremendous pressures that came with the possibility of something going terribly wrong on the racetrack. They took a risk by running, one I would not have taken if the call were left up to me. But in the end, it all worked out fine.

Still, with everything that went on, it was a tough day for the sport. You don’t have to like it. But you had better get used to it.