Home » Archive » Shared News » Op/Ed: Guild Members: You Should Not Be Proud

Op/Ed: Guild Members: You Should Not Be Proud 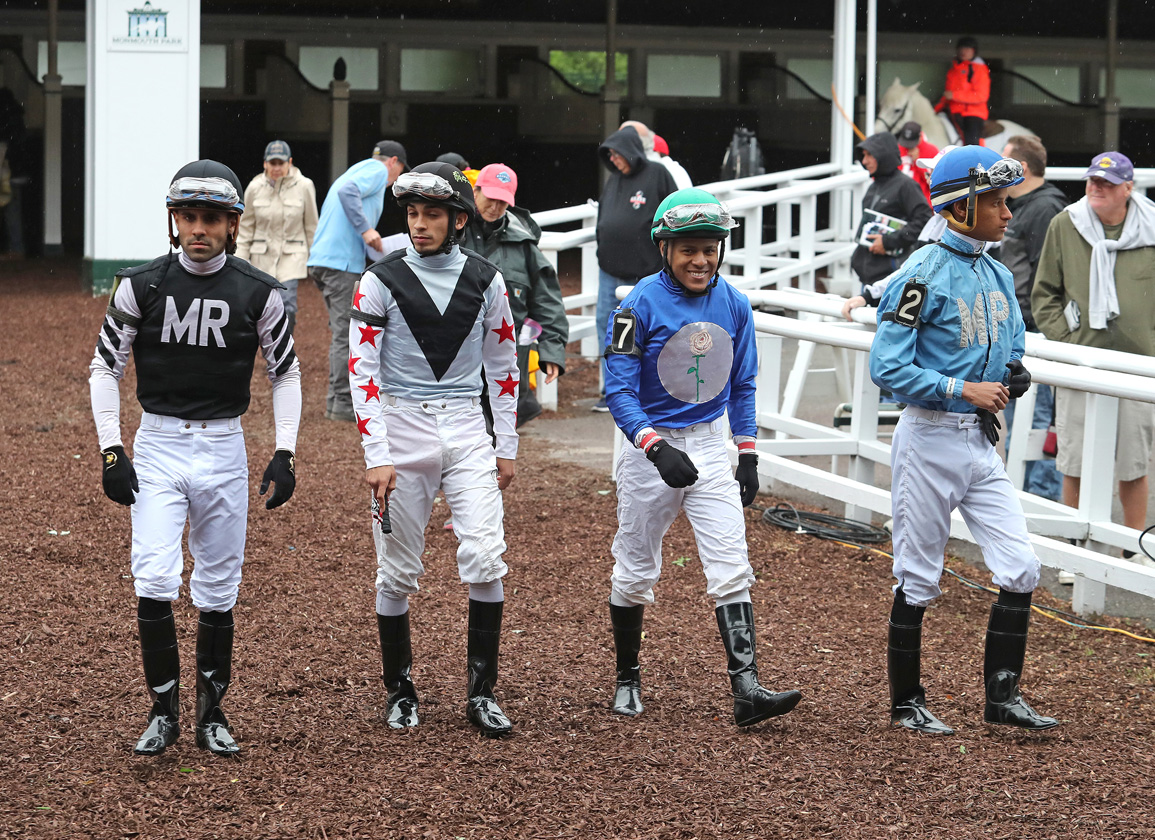 Riders last month at Monmouth Park with no whips | Equi-Photo

Perhaps no collection of companies makes decisions based more on hard data, charts, statistics and actuarial tables then those that make up the insurance industry.

Middle-aged drivers pay lower premiums than do those a generation or two younger.

Those driving in Los Angeles traffic pay more than those who live in rural areas of the country.

Apply for a term policy and the insurance company can list your premiums for the rest of your life. They know what the statistics show, based on your place of residence, family history, gender, age, health condition, etc.

Interested in long-term health care? Be ready for a question asking if you participate in such activities as bungee jumping, sky diving and/or, my favorite–heli skiing, which for the uninformed is off-trail, downhill skiing or snowboarding reached by helicopter instead of a ski lift.

One thing probably even riskier than heli skiing is being a Thoroughbred jockey. Every time a jockey gets a leg up on a mount, he or she knows the inherent risk involved in the vocation they have chosen.

Imagine being a jockey and speaking with an insurance agent about binding health or long-term coverage.

Which is why for years, members of the Jockeys' Guild have been provided access to policies for life insurance, temporary disability and accident, death and disability.

Yet, as reported by Bill Finley in the June 15 TDN, the Guild recently informed its members currently riding at Monmouth Park they would no longer be covered by the organization's policies.

Monmouth, as has been widely reported, is the first track, because of a directive from its state racing commission, whose jockey colony may carry a whip but not encourage its mounts with the stick.

As Finley noted, Guild management says it believes races at the New Jersey track are more dangerous with the new policy in effect.

“The increase of risk is thereby creating a greater exposure for the Jockeys' Guild and the benefits that we provide to our members who are riding under such regulation,” Guild president and CEO Terry Meyocks said in a letter sent to members.

Frankly, that is a bunch of crap. Bull crap, not horse crap.

The Guild has not seen the policy rates increase, nor has it been informed the rates will go up because of the new rule at Monmouth Park.

The track is only a few weeks into the meeting, as yet with no apparent increased risk to jockeys.

When respected trainer Jerry Hollendorfer was ridiculously singled out in California a few years ago for having a higher incidence of breakdowns, could the Guild have said any jockey who rides the horses he trains (at any track) would not be covered?

According to Meyocks' quote, riding those horses would cause an “increase of risk” and therefore “greater exposure for the Jockeys' Guild.”

Suppose over time we find a greater incidence of accidents in races where Lasix is not allowed. Would the Guild cover a rider should he be injured in an allowance race but not in a graded stakes–at the same track on the same day?

What if New Jersey is just the first state to enact regulations saying riders can carry a crop but not use it except in cases of extreme emergent circumstances?

Jockeys and their agents must constantly decide at which tracks they will accept mounts. Some riders, unhappy with the new policy at Monmouth, have elected not to spend their summer at the track. Others have accepted mounts and ridden without incident.

The Jockeys' Guild may certainly take a hard stance on its belief the riding crop aids riders and keeps them safer. But by playing politics the organization is forcing members riding at Monmouth to either bind their own coverage or ride without it.

Often the Guild steps in to lobby on behalf of members riding at a specific track or in a certain state.

In this case, however, the Guild is turning its back on members that have consciously decided to ply their trade at Monmouth Park.

At the conclusion of the Monmouth meeting, should the Guild's insurance carrier raise its rates based on “evidence” of an increased risk to jockeys, there may be reason for the organization to consider a discussion with its members.

It goes without saying that jockeys require insurance and the Guild's binding of coverage for members is an important, if not the most important, benefit of membership.

But if you are a jockey riding at Monmouth Park, we don't know yet if you are at an increased risk. Well not from the commission's policy. You are, however, from your brethren at the Guild.

Ride they say, but we won't cover your ass. We don't have your back.

If the Jockeys' Guild wants to file injunctions and/or lawsuits, testify before committees, threaten boycotts–go ahead. But pulling the rug out from members at Monmouth Park? Well on the litmus test for class, it doesn't go any lower.

If you are a jockey riding in another state, and a member of the Guild, are you proud of how your organization is treating the Monmouth jocks?