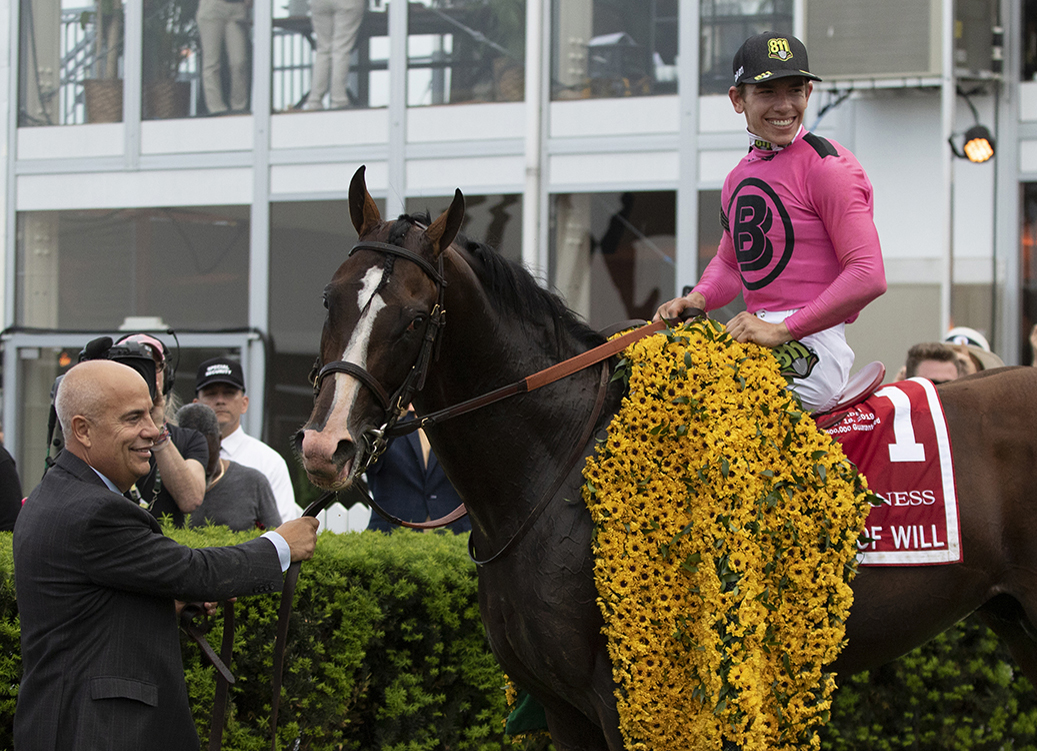 Casse, Gaffalione & War of Will | Horsephotos

When the horses crossed the wire in the GI Kentucky Derby, trainer Mark Casse, owner Gary Barber and jockey Tyler Gaffalione knew they had been the victim of bad luck. War of Will (War Front) lost all chance when Maximum Security (New Year's Day) crashed into him. He wound up crossing the wire eighth.

In the immediate aftermath of the race, Casse, Barber and Gaffalione probably figured this would be a situation where they could simply move on, regroup and hope for a better result next time with their colt.

They couldn't have known that they'd find themselves in the middle of a circus. Controversy. Lawsuits. A media firestorm. A $20-million challenge race that will never happen. Accusations that their horse, who was mugged in the Derby, was actually the mugger.

Gary West, the owner of Maximum Security, who crossed the wire first in the Derby only to be disqualified for bothering War of Will, was understandably upset that racing's greatest prize was snatched away from him. But he just couldn't let it go, with the situation hitting its most bizarre moment when West somehow came up with the theory that it was War of Will who caused all the problems in the Derby and not Maximum Security. Never mind that the Churchill Downs stewards unanimously agreed that Maximum Security prompted the collision and every photo and video tape out there conclusively backed up their opinion.

Barber chose to stick up for his horse, issuing a statement that read, in part: “It has recently been brought to my attention that Mr. Gary West stated on Fox News that my horse War of Will caused the infraction in the Derby. I categorically deny this false accusation. The video evidence irrefutably shows that his horse, Maximum Security, caused a major infraction that almost led to a catastrophe and in doing so, denied my horse and others of a better placing.”

It was a reasonable reaction to an unreasonable accusation.

Casse never took any of the bait. He just kept repeating how fortunate he felt that War of Will was not seriously hurt and that the Derby pileup didn't cause a calamity on the racetrack, the last thing the sport needed after all that had gone wrong at Santa Anita.

For his part, Gaffalione kept his mouth shut and went back to work.

West and his trainer, Jason Servis, chose to sit out the GI Preakness. But the War of Will team didn't. They wanted to give their a horse a chance to show what he could do if able to run a trouble-free race. Now we know what he's capable of: winning a Classic.

This time, it was a cleanly run race and the best horse won. Getting a perfect ground-saving trip under Gaffalione, War of Will spurted through a hole on the rail near the top of the stretch, pulled ahead of the rest and hung on to outlast longshot Everfast (Take Charge Indy). The 144th Preakness was theirs.

Barber, the former chairman and CEO of Metro-Goldwyn-Mayer, was not at the race as he was attending the Cannes Film Festival in France. So it was left to Casse to do the talking for the team and the horse. He had every right to crow or gloat or tell West that his momma wears army boots. Instead, he once again chose the high road.

“It wasn't about revenge,” he said. “I didn't feel he got his shot in the Derby. Any trainer, when they take their horse anywhere, it doesn't matter what kind of race, you just want them to have a fair chance. You want them to show their true ability and he never got that.”

When asked how he reacted to the brouhaha, he replied: “I was fine. I was absolutely fine because I thought I was lucky. I thought I was the luckiest guy. The only thing luckier was horse racing because we were this close to never seeing him again.”

War of Will finished 4 1/4 lengths behind Maximum Security in the Derby and I wrote that I didn't believe the foul cost him the race. He would have been beaten by fewer lengths and might have been third or even second. Now the War of Will team has earned the right to argue that point.

Horse for horse, I'd still take Maximum Security. The field he faced in the Derby was far superior to the one War of Will beat in the Preakness. But if the stars align, the two will meet again. Casse said War of Will will likely run in the GI Belmont. Neither West nor Servis had said much of anything about where they will run their horse next, other than to say the GI Haskell at their home track, Monmouth Park, is a goal. It looks like they are the two best 3-year-olds out there and, considering all that has transpired from Derby Day to the present, it would be fascinating to see them meet up and meet up in a cleanly run race.

But on the third Saturday in May, the day, the story, the race all belonged to War of Will. Casse said the win wasn't about redemption, but it was. They proved just how good their horse is and that sometimes nice guys do finish first.