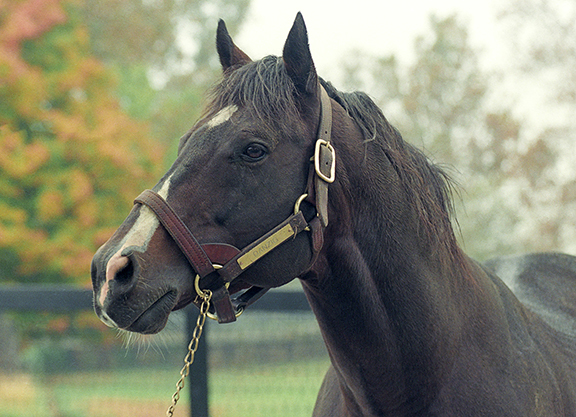 Horse breeding is a science of sorts, or more specifically a series of science experiments. In every stud farm there are categories of 'scientists': the careful technician, the white lab coats and protective goggle-wearers that use tried and tested formulas, with slight variations, to create newer versions of successful models; career professionals who have done their homework and work with what works for good reason.

Then there are the creative geniuses/mad scientists that test the limits and push beyond, creating new theories that only see the light of day if successful–who knows what monsters lurks behind some stable doors.

Then there are the renegades, chucking together whatever is at hand and seeing what comes out the other end. Who is to say which way is right? Only the horses, when they finally reach the track, can decide.

But whatever your type, there is one type that mixes well with all, the breeding equivalent of O negative, the universal donor: Danzig. Born on Feb. 12, he was sold to Polish owner Henryk de Kwiatkowskia for $310,000 at the Saratoga yearling sales and named Danzig after the port city on the Baltic coast of Poland. His first crop, debuting in 1984 and counting the Grade I winners Chief's Crown and Qualify amongst it, made him champion first-season sire and champion juvenile sire–titles he continued to build on in subsequent years, siring 200 stakes winners and ranking in the top 10 eight times, including leading the general sires' table for three consecutive years in 1991, 1992 and 1993, as well as making it three times onto the top 10 broodmare sires' list.

Danzig was, in the beginning, an unlikely candidate to be such a compatible companion. The universal donor must, after all, offer the unique power of helping those in need, while providing the lowest possible risk of serious negative reactions. Brilliant but brittle, he showed signs of excellence winning his only three lifetime starts impressively. He raced just once at two years over 5 1/2 furlongs and twice at three, never further than 7 1/2 furlongs and never in any black-type races. Danzig stood at 15.3 hands, diminutive by American standards, and had a slight lightness of bone and off-set knees. It was his trainer Woody Stephens's faith in his young athlete's untapped ability that persuaded Seth Hancock to stand him at his Claiborne base-a decision that would elevate a good racehorse into one of the greatest stallions in the modern era, allowing him to stand in the Thoroughbred pantheon alongside his own sire Northern Dancer and propelling one of the most prolific lineages to even loftier heights and global dominance.

Whatever the continent, the Danzig line has the qualities needed to make a successful stallion or broodmare, passing on speed, precociousness and ability in abundance, factors that have enhanced and contributed so greatly to the Thoroughbred gene pool throughout the world. In Europe the likes of Danehill, Green Desert and Anabaa have cemented his dominance. Equally in America it is War Front, War Chant, Chief's Crown, Langfuhr, Belong to Me, Exchange Rate and Hard Spun. In Australia, where their modern racehorse has been built on the very foundation that is Danzig, through his son Danehill and grandsons, his legacy has been assured by the likes of Danzero (Aus), Commands (Aus), Fastnet Rock (Aus) and Redoute's Choice (Aus), through to Snitzel (Aus) and the leading sire I Am Invincible (Aus), a great-grandson of Green Desert.

Travel the globe and look through any stallion book from A-Z and one would be hard-pressed not to find a successful nick with the dazzling Danzig blood, in many cases too numerous to mention, on both paternal and maternal lines. He blends well with all bloodlines from Ahonoora (GB) to Mr Prospector, Storm Cat, Darshaan (GB), Royal Applause (GB), Sunday Silence, Pivotal (GB), Dubawi (Ire) and Galileo (Ire), not to mention inbreeding with his own rich dynasty. On and on through the list you will discover that everything mixes with Danzig. Name the bloodline and you'll discover that Danzig is its universal donor.

Fourteen years after his death on Jan. 3, 2006, Danzig still stands as one of the most potent bloodlines in the studbook, his distinctive characteristics having carried down through the generations; the dominant bay gene, making him incapable of producing a chestnut, has passed on to many of his progeny, along with his irregular knees which he gifted with irritating regularity. But it was the traits of talent, pace and precocity that he distributed with such consistency that allowed him to adapt so readily the world over.