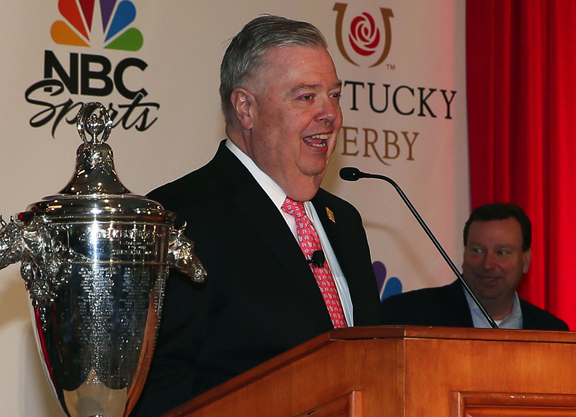 Nearly 35 years ago, as a young Kentucky-bred journalist fascinated with the Thoroughbred industry, I thought I knew a bit about the world's most famous horse race.

Then I met Jim Bolus and John Asher.

They were a pair of walking Kentucky Derby encyclopedias, able to recall with little effort every fact, figure, nuance, story, tale and myth surrounding the race.

To be in their presence was awe-inspiring; to become friends with both was life impressionable.

Jim, a noted turf writer and “unofficial” Derby historian, had a heart attack and died while jogging in May 1997. He was 54. That same year, John, a five-time Eclipse-Award winning broadcast journalist, joined the staff at Churchill Downs.

John died Monday while on vacation in Florida at age 62.

As much as John knew about the Derby, it was something else about him that really impressed me: He wanted everyone to love the Derby as much as he did. And if that meant speaking to a group at midnight while standing on his head, well, I believe John would have done it.

As director of communications for Churchill, John simply felt it was his duty to spread the word about the Derby. And he was the perfect guy for the job.

Affable, lovable and outgoing, while possessing a great radio voice that mesmerized his audience every time. Easy going, funny and unpretentious, while able to enthrall and captivate every group, from school kids to senior citizens.

John could speak about the Derby with ease to insiders and those who wouldn't know a horse if it was standing beside them.

That was the quality that made John so special and unique. He was so comfortable among both the insiders and the outsiders.

Part of his job–perhaps the part he enjoyed the most–was spending time on the backside with owners, trainers, breeders, jockeys, grooms, hotwalkers, vets, etc. Part of his job was dealing with the media, both those like myself, from trade organizations, and those from non-mainstream sports publications. And then, of course, part of his job was being the public face of the company.

My contact, obviously, was as a member of the media. Interestingly, John had a big impact on me in that regard. Nothing to do with writing or editing, but in helping me understand the larger picture outside my sheltered world of reporting to those who already knew the industry.

One Derby week John asked if I would be kind enough to appear live from the backside one morning on two national television shows whose audiences would mostly be comprised of people who knew nothing about horse racing or the Derby.

That afternoon, John asked how the interviews had gone. “Seemed fine,” I said, “but no clue why those shows wanted someone to talk about the Derby.”

“What did you think about last year's Derby broadcast?” John shot back.

“You know what I always say John,” I replied. “More fluff than I need.”

And that was his point.

As someone who wrote for an industry trade, I was all about reporting to that group. John's job was not just about the insiders, but the outsiders as well.

And it is hard to imagine anyone better at it than John.

As an aside, a few years ago, my youngest son, Ben, was attending Western Kentucky University. There he met, and became close friends with Erin Asher, one of John and Dee's three children.

It gave John (who was a proud WKU alum) and I an even closer connection, something we discussed many times, including at a party our kids threw together following their graduation ceremony.

Of course, even that day, as we both burst with pride, our conversation invariably turned to horses, the industry, and the Derby.

While watching last year's Derby, I thought about Bill Nack, the former Sports Illustrated writer and Blood-Horse contributor who had passed away just a few weeks prior to the race. He was another person who possessed a wealth of Derby knowledge.

This year, when they play My Old Kentucky Home, I will think of John Asher, a cherished friend and the person who made me see the Derby in a different light.

I expect there will be people tuning in who would have never witnessed a Derby had it not been for John.

Journalist Tim Layden (Sports Illustrated): “It's incredibly sad that John Asher is gone. He was as cheerful and kind and upbeat as anyone I've been around in four decades as a journalist. A good, sweet man and with a radio baritone you could never un-hear.”

Track Announcer Travis Stone: “I will never forget one particular time John Asher called me: It was a cold, rainy December evening. I was in New York City changing trains. He said, 'How do you feel about moving to Kentucky?' From a personal and career perspective, a more significant phone call I will never receive. Perhaps it's selfish of me to say this now, but I hope I shared with him how much that call and his subsequent visits, texts and calls helped me to feel welcome not only at Churchill Downs, but Louisville as well. If not, his passing reminds me of my responsibility to do the same for others.”

Trainer Chuck Simon: “John was just a great person. When I first started training in Kentucky I didn't know that many people and used to hang out with (late track announcer) Luke Kruytbosch who was my friend from Arizona. Back then, Luke was stationed near the old Press Box and Gold Room for the big players and John was always around. He always took the time to come over and talk to me every time he saw me and ask how my horses were and if I had anything that he could include in a press release–knowing that free press is a godsend for a new trainer starting out. He barely knew me yet he was trying to help me out. Few people I ever met were as naturally kind as John Asher was.”

Hall of Fame jockey Pat Day: “John was a great guy–a sweet, sweet guy and dear friend. He helped me out a number of different times and situations. He was always affable and always upbeat and always a joy to be around. If you ever had any questions about the Kentucky Derby, you'd call John. He was a walking encyclopedia. What a great guy. It really took the wind out of my sails.”

Louisville Mayor Greg Fischer: “So heartbroken. The world knows John Asher as the voice of Thoroughbred racing and its No. 1 fan–and he was the best. I also know him as a strong community leader fighting for those who have little. I will so miss his presence at Churchill Downs and the streets and boardrooms of Louisville where his total humanity shone like a brilliant first Saturday in May. Rest in peace, brother.”

U.S. Senate Majority Leader Mitch McConnell (R-KY): “As a legendary voice in Kentucky's Thoroughbred racing community, I got to know John during my many visits to Churchill Downs. His enthusiasm and knowledge of the storied race track and the Kentucky Derby was impressive. Elaine and I send our condolences to his wife, Dee, and his family, and to all of those who knew and loved him. John will be sorely missed.”