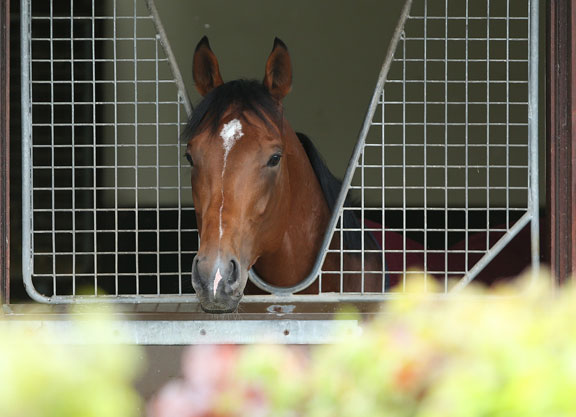 Only a couple of weeks now to the St Leger, truly part of the Turf's family silver. It will do well, mind, to match the 2017 running. Let's hope Capri (Ire) (Galileo {Ire}) can soon get back on track and remind us how he was too good for Crystal Ocean (Sea The Stars {Ire}), Stradivarius (Ire) (Sea The Stars {Ire}), Rekindling (High Chaparral {Ire}) et al.

Whatever has been ailing him, in particular, it's been a tough summer at Ballydoyle. A lot of water has passed under the bridge, certainly, since his stablemate Saxon Warrior (Jpn) (Deep Impact {Ire}) won the G1 2000 Guineas. Most of us, back then, were pretty optimistic that Saxon Warrior might now be heading to Doncaster to make it a Triple Crown year both sides of the Atlantic.

As it is, Saxon Warrior was evidently among those hit hardest by the yard's problems. Aidan O'Brien sounds happy enough that his latest performance, at York last week, will bring him on again. The trainer will pardon those of us on the outside, however, if a fourth consecutive defeat makes Saxon Warrior seem a slightly more specific enigma.

Many are urging a return to a mile, perceived as a bare minimum when Saxon Warrior won the Guineas. But to square up in the G1 Eclipse S. to a horse as good as Roaring Lion (Kitten's Joy) has become, over a stiff track and just a week after that searching race in the Irish Derby, makes it hard to believe that Saxon Warrior has much of an issue with 10 furlongs.

Actually, I always feel people tend to be too prescriptive about distances. A lot of variables–surface, pace, track, tactics, fitness, maturity–go into the impression a horse gives, from one day to the next, of his optimal trip.

But we tend to be still more culpably prescriptive in terms of an animal's ability to handle either turf or dirt. Race distance is a spectrum, allowing marginal and continuous shifts one way or another. But for a top-class European turf horse to run on dirt generally requires a long-haul flight. If such a gamble is even considered, it will typically be only at the end of a long season at the Breeders' Cup–and there has been a deplorable tendency, in recent years, not even to consider that.

I have complained about this trend before, and will doubtless do so again, so let's just stick to the merits or otherwise of this particular case. Because Saxon Warrior, happily, represents the one major European outfit that reliably grasps the two huge incentives that elude so many others. One is that the potential rewards vastly outweigh the minimal damage to a stallion's reputation, if beaten when rolling the dice on dirt. The other is that horses are far more versatile, so far as racing surface is concerned, than we tend to allow.

I won't reprise more than one, albeit a favourite, of the countless examples. Because what a horse like Sheikh Albadou (Green Desert) shows–as a GI Breeders' Cup Sprint winner out of a half-sister to winners of the G2 Yorkshire Cup and G1 Ascot Gold Cup–is that an animal's make and motion are more important, when it comes to handling dirt, than his family tree.

And when I look at Saxon Warrior, whose physical capacities have long been identified as exceptional at Ballydoyle, I see a naval gun, not a cutlass.

In the Guineas, and indeed in beating Roaring Lion as a juvenile, he carried rather than altered his speed. He is fast, all right: a Classic miler after all. And he has never looked a horse who needs to regroup off the bridle, to fill his lungs and let the stamina kick in. But nor does he have nimble, slick acceleration, or an especially extravagant reach. Instead he looks like a heavyweight boxer who can flatten any opponent, provided he can pin them on the ropes. It's just that the odd one or two, a little lighter on their feet, have been able to give him the slip.

In other words, he looks a horse worth a shot on the dirt. Yes, he's out of a Galileo mare. But he is also a grandson of Sunday Silence.

It's worth reiterating the extremes balanced in the pedigree of Saxon Warrior's sire. Deep Impact's maternal family is undiluted turf, and that surface has also been favoured by his best stock–

albeit few tend to be given much choice in the matter. But Sunday Silence's sire Halo was out of a half-sister to the dam of Northern Dancer, who himself appears in each of the other three “quarters” of Saxon Warrior's family tree.

Northern Dancer, of course, is the ultimate “crossover” paragon. In Europe, purely as a result of opportunity, his line has come to be perceived as turf oriented. But it was fascinating to hear MV Magnier invoke the stallion who essentially founded the family firm when buying a yearling by its freshman sire American Pharoah (Pioneerof the Nile) at Arqana's August Sale.

And by dint of its willingness to experiment–not to mention its need for outcross blood–the same firm has shown the rest of the world the transferability of Scat Daddy (Johannesburg) and, at one remove, War Front (Danzig) too.

Deep Impact, for his part, seemed on the brink of a revolutionary impact when Saxon Warrior's Guineas success was promptly followed up by Study Of Man in the G1 Prix du Jockey-Club. But the latter was turned over at Deauville last time, while the filly September (Ire) (Deep Impact {Jpn}) has so far been confined to a single, dispiriting start at three.

In the meantime, Europe has instead pondered an alternative source of fresh blood in the sire of Roaring Lion. For the fact that David Redvers was able to bring this colt back for $160,000 should wake up more parochial investors not only to untapped European potential in Kitten's Joy (sire of two Eclipse S. winners in three years) but also the overall value available to those enterprising enough to spend Leger week at Keeneland.

Kitten's Joy has admittedly established himself as a turf influence, much like his sire and grandsire. But Medaglia d'Oro is also a son of El Prado (Sadler's Wells). Aptitude for a surface depends on a genetic flux expressed, not in mere statistics, but in physiological detail.

Saxon Warrior's owners will presumably persevere towards the Classic with Mendelssohn (Scat Daddy), though ultimately put in his place by the only other horse sharing the benefits of a speed-favouring Travers. Because he, too, may improve for his first run since a disappointment and a break. But it's not as though a helter-skelter mile against Alpha Centauri (Ire) (Mastercraftsman {Ire}) and company would, at this stage, look a particularly viable Breeders' Cup target for Saxon Warrior.

O'Brien is talking about the G1 Qipco Irish Champion S. for Saxon Warrior, and then possibly a drop to a mile. And the last thing he or his patrons need is advice from anyone else. But it might just be worth throwing into the mix the last two Win-And-You're-In options for the Classic: the GI Jockey Club Gold Cup and the GI Awesome Again S. Because Saxon Warrior, right now, still looks an enigma that might call for a more fundamental variation.

This story was posted in Shared News Europe, Today's Edition.