Op/Ed: A Critical Step Forward for the Sport 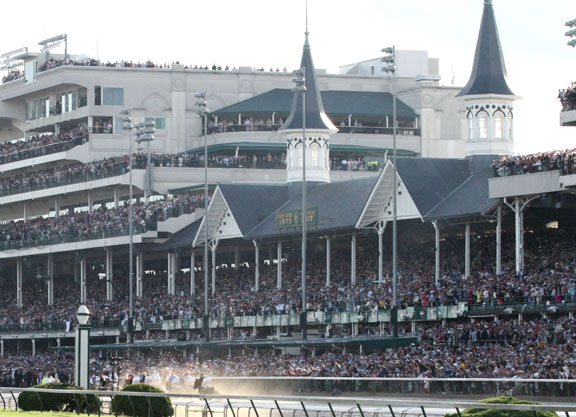 When 27 individuals were indicted in March by federal authorities for their alleged involvement in a wide-spread doping scheme the story was about more than Jason Servis or Jorge Navarro or the cocktails of performance-enhancing drugs they were charged with using on their horses. It was about a system that was so hopelessly broken and incapable of effectively policing the sport that it took the federal government to come in and do what racing had continually failed to do–take meaningful steps to clean up the game.

There had to be a better way.

Monday, Senate Majority Leader Mitch McConnell, surrounded by industry leaders and Congressman Andy Barr, provided just that. The McConnell bill, the Horseracing Integrity and Safety Act, may not be perfect, but is a vast improvement on what we have now. Passage of the bill would mean the dismantling of a system that involves 38 racing commissions, 38 sets of rules and a long history of getting nothing done and replace it with something that promises to combat the sport's real problems.

“As I have said many times, this legislative effort is not about more regulation it is about creating a single nationwide set of rules that will result in smarter, more effective and streamlined regulation for the industry,” said Barr, whose district includes Lexington.

It was ironic that McConnell is now the white knight who has come in to save the sport from itself after it was long felt that he was the primary reason previous legislation, the Horseracing Integrity Act, seemed destined to go nowhere. The story was that Churchill Downs Inc. (CDI) didn't want that bill passed and McConnell had promised them to stand in its way. Yet, CDI CEO Bill Carstanjen was among those who spoke out at Keeneland Monday in favor of McConnell's initiative.

It's unclear why there was an apparent change of heart somewhere, but it doesn't really matter. With McConnell behind what is bipartisan legislation and with Barr taking up the cause in the House of Representatives, this bill is likely to sail through. For that to happen would mark major, long overdue and very necessary change for an industry where nothing substantive ever seems to get accomplished.

But it is the ugly issue of doping that this initiative holds the greatest promise. Servis, Navarro and others may be headed to prison and will likely never train a race horse again, but everyone knows that there are many bad apples still out there and that the FBI and Department of Justice will soon move on from horse racing and leave the job of regulating the sport to the racing commissions and the labs that never seem to catch anybody.

McConnell noted that he was  moved to act after the Washington Post reacted to the indictments by running an editorial calling for the sport to be abolished. He understood the power of those words.

“When I saw in the Washington Post, of all places, an editorial saying Thoroughbred horse racing should be abolished, I gasped,” McConnell said. “When I got past the initial shock of it, I thought it might be a good time to talk to all the various players and see one more time if it were possible for all of us to get together.”

Under the Horseracing Integrity and Safety Act, the job of catching the bad guys will be turned over to the United States Anti-Doping Agency (USADA). Having, among other things, brought down Lance Armstrong, USADA has an impressive record of policing the sports that have called on the agency. USADA not only has a will to clean up the sport, it has more tools at its disposal than a state racing commission could ever have and promises to dramatically increase the number of out-of-competition tests that will be performed.

After the indictments were announced in March, USADA CEO Travis Tygart repeated what has become a familiar argument.

“With the horse racing industry at a crossroads, the right thing to do is to remove the fox from guarding the henhouse and ensure there is an independent anti-doping body in place to protect the integrity of the sport and the safety of the horses,” he said in a statement.

Monday's announcement left many questions unanswered, most notably who will pay for the costs, which include USADA, that passage of the bill will involve. For now, we have to trust that racing's stewards will be able to figure that out. And the sport still awaits an answer on whether or not this legislation might mean a complete ban of Lasix.

So far as the bigger picture goes, those are not major issues. This is about tearing down a system that has failed miserably and replacing it with something that promises to take the sport in another direction. Racing will never be perfect. Horses will always break down and have to be euthanized and you are never going to stop people from cheating. But racing can and must do better. Passage of the Horseracing Integrity and Safety Act is its best chance to do just that.