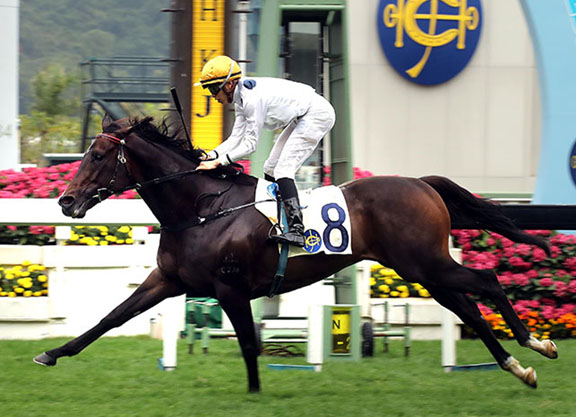 The mount of leading homegrown rider Vincent Ho, Golden Sixty took up a spot in the latter third of the field as Ka Ying Star (GB) (Cityscape {GB}) galloped them along up front as is his wont. Quietly ridden into the final 600 metres, Golden Sixty was held together nearing the lane, edged his way into the clear and put the race to bed nicely with a stinging late turn of speed. Fat Turtle (Aus) (Smart Missile {Aus}) ran on for second ahead of Champion's Way (Aus) (Hinchinbrook {Aus}), who turned in an improved effort in a Classic Mile prep.

“The mile will definitely be in his scope, he's ready,” Ho told the HKJC's David Morgan. “He travelled beautifully, he wasn't pulling–he was genuine. When I pulled him out he showed a great turn-of-foot and won easily. He tries extremely hard, it's been a case of getting his mind right; he's still a bit hot, a bit toey, but he's more relaxed in his races now.”

Winning trainer Francis Lui also has the progressive More Than This (GB) (Dutch Art {GB})–undefeated in three runs this season–heading towards the Classic Mile.

Golden Sixty is the 138th worldwide black-type winner and 73rd group/graded winner for Medaglia d'Oro and is the now 21-year-old stallion's first stakes winner in Hong Kong. An A$120,000 purchase out of the 2017 Magic Millions Gold Coast Yearling Sale, the bay made for a solid pinhook when fetching NZ$300,000 at New Zealand Bloodstock's Ready To Run Sale 10 months later after breezing up 200 metres in :10.48 (video).