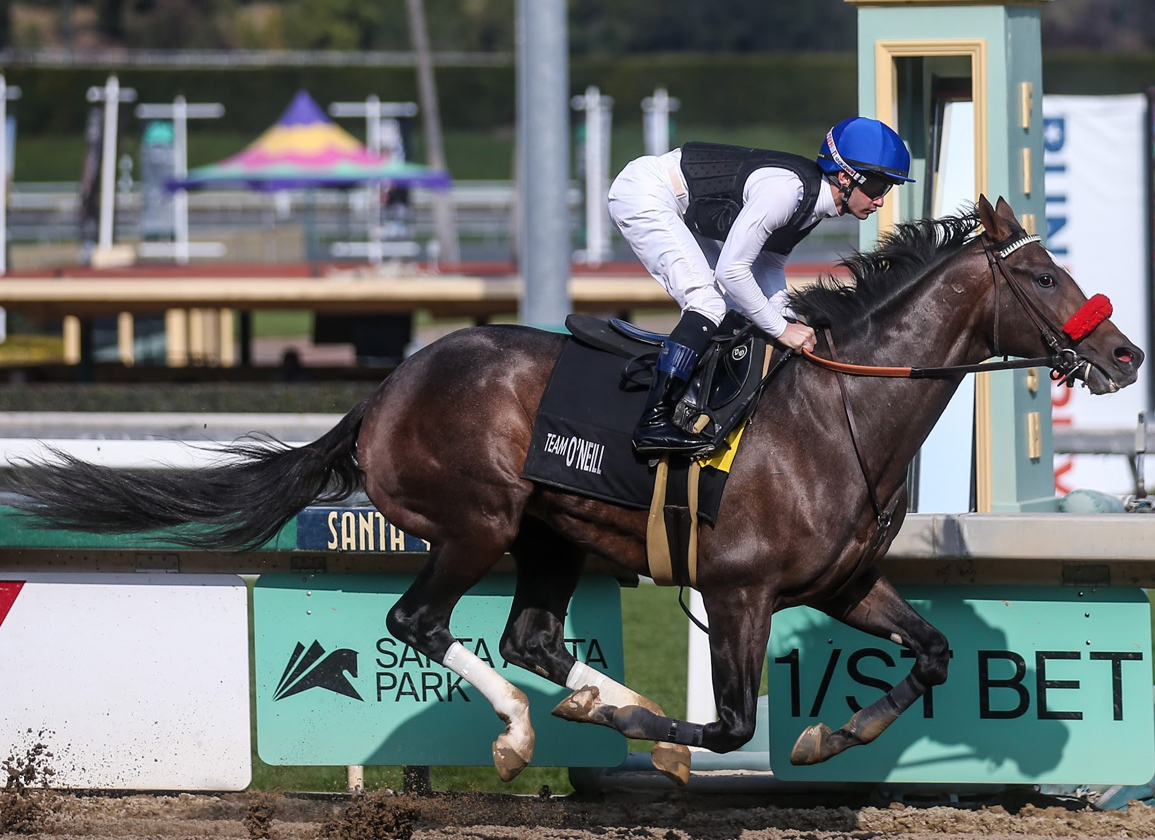 Hot Rod Charlie worked prior to the start of racing at Santa Anita Jan. 8 | Ernie Belmonte

A group of eight horses trained by Doug O'Neill led by GI Pennsylvania Derby hero Hot Rod Charlie (Oxbow) is being aimed at the upcoming Dubai World Cup Carnival at Meydan Racecourse, according to a tweet from the Dubai Racing Club Monday. The octet is scheduled to touch down in Dubai Jan. 18 and their preparations will be overseen by assistant trainer Leandro Mora, O'Neill confirmed via text Monday. It will be the second time in three years that the conditioner will be represented by horses stabled in Dubai, having celebrated an outstanding DWCC in 2020.

O'Neill indicated last month on Steve Byk's At The Races satellite radio program that Hot Rod Charlie would have the $12-million G1 Dubai World Cup as his major early-season target. The newly turned 4-year-old was most recently narrowly beaten into second by Express Train (Union Rags) in the GII San Antonio S. Dec. 26 and breezed a half-mile in :48.40 prior to the first race at Santa Anita Jan. 8. Similar to California Chrome and Curlin, each of whom prepped victoriously in Dubai prior to winning the World Cup, Hot Rod Charlie could take in a race such as the $100,000 Listed Curlin S. over the same 10-furlong distance as the main event Friday, Feb. 11.

Among the 17 horses that represented O'Neill at the 2020 Carnival was Fore Left (Twirling Candy), a two-time stakes winner on dirt in the U.S. as a juvenile who defeated 15 rivals to land the G3 UAE 2000 Guineas on his lone appearance in the desert. A would-be start in the G2 UAE Derby was scuppered when the COVID-19 pandemic claimed the entire Dubai World Cup program. New York-bred Khantaro d'Oro (Kantharos) could be on a similar trajectory, despite being a six-start maiden. Third and second in turf heats at Santa Anita in October and at Del Mar the following month, respectively, the bay ridgling was a well-beaten seventh in the grassy GIII Cecil B. DeMille S. Nov. 28, but exits a runner-up effort to the progressive Blackadder (Quality Road) on the main track in Arcadia Dec. 26.

W C Racing's Wildman Jack (Goldencents) made history at the 2020 DWCC, becoming the first American-trained galloper to land a turf race in Dubai when scoring impressively in the G3 Nad Al Sheba Turf Sprint on Super Saturday. He, too, was denied a run in the G1 Al Quoz Sprint on World Cup night due to its cancellation, but the W C Racing-bred and co-owned sophomore gelding Get Back Goldie (Goldencents) is expected to be part of the O'Neill team as well. Unplaced in a pair of dirt tries to kick off his career, the bay graduated against $50,000 maidens on the turf at Santa Anita Oct. 23 and exits a ninth in the Cecil B. DeMille.

Fore Left carried the silks of top O'Neill client Reddam Racing and that operation is set to be represented at the Carnival by 4-year-old Go On (Nyquist), a maiden winner going six furlongs in 1:08.50 at Santa Anita Oct. 9 and a latest fourth, beaten just five lengths, in the San Antonio.

According to the tweet from the Dubai Racing Club, the other four likely shippers include SW & GSP Strong Constitution (Constitution); Cal-bred stakes winner Positivity (Paynter); Appreciated (Acclamation), recently claimed for $40,000 and placed in two of three starts for the O'Neill barn; and $1-million FTFMAR graduate Notre Dame (Into Mischief), the gate-to-wire winner of a six-furlong Santa Anita allowance Dec. 26.

Thank you Greg Helm of Roadrunner Racing for taking time to speak with @tvgmike today @santaanitapark following the presentation of the Vox Populi Award to the connections of Hot Rod Charlie!

Catch all the reaction here on what this award means to the connections! pic.twitter.com/Bi35Px8YZ0