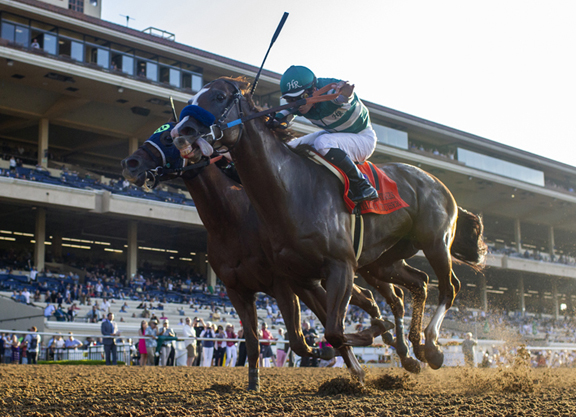 O'Neill saddled 24 winners during the stand–including five on one day July 31–to best Peter Miller for his fifth summer training title. His trainees earned $1,409,685. John Sadler boasted an impressive nine stakes wins. His 15 total wins put him fourth in the standings, but his $1,966,654 in purse earnings was the most among conditioners.

Prat took home his third Del Mar summer title–either solo or shared–in the past four seasons. He won at a strong 27% clip for the meet, visiting the winner's circle 42 times–10 more than Drayden Van Dyke. Prat's mounts racked up $2,989,976 in earnings.

After a much-publicized rash of fatalities at the Santa Anita meet, there were no racing deaths during the Del Mar stand.

“Without a doubt, this is the most gratifying meet I have ever been part of,” said DMTC CEO Joe Harper. “Given the current climate, especially after the first-half of the year in Southern California, we had three goals this summer:  continuation of our exemplary safety record; provide stability and a dependability to racing in California, and to offer a consistent, five-day-a-week schedule that would reward fans and horsemen alike.  With a wonderful display of teamwork from our owners, trainers, jockeys, vets, track personnel and the CHRB, we accomplished these goals in exceptional fashion.”

With a smaller horse population than in 2018, Del Mar carded 21 fewer races (6.6%) than it did during last year's summer meet, and all-sources handle fell by 10.9% after wagering increases in the prior two seasons.

“Based on the first-half of the year, we knew maintaining the handle trends of the last two years was going to be challenging this meet, especially running fewer races,” said Josh Rubinstein, DMTC's president.  “However, the bettors continued to support us, especially the last three weeks, when our field size rallied. At the end of the day we had extremely safe racing, handled over $432 million and paid out over $21.0 million in purses. We are very pleased.”

In 2020, summer racing at Del Mar will feature an additional weekend, as the meet will be held over eight weeks from Saturday, July 18 through Labor Day, Sept. 7. Racing resumes at Del Mar this fall, Nov. 8 through Dec. 1.