Home » Archive » Today's Edition » No Joke, It’s One Liner in the Southwest

No Joke, It’s One Liner in the Southwest 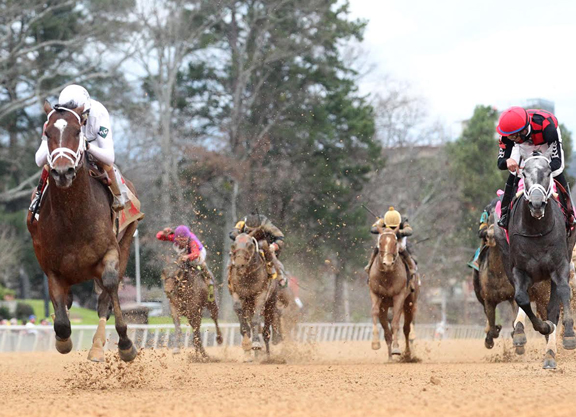 Trainer Todd Pletcher typically reserves his trips to Oaklawn Park for the GII Rebel S. in March or the GI Arkansas Derby in April, but he shipped into Hot Springs one month earlier this year and was rewarded with a convincing victory by WinStar Farm, China Horse Club and SF Racing’s One Liner (Into Mischief) in the lucrative GIII Southwest S. Monday. The undefeated colt captured his debut at Saratoga in July and entered his graded stakes debut off a smooth victory in a Jan. 26 Gulfstream optional claimer going six furlongs–an effort that sharpened him for his rallying President’s Day score.”I’m very pleased with his race,” Pletcher said after watching the race from South Florida. “He handled things very professionally. He shipped and settled in well. It looked like he finished strong and may have left something in reserve, which is encouraging.”

With his win, One Liner earned 10 points towards a spot in the starting gate for the GI Kentucky Derby May 6.

Maneuvered into an ideal spot racing in fourth behind loose-running ‘TDN Rising Star’ and post-time favorite Uncontested (Tiz Wonderful) through fractions of :22.93 and :46.55, One Liner began to gain some steam on the far turn and followed a move to the front by pace-stalking Petrov (Flatter). The bay was put to a drive as Petrov collared Uncontested, but found his best stride once straightened out for the drive and reeled in his gray rival to win going away by 3 1/2 lengths. Uncontested faded to finish sixth and Lookin At Lee (Lookin At Lucky) rallied belatedly to complete the trifecta.

“We knew he would come out running with this being his first time around two turns,” said winning rider John Velazquez. “I just wanted to save something for the end and I didn’t want to rush him. He broke real well and once he got round the first turn he relaxed for me. He pricked his ears and wasn’t really paying attention. I wasn’t concerned about getting to the other horses. I just wanted to get his attention. By the time we got to the 3/8th pole I had to get aggressive with him and let him know it was time to get busy. Then he got aggressive and then he got competitive. From there, I knew he had it won.”

One Liner won his 5 1/2-furlong debut comfortably at Saratoga July 23 and went to the sidelines for an extended respite following that effort. He worked steadily prior to his comeback victory at Gulfstream last month and signaled his readiness for more with a bullet five-furlong drill in 1:00.80 at Pletcher’s winter Palm Beach Downs base Feb. 13.

“He had shown a lot in his training before he even debuted at Saratoga, so we weren’t surprised that he won at first asking,” Pletcher continued. “We had to give him some time after that race because of some baby issues, but he came back very good and has been training good, so we were confident in him. At this point I’d say everything is in play. We’ll discuss it with the connections. We still have time for two more races if that’s the path he continues on.”

Trainer Wayne Catalano offered an honest assessment of the speedy Uncontested’s tiring effort, noting, “Everything went like we wanted it to, until the end there. He just didn’t answer the call. You’ve got to answer the call.”

One Liner was sold by breeder Kingswood Farm for $150,000 as a Keeneland January short yearling. His second dam Cayala (Cherokee Run) is a half-sister to GI Donn H. winner Albertus Maximus (Albert the Great) and GI Champagne S. winner Daredevil (More Than Ready), who campaigned for Let’s Go Stable, WinStar and China Horse Club in 2014 and 2015 before beginning his stud career at WinStar in 2016. Cayala produced a colt by Into Mischief in 2016 and was bred back to Verrazano.