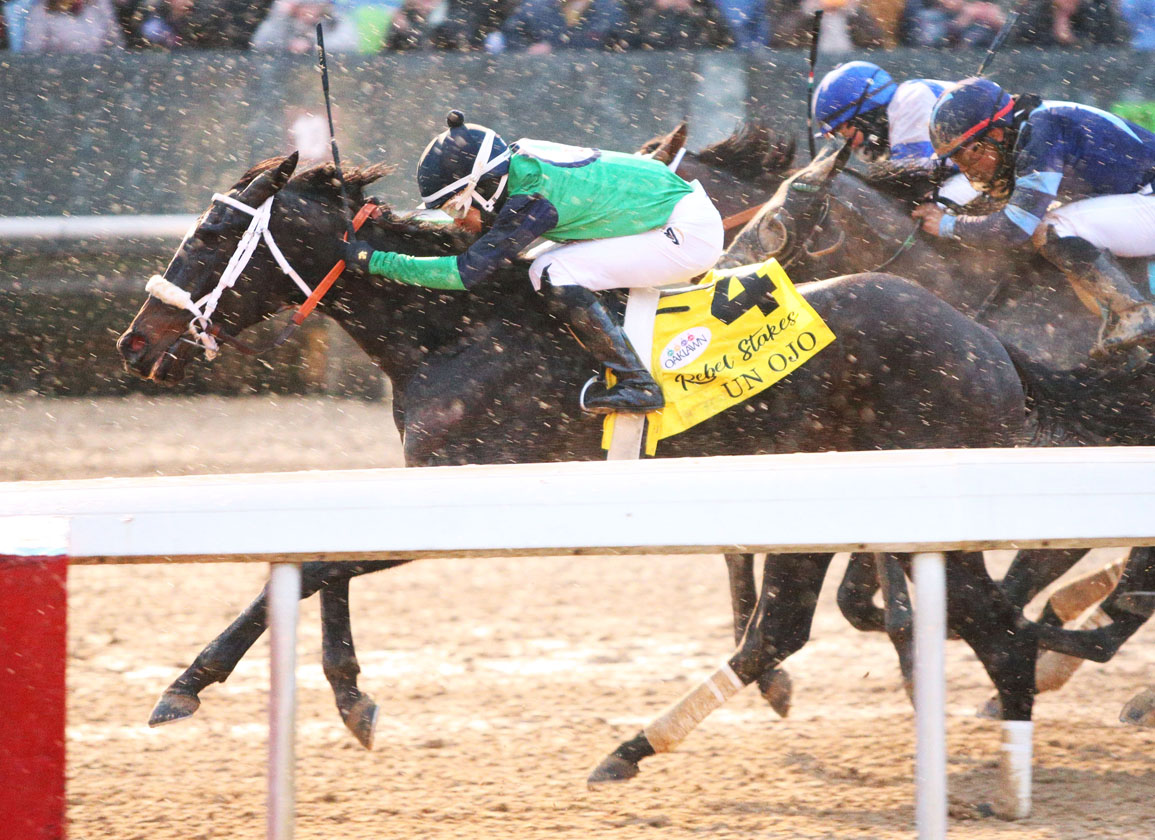 A one-eyed horse, as his name would imply, Un Ojo (Laoban) took the shortest way around over an increasingly rain-affected Oaklawn main track, and found his best stride in the final 50 yards, outfinishing an unlucky Ethereal Road (Quality Road) to cause a 75-1 upset of Saturday's GII Rebel S. in [not-so] Hot Springs.

Ridden for pace from his inside draw, Kavod (Lea) dueled inside of heavily favored GIII Southwest S. hero Newgrange (Violence) passing under the wire for the first time and made the running just off the inside through an opening couple of furlongs in :23.42. Un Ojo scraped paint from midpack early on, then was slipped a bit of rein by Ramon Vazquez to ease into third as the Rebel field reached the half-mile marker.

About the same time that John Velazquez began to get serious aboard the previously unbeaten Newgrange, Vazquez was after Un Ojo to take a shot up the fence approaching the entrance to the stretch. Unable to take full advantage at that juncture, Un Ojo was shuffled back to about fourth position as Ethereal Road, trapped out for the entire trip, rolled up outside of Newgrange to make a line of three about three-sixteenths from home. Despite doing it toughest over what appeared a very sticky surface, Ethereal Road hit the front at the furlong grounds and looked as if he was home free, but Un Ojo found his second wind closest to the rail with a sixteenth of a mile to race and was home narrowly best. Barber Road (Race Day) raced in the slipstream of the eventual winner for much of the race, lost a bit of momentum when swerving toward the fence nearing the final eighth of a mile and attacked the line to just miss second. Newgrange could do no better than sixth.

Un Ojo graduated at second asking for this trainer at Delta Downs Nov. 5 and was fourth on 15 days' rest in the Jean Lafitte Futurity before joining the barn of Tony Dutrow to take advantage of the state-bred program in New York. A narrowly beaten and troubled second in the New York Stallion Series S. at Aqueduct Dec. 18, the March foal was exiting a strong finishing runner-up effort behind Early Voting (Gun Runner) in the modestly rated and widely criticized renewal of the GIII Withers S. at the Big A Feb. 5.

“I've loved this horse since Day 1. I knew he had the talent to be this kind of horse. I always had the confidence in him. He just improved so much every single day, every single race. This is a dream come true. Two strong efforts in his last two races. Closed really well in the last two races with (trainer) Mr. Anthony Dutrow, who has done a great job with the horse. He sent him down here for us to run and he came here. We were hoping he would close good. He kind of laid a little closer than we thought. He grinded away today.”

Un Ojo is the first graded winner and fourth stakes winner overall from the second crop to the races for the late Laoban, who passed away at the age of eight last May. He is the sire's 10th black-type winner and third winner at the graded level overall.

Southern Equine Stable, who raced Laoban to a 27-1 upset in the 2016 GII Jim Dandy S., acquired the colt's multiple stakes-placed dam for $40,000 with this foal in utero at the 2018 Fasig-Tipton New York Fall Mixed Sale at Saratoga. Risk a Chance is a daughter of GSW Seeking the Ante, whose four-time stakes-winning daughter Mineralogist (Mineshaft) produced SW Can You Diggit (Tiznow). Un Ojo's third dam was dual-surface Grade I winner Antespend, acquired by Chester and Mary Bromans' Chestertown Farm for $900,000 as a horse of racing age at the 1997 Keeneland April Sale who became the dam of the Bromans' GI Florida Derby hero Friends Lake (A.P. Indy). Risk a Chance's last listed produce is a 2-year-old colt of this year by Ghostzapper, sire of Southern Equine's 2014 GI Whitney S. winner Moreno.