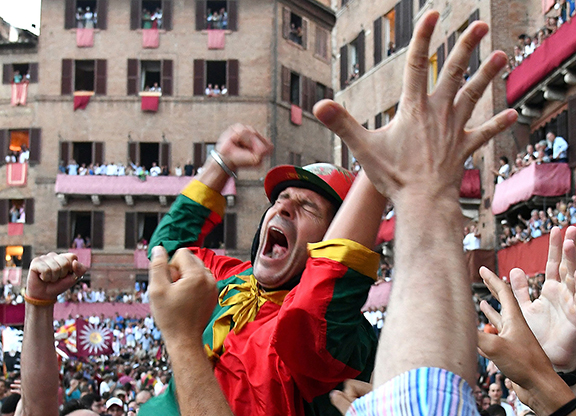 Editor's note: Today, August 16, marks the running of the twice-annual Palio, the oldest horse race on record, which takes place around the central piazza, or town square, in Siena, Italy. A group of TDN staffers covered the July 2 Palio for the September edition of the TDN Weekend. They included our videographer, Patty Wolfe.

Nothing could have prepared me for shooting the Palio in Siena, Tuscany last month–literally nothing. That my photographer position was on the track in front of the starting gate (read: rope that drops sluggishly after a deafening cannon fires) was, as young people say, “next level.”

Most of us have heard the legends of the Palio: passions flaring like fireworks, villagers beating their own jockeys after losing, bribery, theft, kidnapping, horses throwing jockeys, and jockeys whipping other horses and one another. From a distance, it's (almost) funny.

Nine years ago, I visited Siena for the first time. Our tour guide described the race while pointing at the Piazza del Campo, a modest-size medieval cobblestone village square peppered with café tables and a smattering of tourists. She told us that 17 neighborhoods, or contrade, each put a horse in one of the two bi-annual races to compete for bragging rights. Standing in Siena, I took the legends a little more seriously, but a part of me entertained the possibility that some of the hype was for the benefit of tourism.

The Palio is a serious, tribal institution as old as Siena itself with all manners of respect and dignity on the line, and not an iota for the benefit of tourists. It runs only twice a year, but lords its legend over the city every day.

We arrived in Siena the day before the July 2nd race. Celebrations and preparations filled streets. Dirt had been laid down over the cobblestone–to my relief. We trotted around to secure credentials and prove my insurance coverage for the seventh time (which finally sparked the notion that covering the Palio from the track may involve some measure of risk). The trial race that evening confirmed my new fear.

The trials are run for the horses to get accustomed to the track, the enormous crowd, and a cannon that makes every heart skip two beats within a kilometer.

Before the first trial run, I was carried off the track several times by police who could not see my temporary paper credential safety pinned to my shirt. They lifted me like a chess piece back over the guard wall. I finally connected with the officer in charge of the photographers who placed me on the track about 15 yards in front of the start rope. The officer said, “You are Patty? The American? Here.” I stood, then crouched, in the very spot he left me, motionless like a bunny in a snake's cage, for the next several hours.

I decided the telephoto lens was much too scary for me to use as I glared up and into the nostrils of the anxious horses at the starting rope appearing just several feet in front of me. My six fellow photogs were Sienese and my language barrier kept me from gleaning key safety tips and practices. I imagined that's what they were talking about. I started counting the ways I could die, when–BOOM–the ground shook.

The start cannon fired with the volume of a fighter jet breaking the sound barrier, the large rope dropped, and they were off! Well, after a few false starts, they were off. I wondered aloud if we could do the subsequent starts without the cannon. The rope drop would suffice, no? Nobody understood my helpful suggestion, or they pretended not to. The horses and jockeys took the practice at a slower-than-race pace and with less whipping of everyone and everything, but the fan excitement was full throttle.

As the horses passed us a second time the crowd emptied the stands like thin cake batter pouring from a bowl. Crouching against the wall, I did not expect the bodies that came cascading over (and on) me to chase the horses. The track was wall-to-wall people in a matter of seconds. Race day, I would be better prepared for this moment, I told myself.

TDN Publisher Sue Finley offered me the chance to beg off the on-track position on the day of the race. I considered it, being a lifelong chicken. Ultimately, I thought of my two children, as any mother would. Though I was confident I would be missed if something horrible befell me, how could I deprive them of the tale of losing their mom in an incident at the Palio? The story itself was too good to pass up. (They confirmed I made the right choice later when I discussed it with them. Cherubs.)

Emma Berry and I arrived in Siena a little before 7 a.m. the morning of the race. The tone of Siena had become a lot more serious and a little less celebratory than the day before. A crowd gathered at 7:30 a.m. in the piazza while a full Catholic mass was performed by the local clergy. The jockeys were present and blessed while everyone prayed for their safety and for the safety of the horses. My Latin is not good, but I didn't hear my safety mentioned.

I received my official credential after that. This one had a picture. The whites of my eyes could be seen around the circumference of my irises. I'm pretty sure that is a medical symptom of fear. Or is it insanity? No matter.

There was one more trial run after the mass and then we bopped around town for the remainder of the morning following horses to various churches for their blessings. There was an awful lot of praying going on. The streets were so crowded by late morning that you could keep pace moving through streets without your feet touching the ground. We never really got to select our direction; we were just carried along in people-rivers until we were let out somewhere wide enough. One time we got log-jammed under some bleachers. We saw only slivers of daylight for the next 45 minutes. For a second, I forgot I did not know the man standing behind me during this pile up, for our bodies had been pressed together for quite a while.

Every contrada has unique jockey silks, of course, which resemble loose cozy pajamas. It might be a good time to mention that the jockeys ride bareback in these silky pjs, (which explains to me how half of them slip off before the end of the race). Flags fly in the contrade year-long, waving their colors proudly. Sienese fans and tourists wear representing silk scarves around their necks. I tried shopping for a scarf to wear, but then thought better than to side with one contrada and have 16 others mad at me. I was already courting enough risk at this point.

I was late to my track position on race day. The track was already closed. I needed a police escort to walk me around the empty track in front of the massive crowds. This time my fellow shooters were waiting for me with great big smiles, like maybe they had just finished laughing or trying to suppress laughter in that moment. One of them, Giancarlo, asked me to speak on his Facebook Live and tell his followers how I came to be on the track at the Palio. This seemed to be as big a mystery to them as it was to me. I was speaking in English and Giancarlo was clearly not understanding me. I brought up a picture on my phone I had taken of Justify crossing the finish line at the Belmont Stakes just weeks before. I told them I covered racing in the U.S. They had not heard of Justify or the Triple Crown, but they clung to the topic of needing to win three races before you are crowned and discussed it at length.

Next, the longest parade in world history commenced. (I don't feel the need to fact check this proclamation. It has to be true.) The costumes, the flags, the horses were medieval and spectacular! I considered for a moment that there were as many people in the parade as there were watching. And then, where did the parade people go to watch? There isn't a square inch left. I asked Giancarlo if people were being repeated in the parade just playing different characters. That question drew more laughs. I wasn't trying to be funny.

Finally, the race was set to begin. Giancarlo gave me a serious look and warned, “After the horses pass a second time, run to the center of track as fast as you can. Then try to stay safe.”

“You mean from the jockey-less horses?” I asked.

“No, the humans! It's very dangerous. Be safe,” he warned, no longer seeing the humor in my presence on the track.

More false starts and strategic maneuvers (covert whippings of another's horse, etc) ensued at the starting rope. Post time was 7:15 p.m. The race ran at 8:40 p.m. You can imagine how many times that cannon blasted in the interim. I looked for the closest defibrillator but could see none hanging up anywhere. Bodies were carried on stretchers from the “infield” throughout the long wait, but I think they were just overheated. All hearts appeared to be beating.

When the rope dropped for the last time the horses and jockeys fought hard for inside position with almost constant turning around the small piazza. Four jockeys were thrown in the process, but their horses stayed in the hunt as they would be considered the winner with or without a jockey. As the horses came toward us a second time, I saw my fellow photographers running directly towards them. Yikes. I ran, too, reassuring myself that I would not intersect with the pack at their speed.

The stands emptied faster than the night before. Suddenly I was in the middle of a melee with no idea of who won the race. A young man decided my arm looked ripe for punching so I acquired a war bruise to show off later. I'm told by my colleagues in the stands that the track looked like a sea of elbows pumping up and down while fists pummeled unknown things.

Looking up, I saw celebratory flags for one contrada hoisted in the air and surmised the winners would be a happier (safer) group. I was able to snake my way to the victorious pile of people hugging and crying. I told myself, this is the story, and stayed there a long time.

Ironically, the winner was a horse whose blessing I had attended earlier in the day. And I had a quiet moment with him outside his stall, which was decorated like a church. The Palio is not for the faint of heart, nor is the start cannon, but it is the most extraordinary scene you could imagine for the oldest horse race on record.

I highly recommend visiting Siena and watching the Palio for yourself…from a balcony.

Intelligent, extensive and colorful coverage of the Palio can be found in the September TDN Weekend by Emma Berry. I hope you enjoy the images.