Home » Archive » Europe » On The Rhode To Victory

On The Rhode To Victory 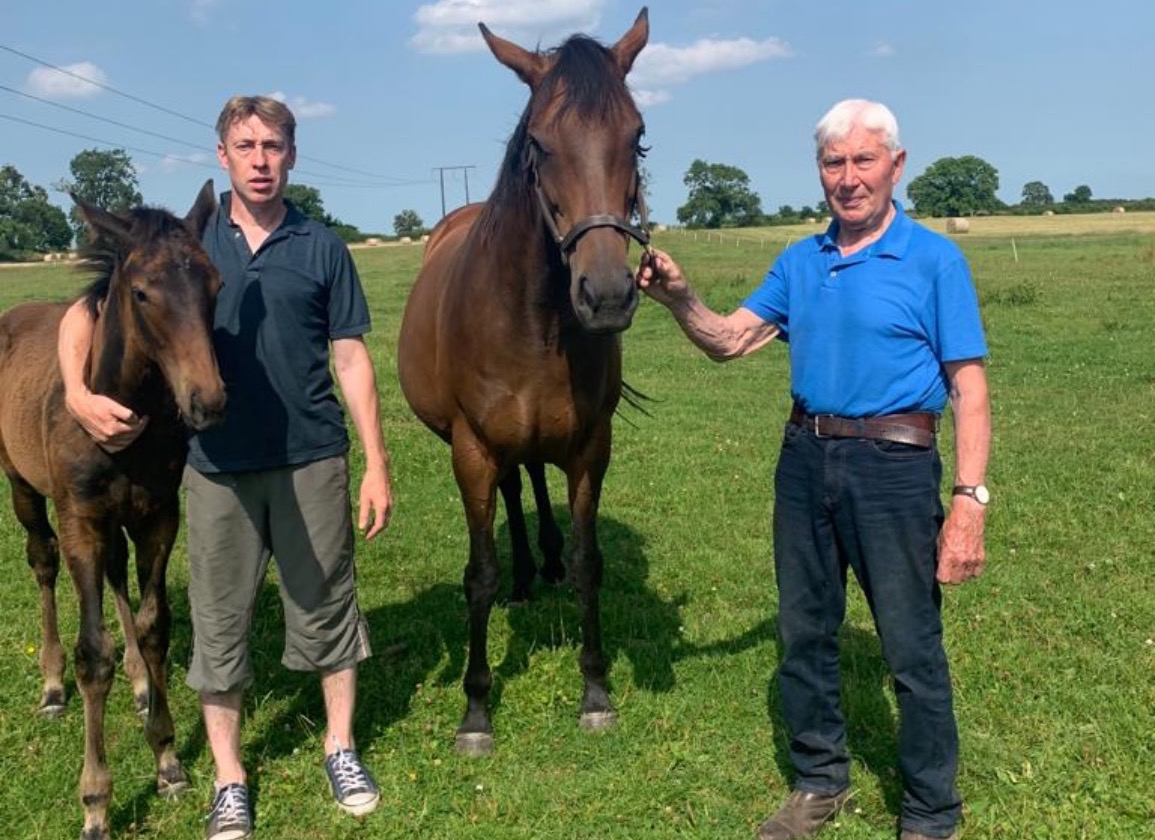 The village of Rhode in the Irish heartland of County Offaly may be better known for its peat but it can also boast a growing reputation as home to some of the stars of the racing and breeding world.

The most recent comet to shoot to prominence having been raised on its turf is Gubbass (Ire) (Mehmas {Ire}), winner of Saturday's Weatherbys Super Sprint for Richard Hannon and owner Jassim Bin Ali Attiyah. The youngster was bred at

Ballyheashill Stud in Rhode by Barry Lacy and his father Tom, the former jockey, trainer and mentor to many a young person starting out in the racing business.

“We would be known as bogland around here, so people say 'oh you're from the bog” and we have to put up with that,” says Barry Lacy, whose brother Tony is one of Ireland's many 'wild geese' and was recently appointed Keeneland's vice director of sales in Lexington.

He adds, “But when it comes to the land the proof of the pudding is in the eating and the amount of good horses that have come out of this little pocket here in recent years is pretty staggering. Derek has had some amazing results.”

The neighbour to whom Lacy refers is Derek Veitch, owner of Ringfort Stud with his wife Gay. Their growing number of stakes winners includes the G2 Duke of Cambridge S. victrix Indie Angel (Ire) (Dark Angel {Ire}), bred in partnership with Paul Hancock, as well as last year's G2 Lowther S. winner, Miss Amulet (Ire) (Sir Prancealot {Ire}), and the last two winners of the G2 Gimcrack S. in Threat (Ire) (Footstepsinthesand {GB}) and Minzaal (Ire) (Mehmas {Ire}). It's not completely unthinkable that the race could go to another Rhode-bred this time around as the unbeaten Gubbass already has a Gimcrack entry, through Hannon has identified the G2 Qatar Richmond S. at Glorious Goodwood as his likely next target.

“We can dare to dream,” says Lacy. “Look, the horse won on Saturday and it was fantastic but we get as much of a kick out of watching Roundabout Magic (Ire) (Zebedee {GB}), who we bred, win for Simon Dow at Lingfield. He's seven or eight, still a colt, rated in the 50s and I think he's won eight races. I love those tough, sound horses. Horses like that, that are still sound and loving it, they give you a great kick and they are hard to find. And they don't have to be stars but that just does your heart good.”

So speaks a man who has been involved with the riding and training of horses for a lifetime. Sales-ring touches are fantastic, and fast, early 2-year-olds help a mare's commercial value, but at the crux of it all is breeding robust individuals who will stand up to the work required, both mentally and physically, to get them to the racecourse and into the winner's enclosure.

“Gubbass looks like he's a black-type horse and for a mare to have a horse like that as her first foal is just wonderful,” he adds. “It's also lovely vindication for mum as she would have watched all the foals walking round from the kitchen window over the years and she called it first, that the Mehmas colt was something special.”

Lacy's mother Margaret is the sister of Paddy Behan, breeder of a superstar under another code, the nine-time Grade 1-winning jumper Altior (Ire) (High Chaparral {Ire}).

Along with the former training stable, Tom and Margaret Lacy have always kept “two or three mares” and played something of a key role in one of Ballylinch Stud's major families as the breeders of Group 3 winner Ingabelle (GB) (Taufan {GB}).

Lacy recalls, “In the 1970s dad bought a filly by Falcon (GB) who turned out to be Bodelle (GB). She was quite a good race filly and got black type on the Flat and over hurdles. Her first foal was Ingabelle, who became an important foundation mare for Ballylinch Stud. We kept the first two foals out of her, a colt and a filly, and we still have one grand-daughter here.”

The Ballylinch connection continues through one of the three mares currently on the farm, Gubbass's 7-year-old dam Vida Amarosa (Ire), a daughter of Ballylinch stallion Lope De Vega (Ire).

“We had originally been interested in her half-sister Queen Of Power (Ire), who ran in the Guineas at the Curragh. My brother Tony had asked me to have a look at her but for some reason we didn't end up going for her. Then this Lope De Vega filly came out of the blue,” he continues.

“In the meantime when we stumbled across this filly, as she was at the time, I noticed that Queen Of Power had had an Acclamation (GB) colt foal who went through the sale for €130,000, so I thought to myself 'he must have been nice', and it was almost another reason to use Mehmas. We'd been interested in that family for quite a few years but looking at them is one thing, buying them is something else.”

As it was, Vida Amorosa wasn't too hard to buy and she was picked up as a 3-year-old at the Goffs February sale for €1,200 and sent to Mehmas the following year. Following a record-breaking start with his debutants, the Tally-Ho Stud stallion shows no sign of slowing up. And in fact the O'Callaghan family of Tally-Ho are now the owners of Gubbass's full-brother, having paid €75,000 for him at last season's delayed Goffs Foal Sale the week before Christmas.

“He was one of only about three colts by Mehmas at that sale last year and we had the impression that they were crazy about Gubbass [at Hannon's]. Word must have filtered down because it wasn't just Tally-Ho bidding on him. He was in the last 10 lots on the first day of Goffs and everybody stayed around. We thought they were hardly here for our horse, but as it turns out they were,” says Lacy.

Vida Amorosa is being rested this year having produced a colt quite late in the season by another Tally-Ho resident, Inns Of Court (Ire).

Reflecting on the mating that produced Gubbass, Lacy says, “I suppose we broke the golden rule in a way, in that she was an unproven mare–she'd never run or had a foal–and we sent her to an unproven sire. If you were to tell people starting off, you'd tell them not to do that but we were so strong on Mehmas. We just absolutely loved him. Physically they just seemed to match each other. She was a big, scopey filly with a big walk, and Mehmas just has that quality. It made sense physically and I could see how Acclamation was working with the family.”

The Acclamation colt foal out of Queen Of Power previously spotted by Lacy is now known as the listed-winning sprinter Garrus (Ire), who was recently fifth in the G1 Diamond Jubilee S. at Royal Ascot.

Gubbass was himself consigned to the yearling sales by Tally-Ho Stud on the Lacys' behalf, fetching £28,000 at the relocated Tattersalls Ireland September Sale. His appearance at the auction came at a sad time for the racing industry in the week following the death of Pat Smullen, who was easily Rhode's most famous son.

The nine-time champion jockey readily admitted when reflecting on his illustrious career that he owed his start in racing to Tom Lacy, and indeed Smullen rode his first winner as his apprentice on the Lacy-bred and -trained Vicosa (Ire) (General View {GB}) at Dundalk in 1993.

“Patrick only lived down the road from us and we can't exaggerate how much he meant to all of us,” says Lacy of his much-missed friend. “I'm looking out across the paddocks now and about three fields across from me is where Patrick and Frances live, and then if I take a drive two minutes down the road I'm at Derek Veitch's, and another 15 minutes and I'm at Tally-Ho. So we're surrounded by likeminded people.”

He adds, “I was at the yearling sales in Newmarket with Gubbass at the time of Patrick's funeral and it was very hard for none of us to be able to go. We lost somebody very important round here. It's hard to exaggerate the effect that it had on the local area. It was like losing your Muhammad Ali, your hero.”