Home » Archive » On Aftercare: Who is Donner

On Aftercare: Who is Donner 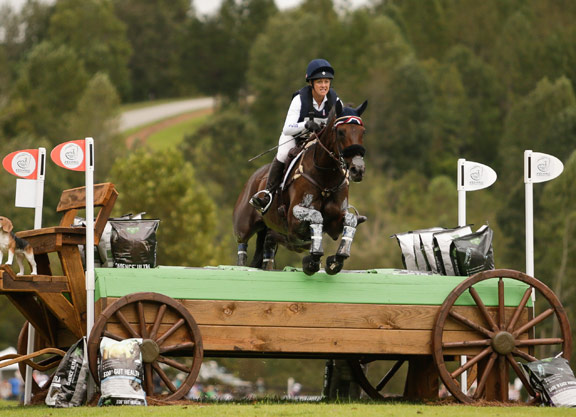 Who is Donner, also known as 'the deer'? He ran as Smart Gorky, a 2003 NY-bred by Gorky Park out of Smart Jane (Smarten). He raced six times, never hit the board and earned only $2,870. He retired at age three and by his fifth birthday, he was in the capable hands of event rider Lynn Symansky.

Donner is aptly nicknamed 'the deer' because of his flighty personality in addition to his leggy athletic frame.

“He is not the bravest horse,” said Symansky who has owned, trained and competed him for the past 10 years.

On day two, horses and riders gallop a technical four-mile cross country course over 45 daunting obstacles, which include ditches, water, large jumps of every shape and combinations of all of the above. Each individual horse and rider team is judged on time as well as faults.

Symansky and Donner debuted on the sanctioned event circuit in 2010 and have competed consistently at the highest levels. They finished fifth at Kentucky's Four Star Event (formerly Rolex, now known as Land Rover) (video). The pair have represented the United States twice at both the World Equestrian Games, and at Burghley in England where this video was taken in 2017.

How did Donner, a failed racehorse, rise to the top of a sport that is clearly not for sissies? Symansky found the champion in Donner by taking her time and watching the signals he gave about his readiness to advance.

With patience and a willingness to listen to Donner and let him dictate the pace of their rise, Symansky coaxed a brilliant diamond of a competitor from the rough.

“In some ways he isn't the most likely candidate,” said Symansky. “He is not naturally brave and he is a little bit spooky. But, he always showed up 100% willing and ready to work, and he clearly liked the job. So, I listened to him and advanced him at his pace.”

She added, “Mostly, Donner has huge heart and that has been the underlying reason for our success.”

By building strong basic skills and a relationship through ground work as well as riding, she brought him from the back of the pack in racing to the top of the heap in international eventing competition. In 2018, at 15, he is in top form and having his best year.

After the dressage portion of the competition at WEG 2018, they were in 17th place out of 83 horses with a personal best dressage score. His clean and fast cross country run put him in ninth place and the highest American horse in the competition. Overall, they placed 25th in the event because they knocked down three rails in stadium jumping, the third leg of the event, which was delayed a day because of Hurricane Florence.

“I knew that the unscheduled day of rest wasn't good for us, said Symansky. “But, he tried his best under the circumstances.”

Donner isn't Symansky's first off-track Thoroughbred to reach the advanced level of three-day competition. Her first was No It Tissant, a WV-bred by Admiral's Flag.

On choosing a Thoroughbred, Symansky looks for certain physical attributes like an uphill build and long legs. She said the prospects don't have to have a beautiful trot to begin with because that is something she can build on.

“The horse has to show natural ability to jump,” added Symansky. “In transitioning a Thoroughbred, I build a partnership, do ground work and really focus on fitness and building a top line. And, I always let the horse tell me where he belongs.”