On Aftercare: Foxie G Foundation Making a Difference in Maryland 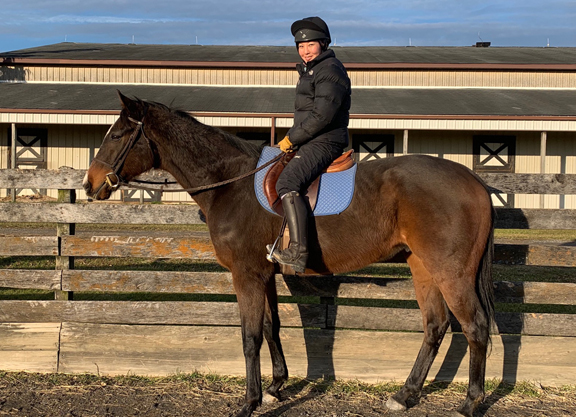 The Foxie G Foundation, located in Libertytown, MD was named for Foxie G, a Maryland-bred Thoroughbred gelding by Horatius. Laurie Calhoun and her husband Jerry bought the farm where the Thoroughbred rescue resides more than 30 years ago and ran it as a commercial Thoroughbred operation. They bred horses, sold horses, did lay ups, and specialized in rehabilitating injured racehorses. They even trained racehorses for a period of time. Retraining and re-homing came naturally to them and they did it often.

“We come from riding horse backgrounds,” said Calhoun. “So, we just began automatically re-homing horses for people. Plus, the farm is really well set up for rehabilitating horses the right way. We have big fields, paddocks of all sizes, and three round pens, including a double round pen, as well as a riding ring.”

In 2012, they decided to create the nonprofit Foxie G Foundation and Laurie devotes her entire time to it with the help of her sisters who live nearby and her board of directors.

Foxie G was a client's horse. While spending time lay-up time at the farm, he earned a special place in the hearts of the Calhouns. After he had returned to the track, they received word that he developed laminitis and needed to retire. They contacted the owner and offered to take the gelding, who was seven at the time, having earned $392,500. It was a long road to recovery.

“We had the facility and the support from our veterinarian and farrier to stabilize his condition,” said Calhoun. “Without them, he would not have survived. We were able to give him eight years of happy retirement. He deserved that and to be honored with the foundation name.”

Calhoun believes that all horses deserve a chance at a peaceful retirement or a second career and that drives the multifaceted organization. They have a rigorous retraining and adoption program which averages more than 40 adoptions a year. They place horses which are not sound enough to carry weight in equine assisted therapy programs such as the highly successful Baltimore County Agricultural Center Equine Program and they maintain sixty-nine pensioners, some of whom need special care.

Foxie G receives most of its horses from the Maryland Jockey Club program: Beyond the Wire. Others come from their connections on the track. And still others are rescued from a kill-pen in Pennsylvania.

“It's not just the livestock auctions that have the Thoroughbreds,” said Calhoun. “Its private individuals who make their living finding horses and selling them, if possible, before they go to slaughter.”

“It is amazing how much the industry has accomplished in terms of keeping Thoroughbreds from going to slaughter,” said Calhoun.” We rarely find horses that have recently raced in the kill pen. Rather, we mostly find older Thoroughbreds who haven't raced in a long time and retired broodmares,” said Calhoun. “I have a special place in my heart for the unwanted broodmares. They had two careers already and then they get thrown away.”

In the Baltimore County equine therapy program, which is less than one year old, the Foxie G horses are stars. They are helping veterans and first responders.

“In our first 6 months of classes in 2018, we had 64 veterans participate in equine assisted therapy with off-track Thoroughbreds through the Saratoga War Horse program,” said Suzanne T. Berger, Equine Programs Manager. “The feedback from the participants and their families has been just amazing. We are looking to easily double that number for 2019 and hope to build on our first-responders program while increasing awareness and support for the Thoroughbred rescues that participate. The results are truly life changing for many of the participants.”

Calhoun is thrilled with the partnership.

“That Thoroughbreds who are not sound enough for riding can have such an impact and help people on that scale is a dream come true,” said Calhoun. “The program needs to be replicated in every county to serve all of the people and horses who need help.”

Who is Calhoun's favorite horse currently up for adoption at Foxie G?

“It's Cruise More (More Than Ready),” said Calhoun. “He retired at ten after 46 starts and he is sound. He earned more than $200,000. And now, he is a lovely horse to ride. He likes people and we hack around on the buckle.

“Older horses are great partners. That is one thing of which I am always trying to convince people. They still love work but they are more professional and happy to go a little more slowly.”

One of Calhoun's wishes is for a sanctuary fund to help the many unsound horses.

“So many horses who ran their hearts out but have arthritis or old injuries making them unadoptable need long-term and even special care,” said Calhoun. “They deserve the effort.”

Kaitlin Sennewald, an 18 year old high school senior who adopted her horse, Street Poet, from Foxie G, decided to take on the challenge for the Foxie G pensioners. For her Girl Scout Gold Award, she opted to revamp the Foxie G sanctuary horse fundraising program.

“I had a very positive experience adopting my horse from Foxie G, so in considering options for my Gold Award, my immediate thought was to do something for the unsound horses,” said Sennewald. “These are the horses needing the attention and awareness.”

Foxie G will be launching the inspiring new campaign this spring.

Sennewald graduates this year and will be attending the University of Maryland to study aerospace engineering.

“Kaitlin made an extra effort to show supporters just how special these horses are,” said Calhoun. “Whether it's one of the mares whose racing record we can't decipher, or Ravalo, who earned $1.3 million, they are all deserving of a great retirement even when they cannot be ridden.”

The Foxie G Foundation is accredited by the Thoroughbred Aftercare Alliance.