Home » Archive » Shared News » On Aftercare: For Portal, Connections Who Care Came Through

On Aftercare: For Portal, Connections Who Care Came Through 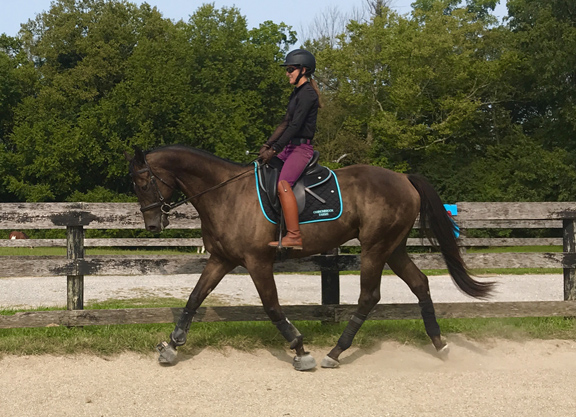 Evergreen Stables was a claiming partnership of individuals, friends, family and connections–not all of whom knew each other–with trainer Jordan Blair. On May 23, 2019, Blair claimed Portal (Arch), a late foal of 2014, at Churchill Downs for $40,000.

“Portal was a super cool horse and he was being trained by a good friend Ian Wilkes,” said Blair. “We had been watching him and he was running well. Plus, he is a beautiful, striking almost black horse and had a neat personality.”

Portal won the next two times out in allowance races at Churchill and Ellis Park and gave the owners their most exciting wins ever as an entity. In his fourth race for Evergreen, at Keeneland, Portal didn't finish and was vanned off after being pulled up on the backstretch by Miquel Mena. In his lifetime, Portal earned $161,513 in 18 starts.

“He took a bad step and they brought him back on the ambulance but he walked off fine,” said Blair. “He fractured his sesamoid with a clean break. It was a career-ending, but not life threatening injury nor was it recommended for surgery.

“We started what we knew would be a long recovery at the barn and after a few weeks brought him up to Brian and Jamie Hernandez's barn for continued rehab.”

There was never any question that Evergreen was going to pay for Portal for as long as necessary until he found a home.

“It is so important to us and for the industry that owners keep their commitment to the horse,” said Debbie Appel, a partner in Evergreen and currently co-owner of Surfside Stables that also has horses with Blair. “We didn't know most of the other people in Evergreen but everyone agreed, without question, that we would see our commitment to Portal through to the end.”

After a few months of stall rest, the Blairs began calling and emailing aftercare organizations to place Portal, but that proved difficult.

“He was turned down by every aftercare we called,” said Blair. “The injury was the main problem. No one felt confident in the vet's prognosis which was that he would be sound for flat work, dressage or trail riding.

“Finally, through Jamie Hernandez, we were introduced to Amelia Foster who buys and sells off-track Thoroughbreds.”

Foster, too, was struck by Portal's looks and drawn in by his friendly demeanor.

“He is super fancy and at first I was thinking of what a great sale prospect he could be because he was eligible for the Thoroughbred Makeover,” said Foster. “But when I learned more about the diagnosis, care and meticulous rehabilitation process to date, I decided to keep him for myself and take any pressure off of him.

“The trainer and owners had done everything right–to the letter–for this horse and if they were not confident that I was going to do the same, Portal would not have come to me.”

Today, Portal is learning dressage and also teaching novice riders the basics. The personality that had endeared himself to so many people along the way only blossomed and he is one of the easiest horses at Foster's Cannonbrook Farms to ride.

“When I first got on him, I could not believe how gentle and smart he acted,” said Foster. “I said to myself that this is a testament to how he was handled for the first six years of his life.”

Foster was not put off by Portal's injury or the vet's somewhat guarded prognosis.

“In my experience, if you follow the rules and do what the vet says, horses will heal,” said Foster. “Plus, I have no agenda for him. He is going to tell me when he is ready to do more. So far, he has never taken a lame step.”

“I am thrilled whenever Jordan sends me pictures of Portal in his new life,” said Appel. “While the partners in Evergreen were all supportive of his efforts, Portal was saved because of Jordan's commitment and dedication to him. I was at Keeneland for Portal's race and witnessed first hand how deeply Portal's injury affected Jordan. His care of and commitment to Portal, as well as to all the other horses in his barn, is unparalleled.”

“Portal was a lot of fun and brought a lot of joy for a lot of people. We couldn't be any happier about where he is now.”