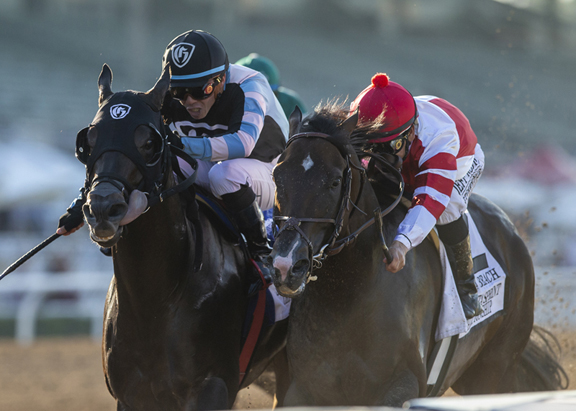 Owner Rick Porter still isn’t sure which Breeders’ Cup race his multiple Grade I winner Omaha Beach (War Front) will run in, but he knows that it won’t be the 3-year-old’s last race.

Porter told TDN that Omaha Beach will conclude his 3-year-old season in the GI Malibu S. and then will be pointed for the GI Pegasus Word Cup Invitational Jan. 25 at Gulfstream Park. The Malibu is traditionally run Dec. 26.

“As long as he is doing well, we’re going to go in the Malibu,” Porter said. “It’s for straight 3-year-olds and probably would be an easy spot for him. I had talked to [trainer] Dick [Mandella] and asked him about running in the [GI] Cigar Mile and he said there was no point shipping all the way to New York, coming back to California and then going to Florida when he could stay home and run in the Malibu.”

The breeding rights to Omaha Beach were acquired by Spendthrift Farm in April after the colt won the GI Arkansas Derby and before he was a late scratch for the GI Kentucky Derby due to an entrapped epiglottis. Porter said that the contract he signed with Spendthrift includes a provision where the horse can run in the Pegasus.

“I hate to have to pay to get him into a race, but with a $9-million purse you can’t help but look at the Pegasus,” Porter said.

As far as whether Omaha Beach will race after the Pegasus or go to stud, Porter said that has yet to be determined. He said a final decision will be made after he consults with Spendthrift.

After being sidelined for nearly six months, Omaha Beach became the talk of racing when he caught the tough sprinter Shancelot (Shanghai Bobby) to win the GI Santa Anita Sprint Championship by a head in his return Sept. 28.

“This horse has a lot of talent,” Porter said. “One hundred yards before the wire in that race at Santa Anita I didn’t think he was going to win. It showed that this horse doesn’t like to lose.”

The Santa Anita Sprint was just Omaha Beach’s third start of the year, a reason why Porter and Mandella believe they should have a fresh horse after the Breeders’ Cup. Porter said he has left the decision on which race to enter in the Breeders’ Cup totally up to Mandella, and even though the trainer has not given him a definitive answer on what race he will choose, Porter said he’s all but certain the choice will be the GI Breeders’ Cup Sprint.

“Unfortunately the Sprint is probably the toughest race among the three choices we have [Mandella has also mentioned the GI Big Ass Fans Breeders’ Cup Dirt Mile and the GI Longines Breeders’ Cup Classic], but I’m almost positive that that is the race Dick is going to choose. He doesn’t think he can have him ready to go a mile-and-a-quarter in the Classic and he doesn’t believe the Dirt Mile is prestigious enough. I talk to him every day and with the way he has been talking I can tell that he’s made up his mind and wants to go in the Sprint.”

Porter believes that a victory in the Sprint will put Omaha Beach in the running for an Eclipse Award as the nation’s top sprinter and 3-year-old.

“We’d have to win the Classic to have any shot at Horse of the Year,” he said. “But I’d have to think he would be a strong candidate for 3-year-old and sprinter of the year if he were to win the Sprint. It would be hard to ignore what he’s accomplished this year.”