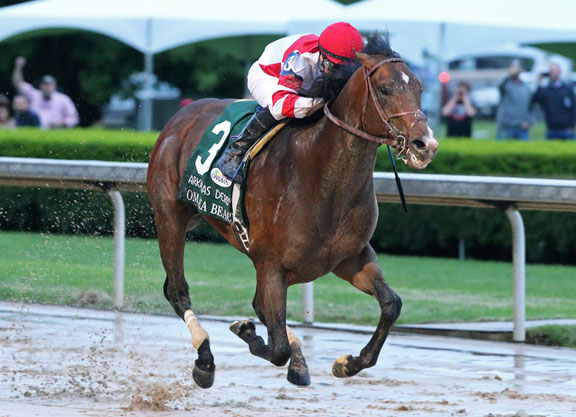 By Summer Tan, out of Fleet Valor. By Allied Flag, out of Joy Of Spring. And by Tactical Cat, out of Shoreline. Just three among several Thoroughbreds who had already borne his name before a son of War Front offered, as the GI Kentucky Derby favorite, to commemorate the 75th anniversary of the Normandy landings.

In the event, of course, Omaha Beach instead reminded us that destiny seldom obeys our own sense of aptness. His late withdrawal, with an entrapped epiglottis, confirmed its disobligingly random ways.

But that is not to say that fate is always inexorable. Otherwise there would have been no point to the bravery of those men wading ashore in 1944. We have to believe that our own efforts can help to determine the course of events. Our efforts, and our skills. And now, after a five-month disappearance, we are about to find out whether one of the most skilled of all contemporary horsemen, Richard Mandella, can ensure that the ultimate fulfilment of Omaha Beach has only been delayed-rather than thwarted altogether.

The stakes for his comeback, in the GI Santa Anita Sprint Championship, are certainly high for Spendthrift, who acquired the breeding rights in a Derby favorite, but have been unable to test the value of that investment since.

As things stand, Omaha Beach has made five of his seven starts in maiden company; while the two Baffert colts he beat in breaking into the elite of the crop, Game Winner (Candy Ride {Arg}) in a division of the GII Rebel S. and then Improbable (City Zip) in the GI Arkansas Derby, appeared to moderate their juvenile stature somewhat when fifth and sixth past the post in the Kentucky Derby. That's not the easiest resume to quantify with a stallion fee, even if Country House (Lookin At Lucky) himself was beaten nearly seven lengths into third in the Arkansas Derby.

What we do know is that he's going to a farm smart enough to give him every chance, however things go from here. But it's a captivating crossroads, not least because the people around Omaha Beach–with a completely free hand, now that they are no longer obliged to stretch his brilliance over Classic distances–have taken a radically different turn in dropping him back to sprinting.

Obviously going shorter rather than longer is fairly standard procedure with any horse ending a lay-off. If he is to move forward Saturday, mentally and physically, Omaha Beach hardly wants to be pushed to any kind of physiological limit. Nonetheless there is already talk of confining his Breeders' Cup options to the GI BC Sprint and the GI BC Dirt Mile, with even a Classic as porous as this one already off the agenda.

Possibly it just seems sensible, with such a troubled summer behind him, not even to think about exposing the colt unnecessarily to a more grueling examination. On the other hand, perhaps those closest to him always had it in the back of their minds that his real metier was always going to be speed.

Not at first, clearly, because he made his first three juvenile starts over a mile on turf. It certainly makes sense on paper, however. When he burst onto the scene in the spring, the focal point of his pedigree was naturally his grand-dam Take Charge Lady (Dehere), especially after her son Take Charge Indy (A.P. Indy) produced Long Range Toddy to win the other division of the Rebel. But her inherent distinction, both on the track and in her second career, should not distract us from a key element in Omaha Beach's pedigree: the fact that both Take Charge Lady and War Front are out of mares by Rubiano, dashing winner of races like the GI Carter S. and GI Vosburgh S.

On the face of it, hardly the first name you'd seek 3 × 4 in a Kentucky Derby colt. On the other hand, Rubiano was out of the same mare as Tapit's dam Tap Your Heels, who was by a son of his own sire, Fappiano, in Unbridled. And their dam, in turn, was by the bottomless Classic influence Nijinsky out of a sister to Relaunch. So it was perfectly credible to have Omaha Beach on the Triple Crown trail, not least given the two-turn reinforcements available along his bottom line.

Take Charge Lady's son champion Will Take Charge (Unbridled's Song) had top-class form at 10 furlongs, for instance. That said, Omaha Beach's full-brother was pointedly confined to sprints during a modest career at Ballydoyle; and their champion half-sister Take Charge Brandi (Giant's Causeway) was never able to explore Classic distances. (Their dam Charming {Seeking The Gold} broke down on only her third start, when odds-on for a stake over a mile.)

We should always avoid being too prescriptive with pedigrees, of course, but that would seem especially true here. War Front, for instance, gained a turf reputation simply through opportunity, as one of few Kentucky sires in recent years given meaningful opportunity in Europe. Remember that one of his very first European envoys, Declaration Of War, shared a three-way photo (along with Mucho Macho Man {Macho Uno} and none other than Take Charge Lady's son Will Take Charge) on his dirt debut in the GI Breeders' Cup Classic. Whatever else he does, then, Omaha Beach has already helped to correct some lazy misapprehensions about his sire.

Like another son of Danzig in Danehill, moreover, War Front has also proved a versatile influence in terms of distance. In the case of Omaha Beach himself, we have some “proof of the pudding” in the way he saw out nine furlongs for his Grade I success. True, both then and in the Rebel he coasted through the race with conspicuous leisure. Nonetheless it would be pretty remarkable if he were able to bounce out and beat a specialist as blisteringly fast as Shancelot (Shanghai Bobby). (Curiously, the opposition also includes Flagstaff {Speightstown}, who bids to settle a family grudge against the colt who wrecked the unbeaten run of his half-brother Game Winner.)

As such, it would seem unfair to expect more than some kind of legible signpost to the way ahead. On the face of it, persevering with sprinting at the Breeders' Cup might give him some extra commercial glitz at stud. But those in charge of the whole package–which matches his classy and very flexible genes with an unmistakable aura of class, whatever gilding he can add hereafter–hardly need telling that what works best for Omaha Beach the racehorse will ultimately work best for Omaha Beach the stallion.

To that extent, with so much still to learn about his capacities, it would be nice to think that the door might yet be ajar to a 4-year-old campaign. Regardless, you have to wish the horse's connections well. Besides their maddening summer with Omaha Beach, remember the deal that determined his future was never purely about dollars and cents: Rick Porter, his owner, says that he owes his life to B. Wayne Hughes of Spendthrift, whose support of pioneering cancer treatments at Massachusetts General Hospital opened the door to a game-changing clinical trial.

An intervention, typical of so many critical moments in life, shared between the determination of mortals, on the one hand, and sheer luck on the other. And there's a combination that was greatly respected, 75 years ago, on the beaches of Normandy. So who knows? Maybe it will turn out that fate, or fortune or whatever else you care to read into Omaha Beach's ability to run fast, has reserved these gentlemen some kind of gratifying denouement, after all.